SUB – Below the threshold of sensation or consciousness; perceived by or affecting someone’s mind without them being aware of it.

“Having had recent experiences that formed my outlook into a particular shape and feeling, the simple prefix of ‘sub’ kept recurring in my mind… suboptimal, subtract, substrate, subterranean…meaning secondary, less, before, underneath. I had been contemplating the powerful effects of such plain language on our psyche and wellbeing in these modern times, and in relation to geography as well as systems of class, and of perception.

While staying in an off-grid 1970’s stone cottage elevated on an escarpment in the beautiful Victorian bushland with views across an expansive valley, I had time to think about the many meanings of ‘sub’ while looking at the vista below. I thought about heights and depths, vantage points, distance, the dynamic between elements that are below or hidden, and their relationship to the surface. It was around this area that we found the old gold diggings – an area thick with discarded machinery strewn across the densely pine-needled ground, eerily silent, an open coffin of gold dreams laid to rest. Each piece of equipment, beautifully patinaed in deep crimson rust, played a role in the story of massive human endeavour – a pipe, a ring seal, an elbow, a track, a winch – each one shaped by ambition and desire into the longing for prosperity, huge amounts of desperation, and endless prayers for sheer luck. It made me wonder about the lengths we go to, in striving to unearth something precious in order to exploit its value. I considered just how much individual inner, personal ‘gold’ could be drawn upon instead by simply acknowledging and believing in its quiet and limitless existence. And how some things that may remain conserved and undisturbed are in fact more powerful than we could ever know.”

Saint Cloche welcomes back Melbourne-based artist Bec Smith as she continues her evolution staying true to her signature geometric shapes revealing her background as a designer. Her colour palette always a mix of muted pastel and deeper tones – in SUB Bec meditates on a special experience and an unforgettable sense of place. 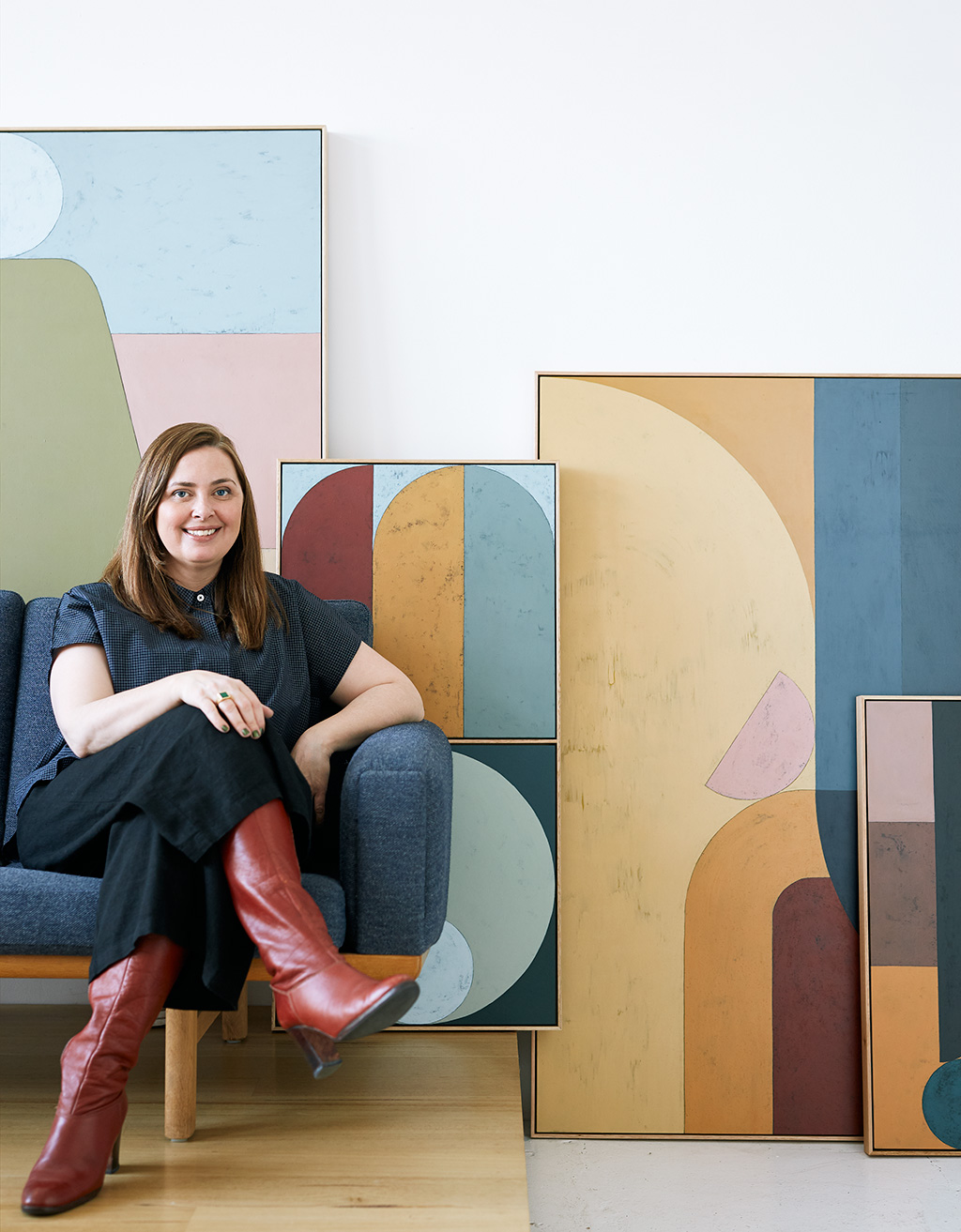 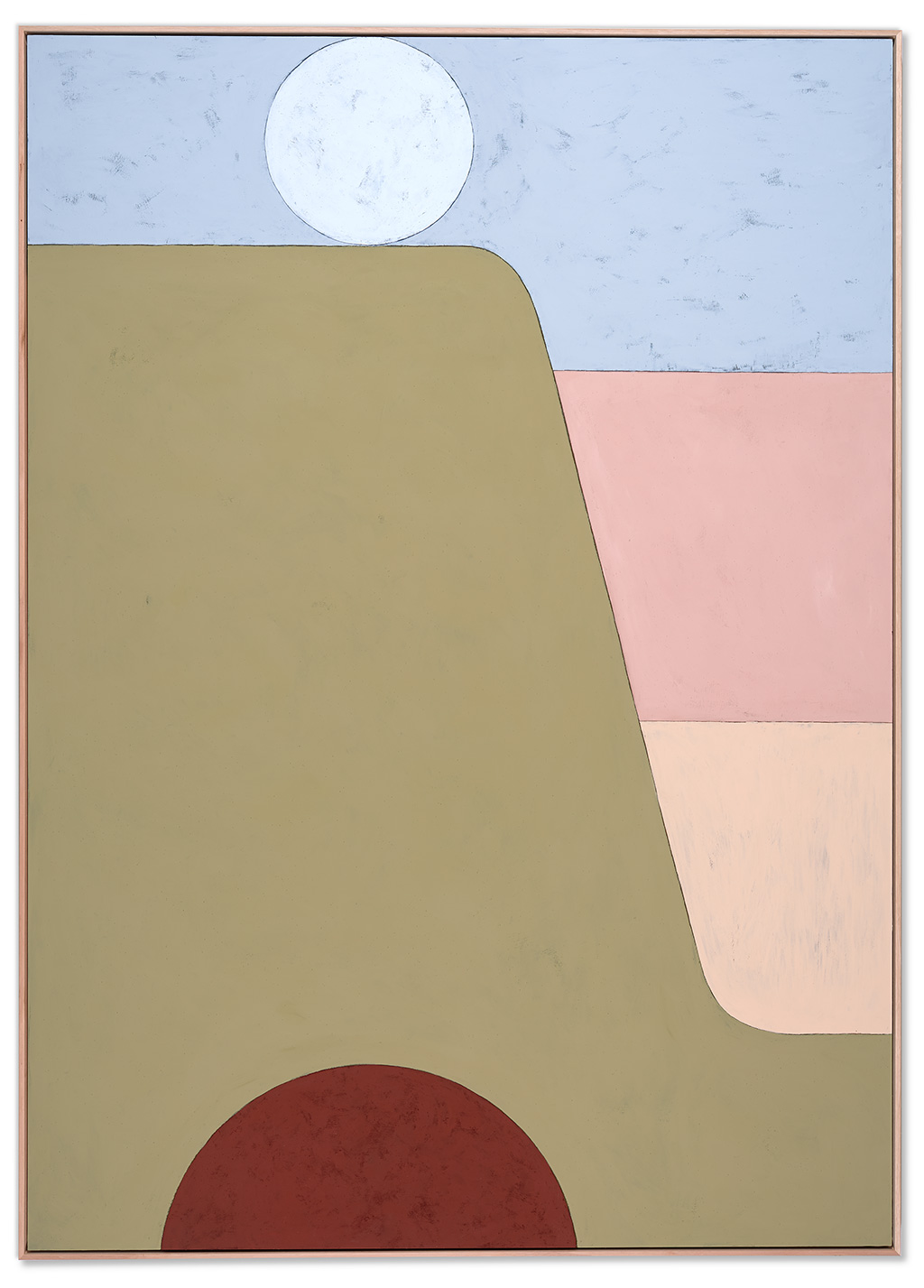 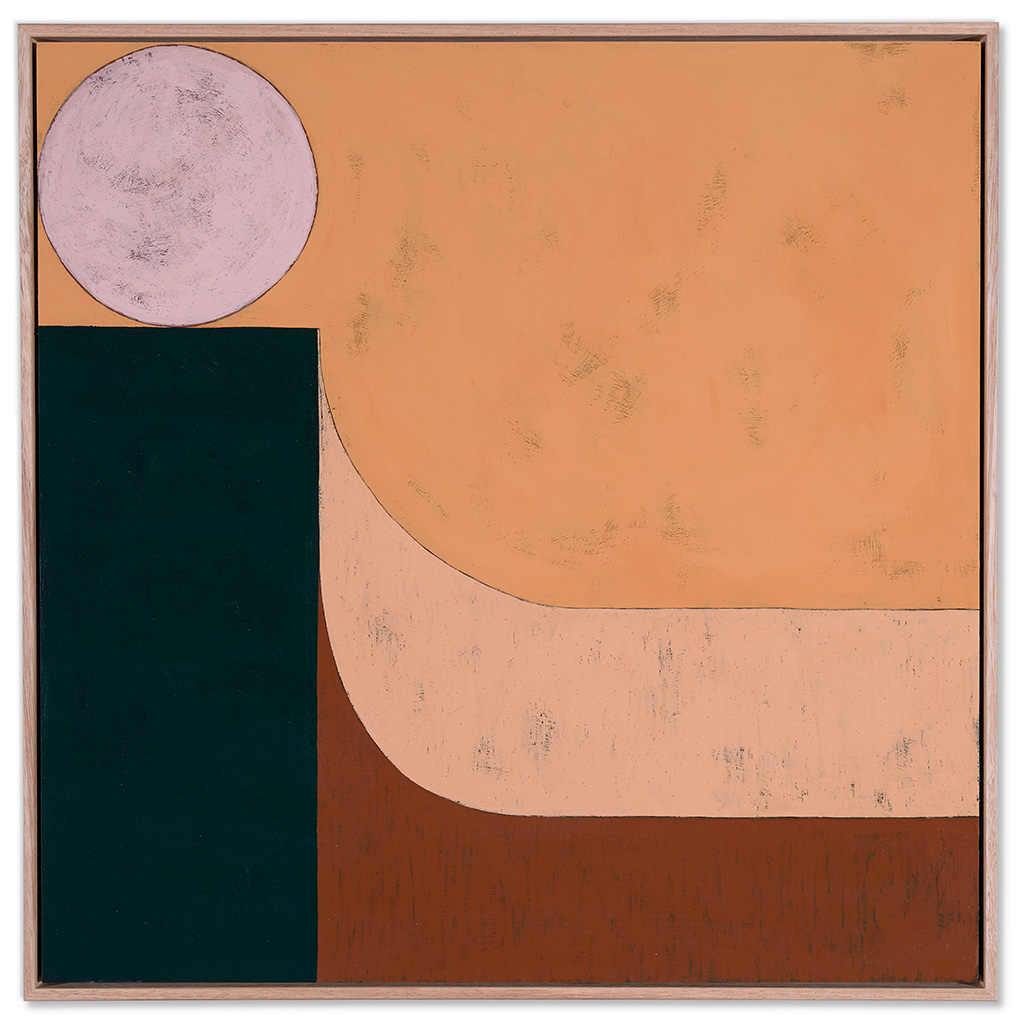 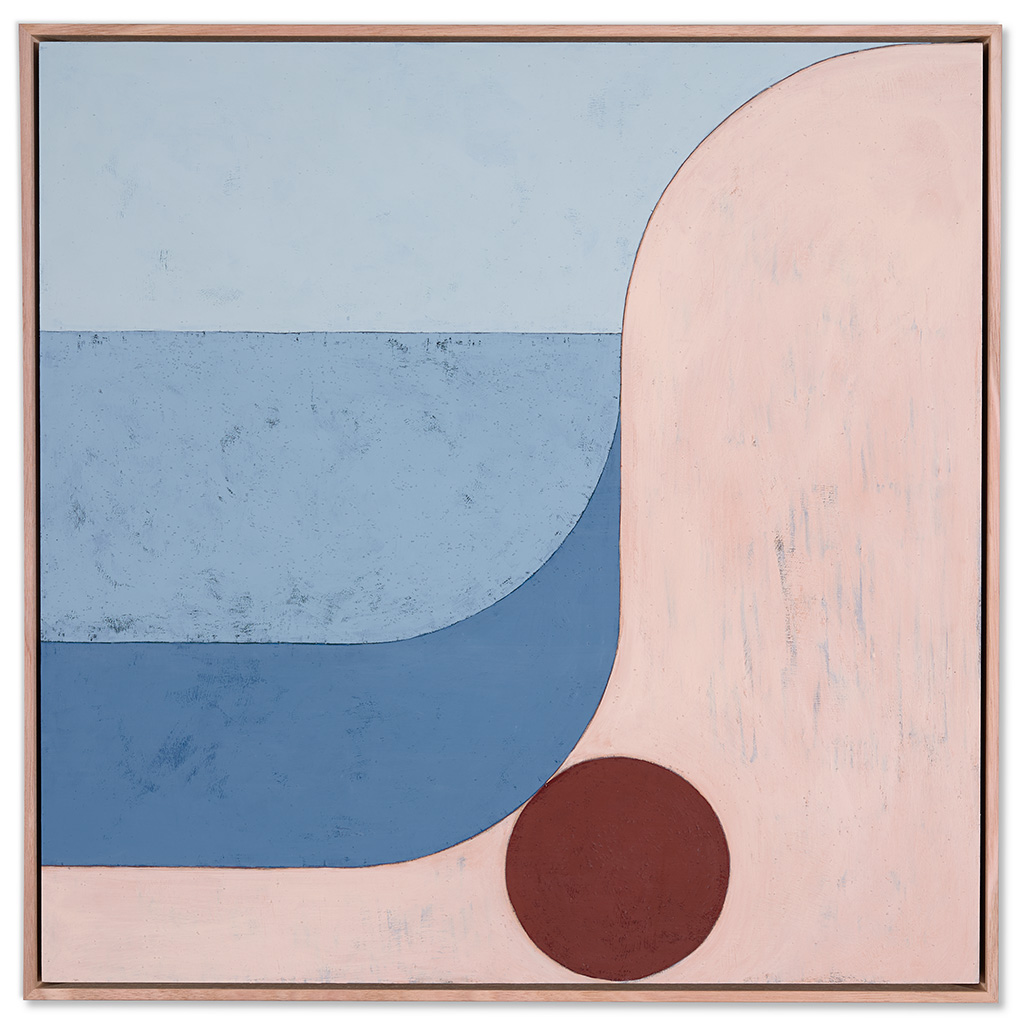 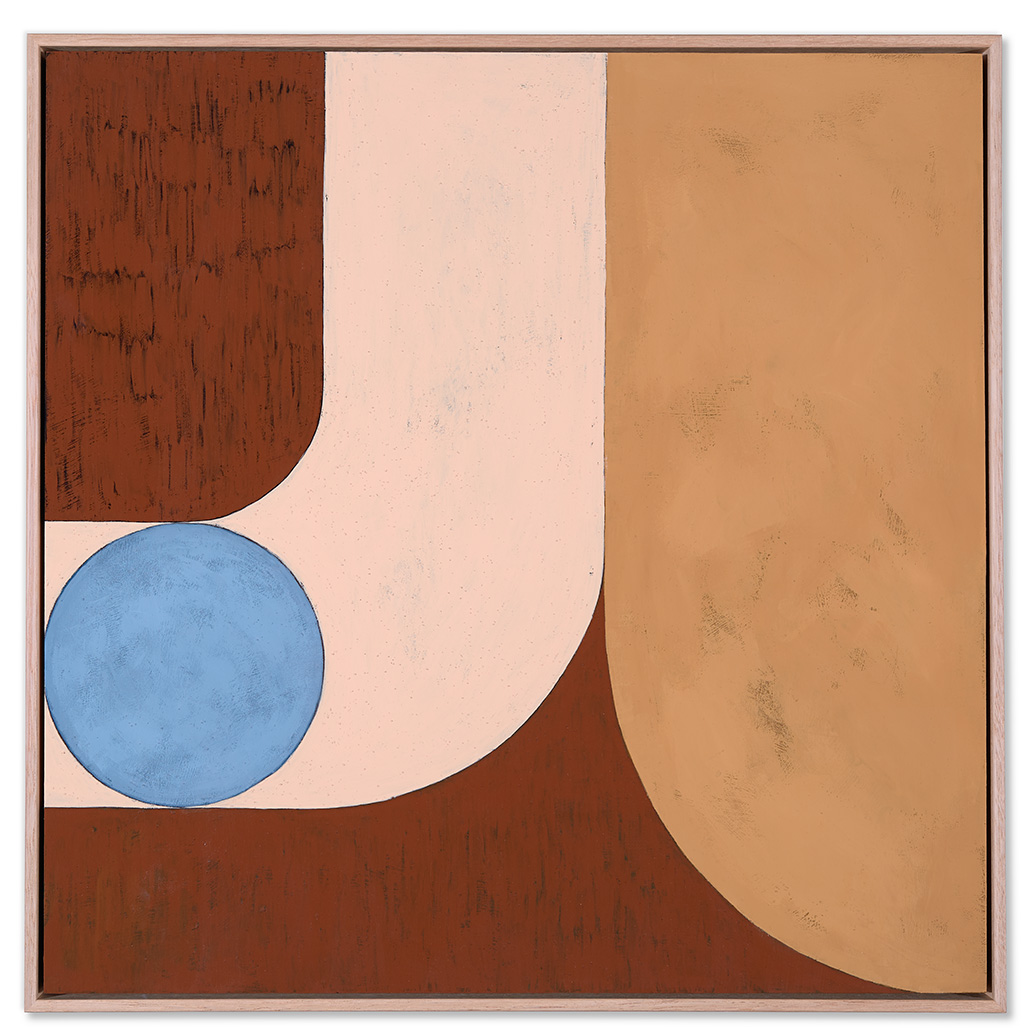 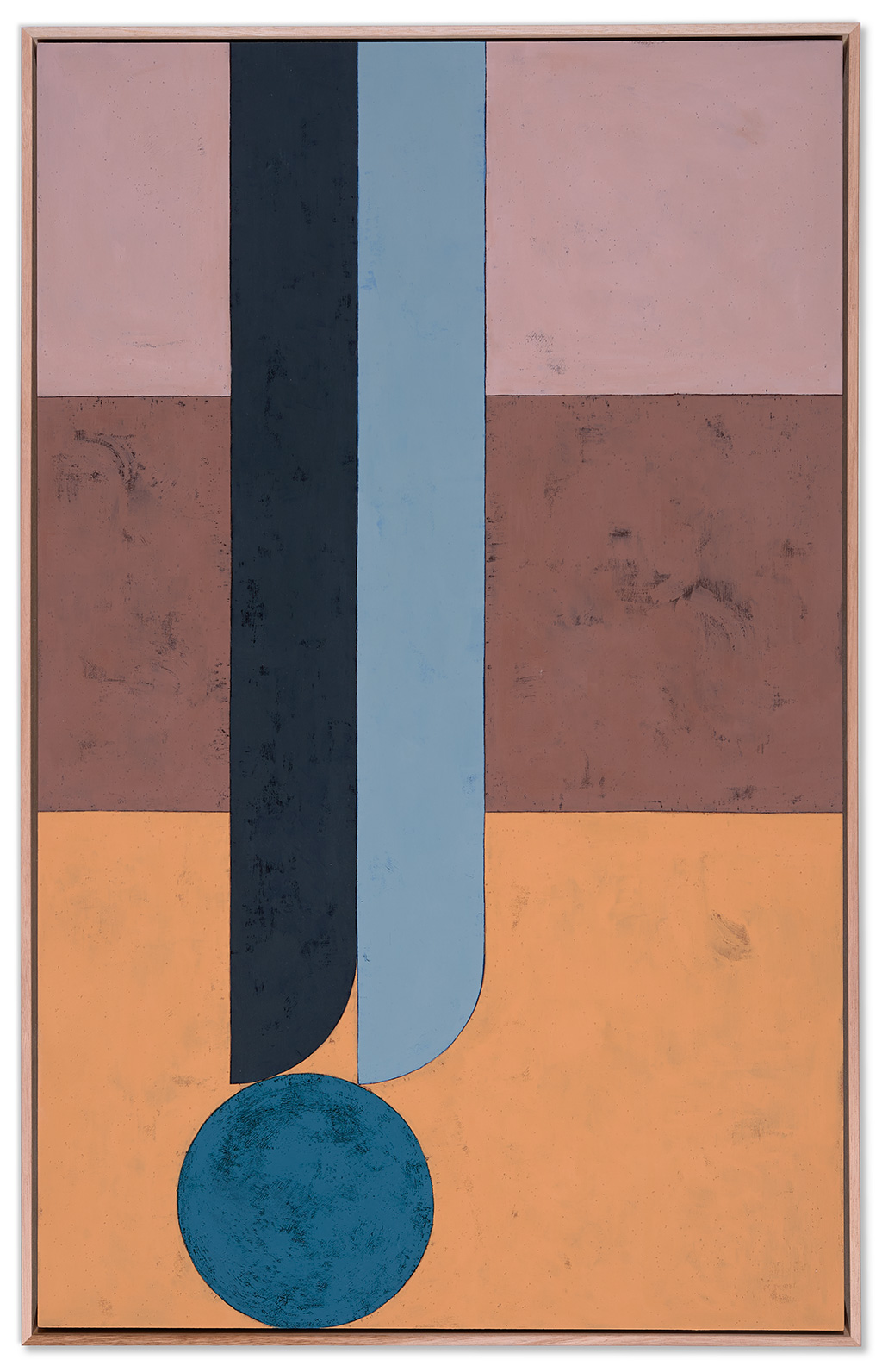 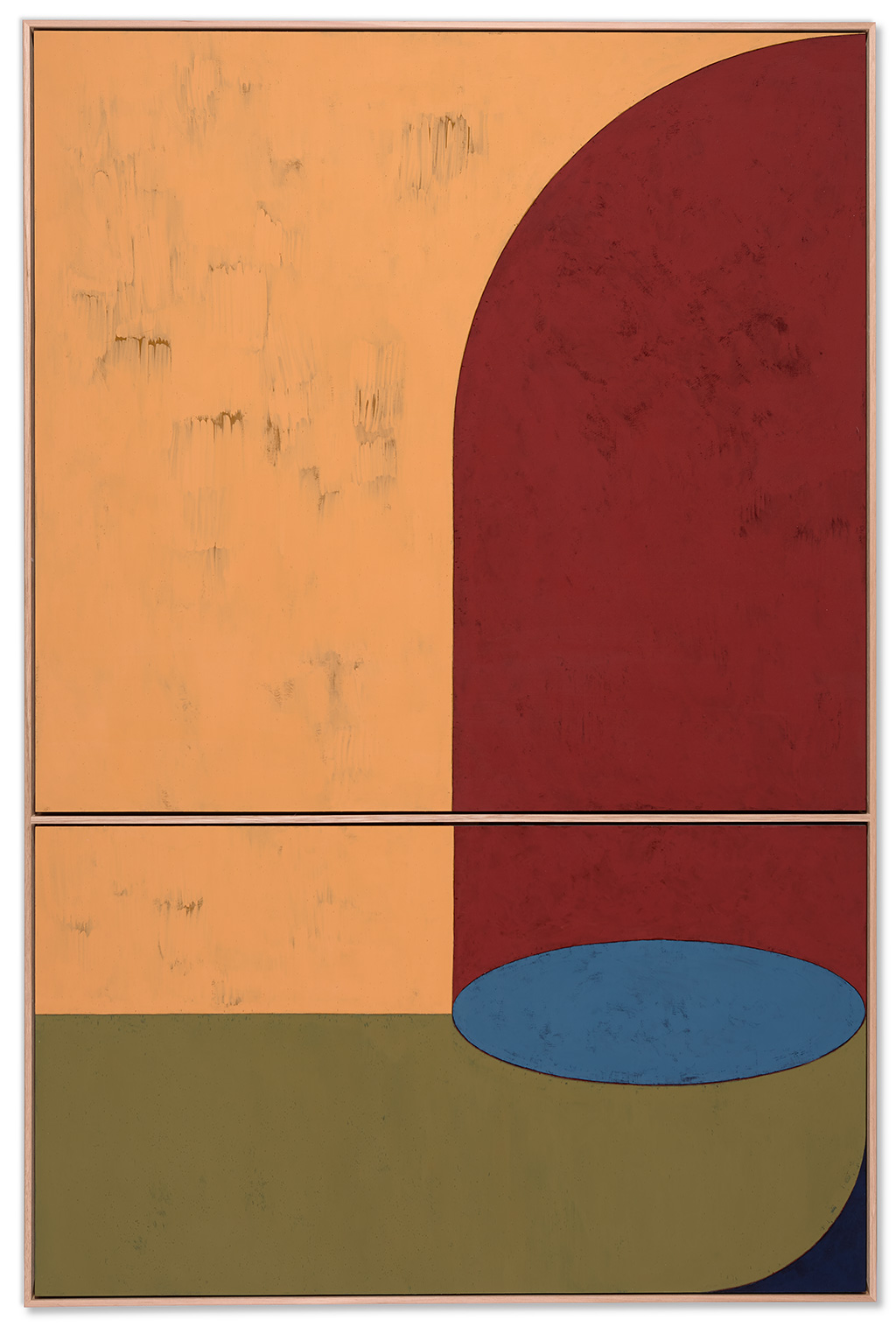 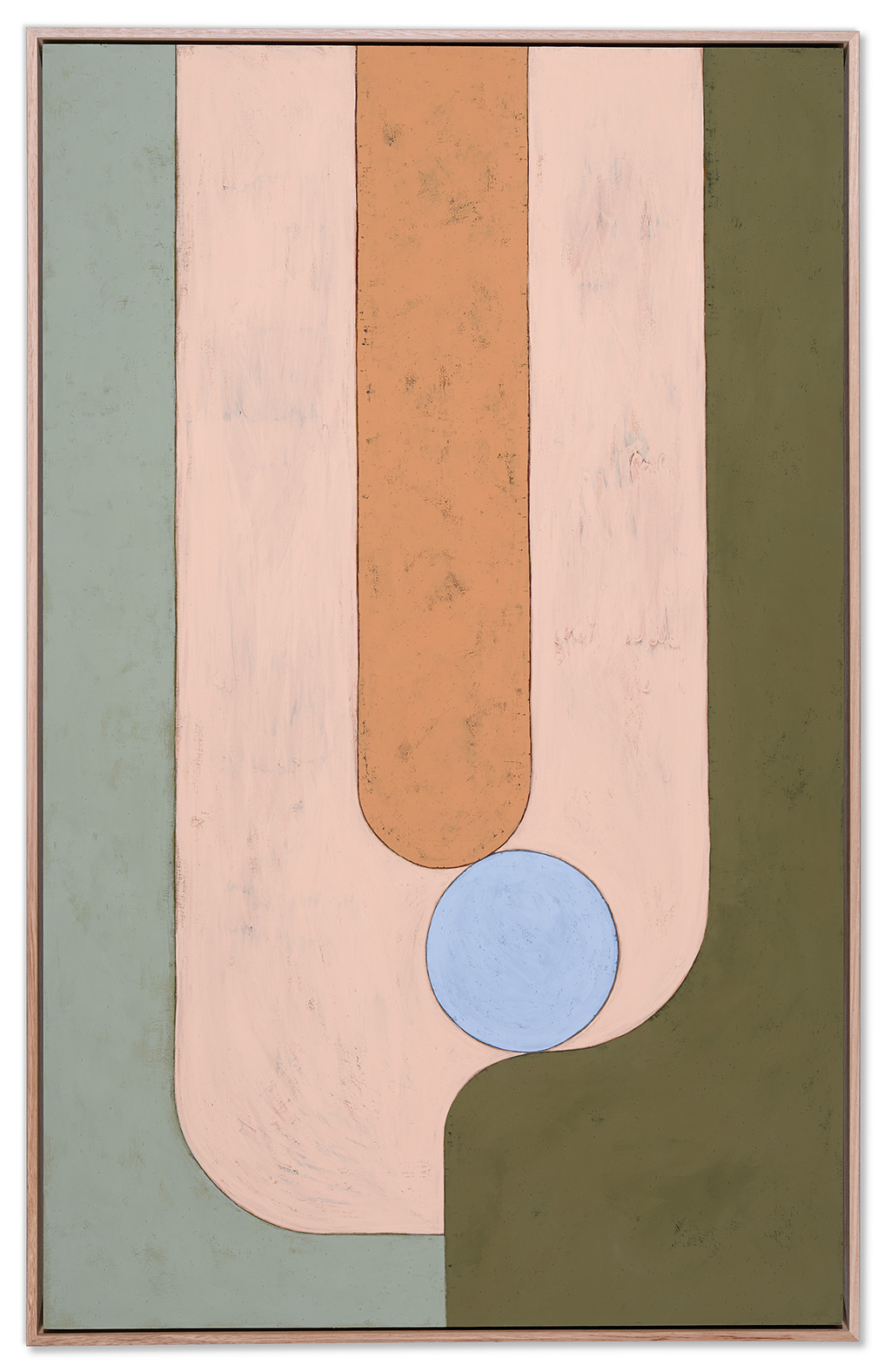 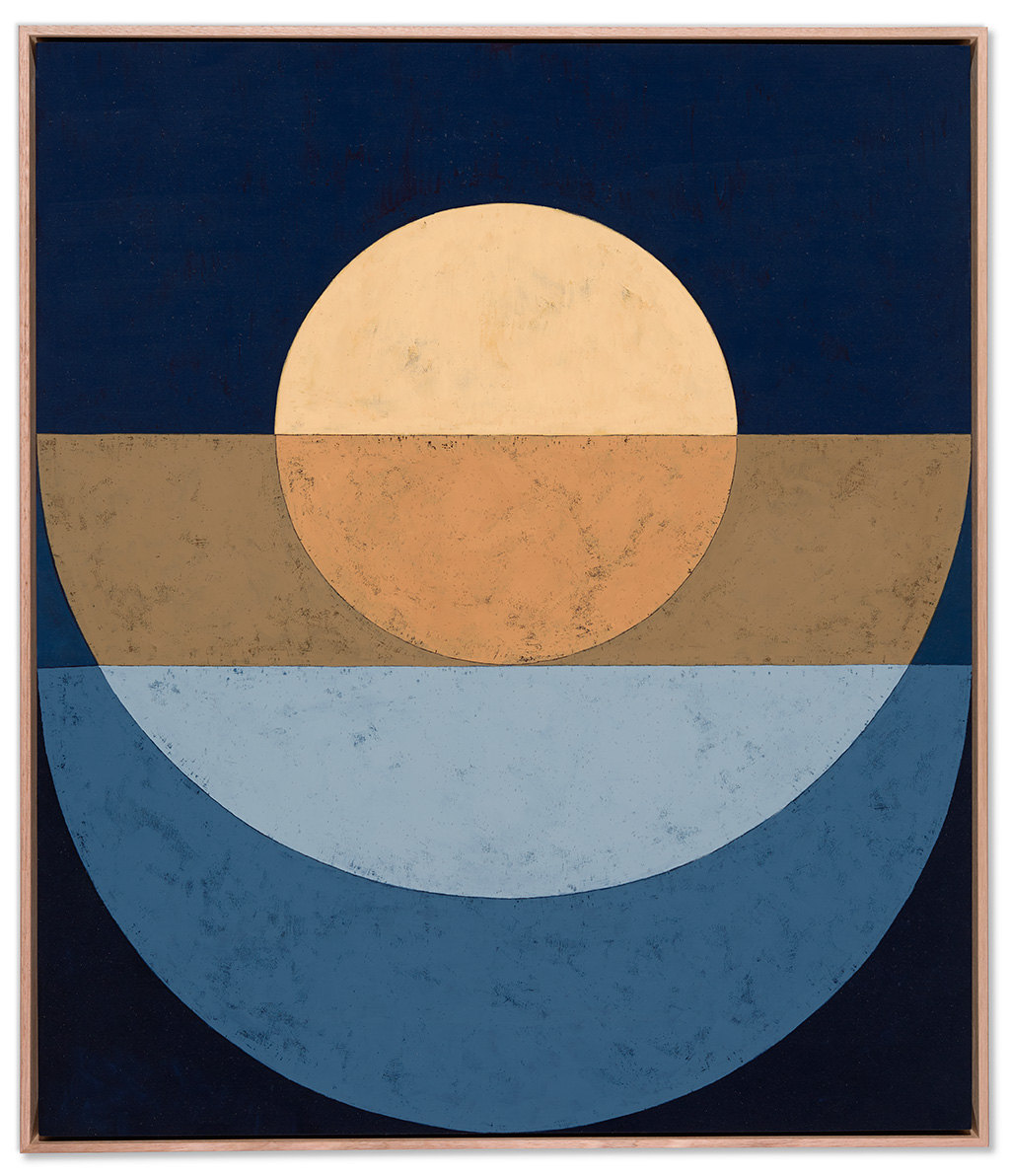 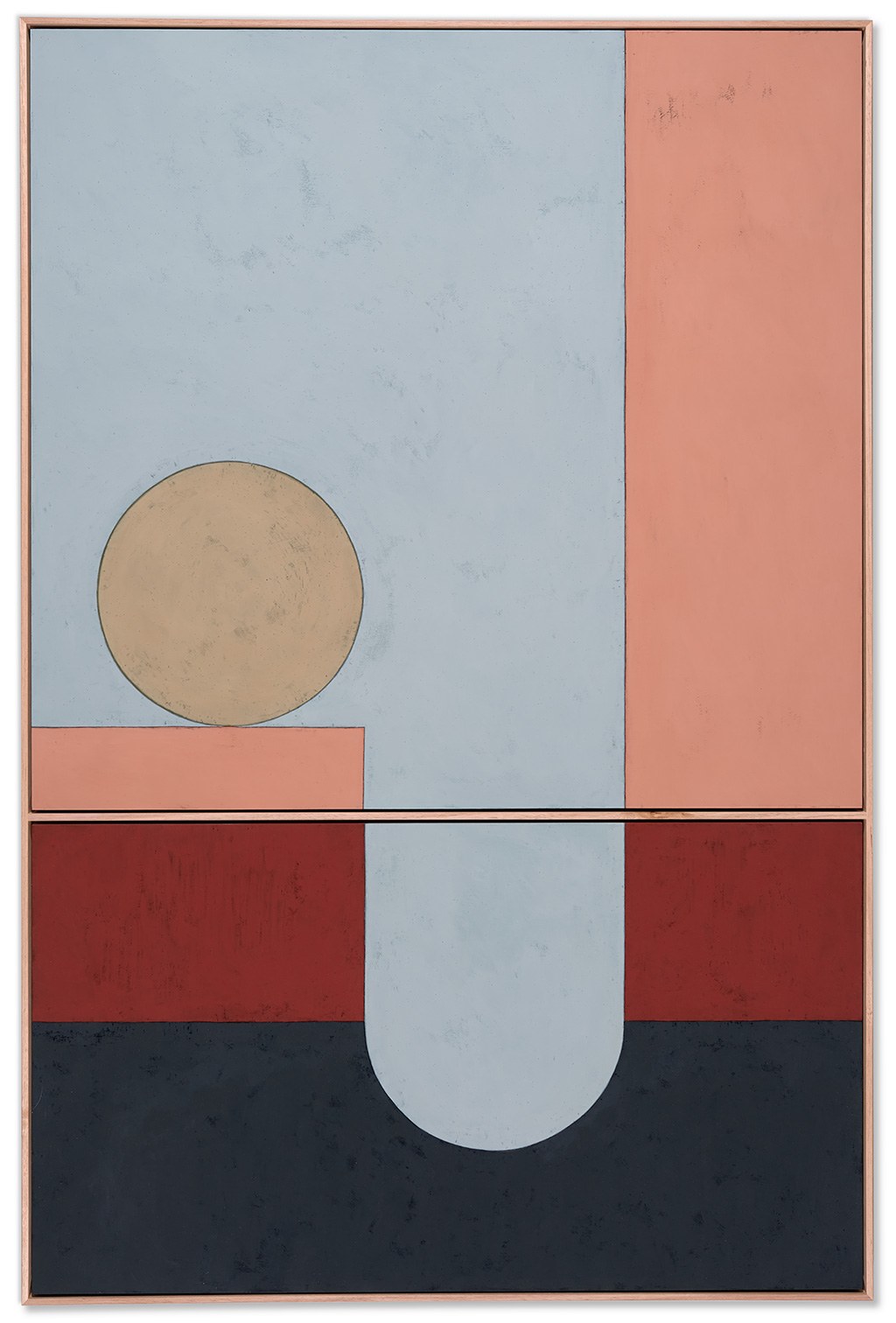 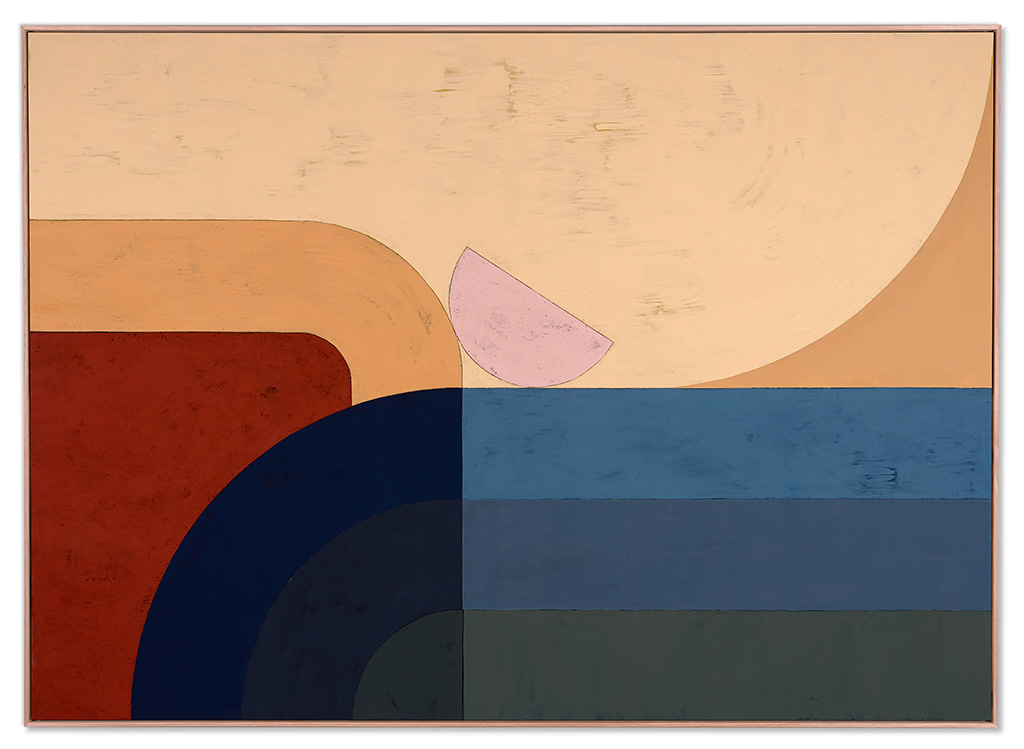 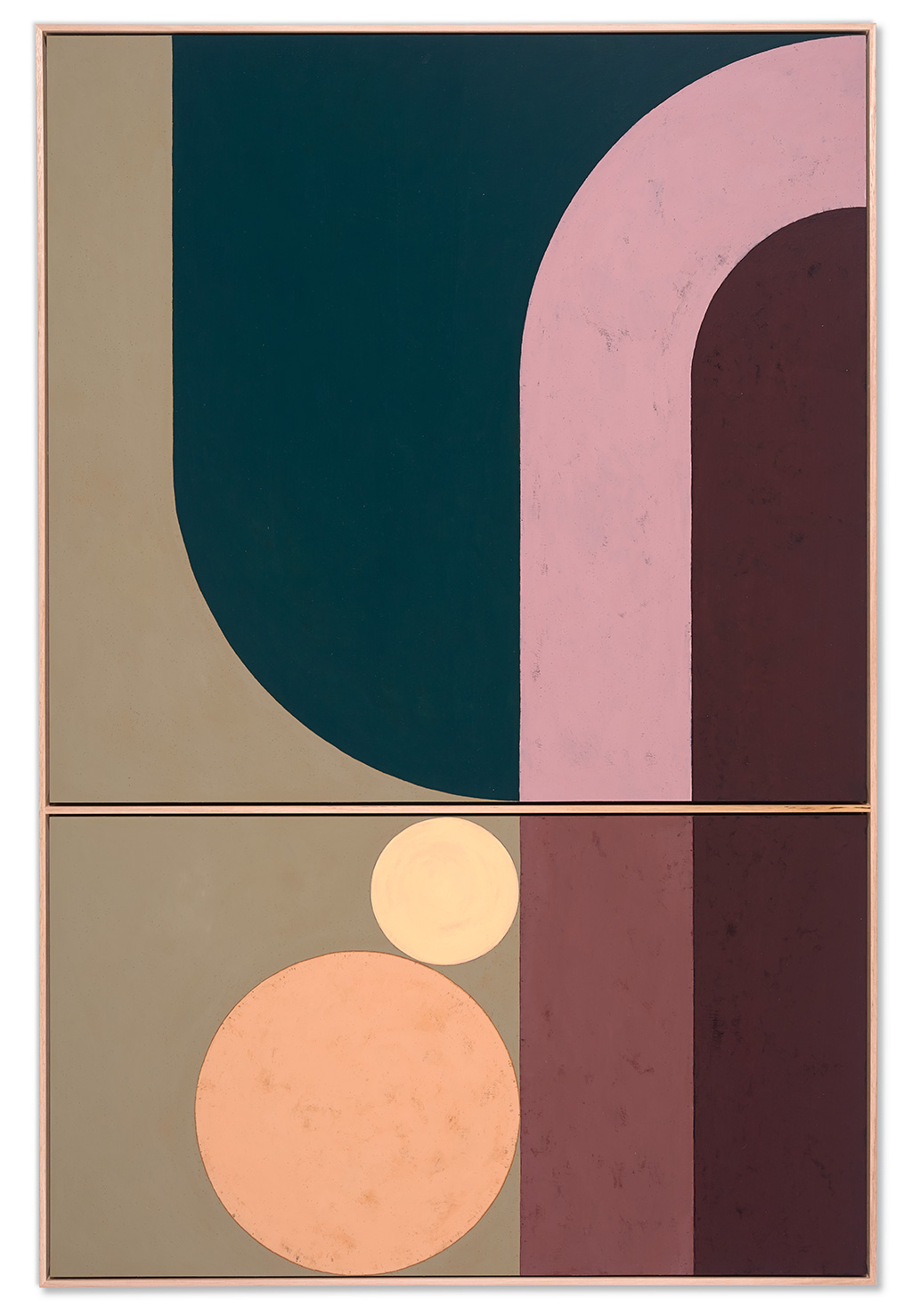 We are living in a time when we need to be more subversive than ever. The intent of Bec Smith’s exploration of subterranean notions is defined in this essay by writer, Amy Gray (chosen by the artist).

We are a species obsessed with distraction. In fact, so obsessed are we with distraction, our one point of focus is refusing to see the signs around us. Not those overt ones that tell us what to buy, who to be and where to go but the signs of how we are treated by others, what is happening around us and – if we’re lucky to listen closely – who we truly are already.

This is the sort of opening that can lead to overt pronouncements, like those found on late night news shows or opinion columns. Something telling you to embrace the old, which we’re told was so much better when we all know the old is just a slightly less engaging form of the same conformity.

The answer isn’t in being overt or reverting to the old. It lies in subverting the old and the new.

Subversion is a tricky business, as natural as it is unpredictable. When old systems begin to fail, a new growth appears, taking each small opportunity to grow and connect before overtaking the stagnated, depleted ground. All it needs are the right conditions from close observation and taking a chance at the right time.

In the 70s, women would gather and hold “consciousness raising” events in homes and halls. Women shared stories, realising how politics were present in their lives and dragging them down. The storyteller and the listeners felt echoes of connection, realising how outmoded politics and processes drained their resources, oppressing them.

Each story and realisation created new life inside the women, their personal growth flourishing with each collective tale and thought. That growth snaked its tendrils into the depleted fields and took root, digging into the ground. Each story was an opportunity for growth and before long the field was overrun with new, vibrant life.

Beneath the surface of our lives, societies and world lies an interior of potential. Beneath the layer of unquestioned and established rules exist new growth just waiting to subvert and come up from the earth to bask in the sun.

Our rebellion is as natural as it is inevitable.

Amy Gray is a Melbourne-based writer interested in feminism, popular and digital culture and parenting. Her work has appeared in the Age, Sydney Morning Herald, BBC, ABC and others. She is also an occasional broadcaster on ABC, Radio Adelaide and 2UE.