Peace and Disquiet brings together the dreamlike paintings of Guy Rubicon and the winsome yet slightly discordant ceramic sculptures of Georgia Harvey.

Melbourne’s Georgia Harvey is a ceramicist who creates outre and colourful animal-centered forms, each with a capricious and antediluvian character. For Belgian painter and tattoo artist, Guy Rubicon, this is his first exhibition anywhere outside of Europe. Guy’s paintings have an epic and allegorical energy to them, they feel like they are illustrating a mythical fable of a long, lost legend.

Another in a series of Pas De Deux curated by Kitty Clark, the work of these two artists is a fine balancing act full of the tensions between past and present, myth and reality. Peace and Disquiet strikes a chord in the unconscious, like memories from a different life or time, the creatures depicted and the worlds they inhabit might be from deep in the past, in an undefined present, or perhaps a post-human future. The artists, sharing a sense of unease about our own species’ destructive history, seek to recapture something of a paradise lost. The objects and totemic images they create might serve, in the manner of ancient ritual artefacts, as a focus for reflection, or as conduits between the tangible world and the unknown.

An evident simpatico connects the artists stylistically, and the echoing interplay of their images and forms creates a tableau of a strange wild place, simmering with primal anxieties and yet speaking to the joys of quiet coexistence with the natural world. 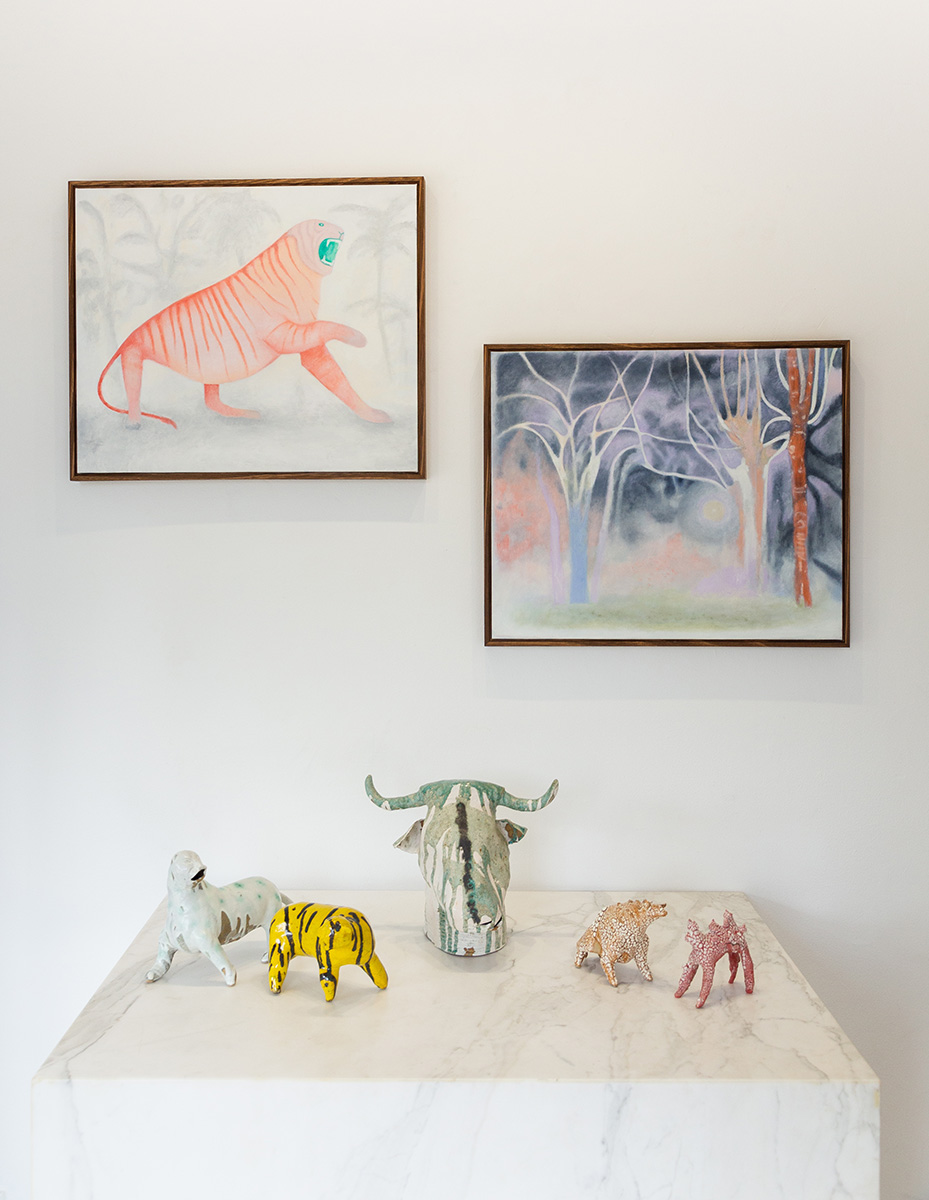 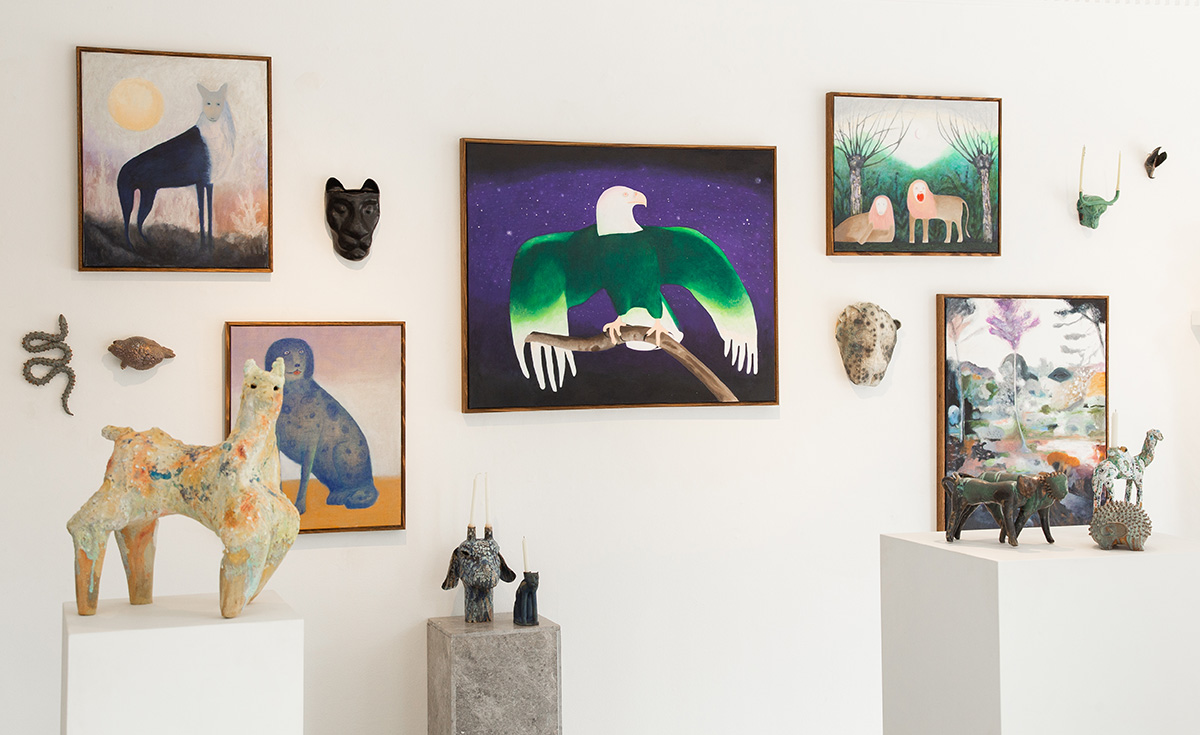 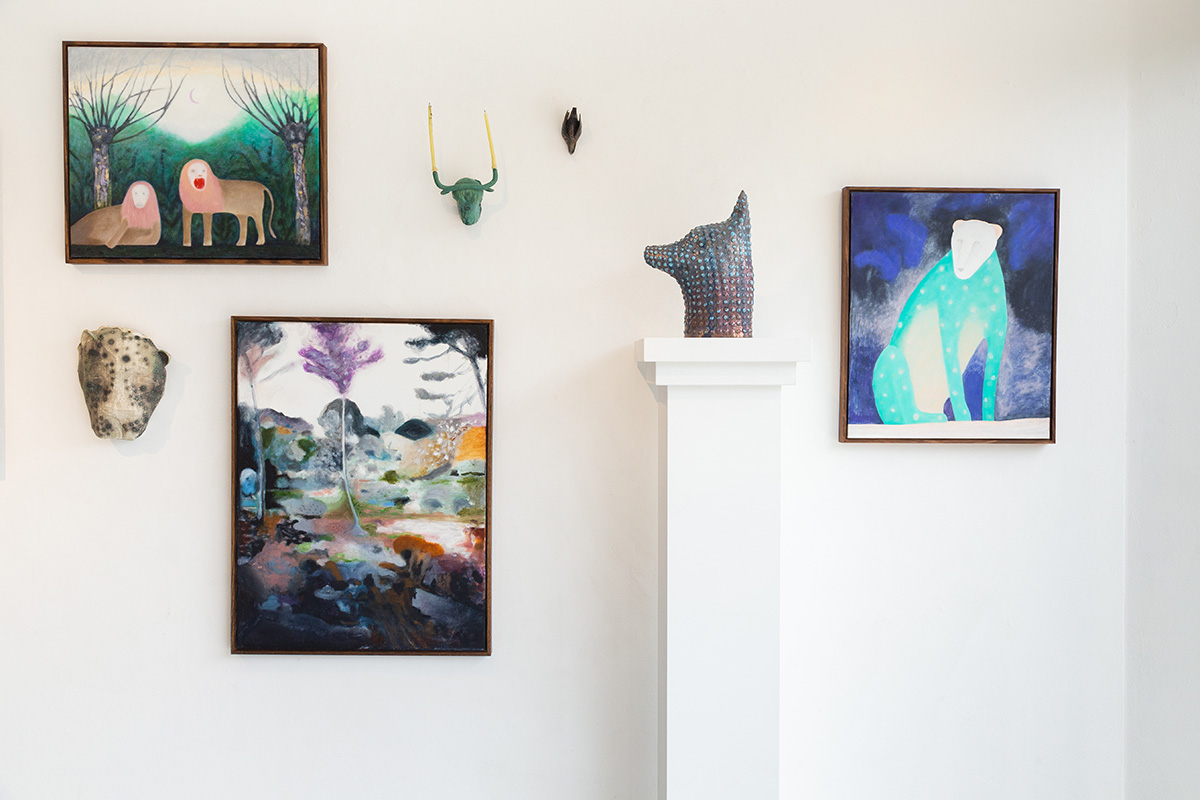 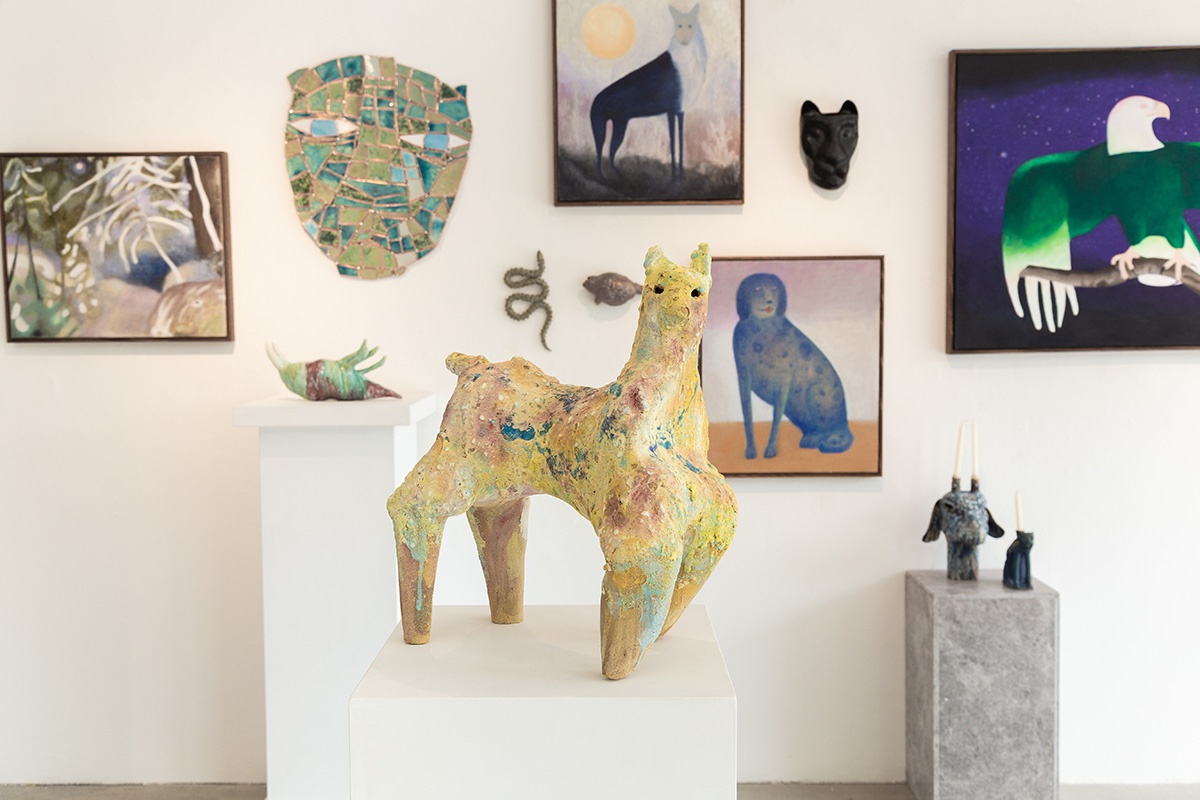 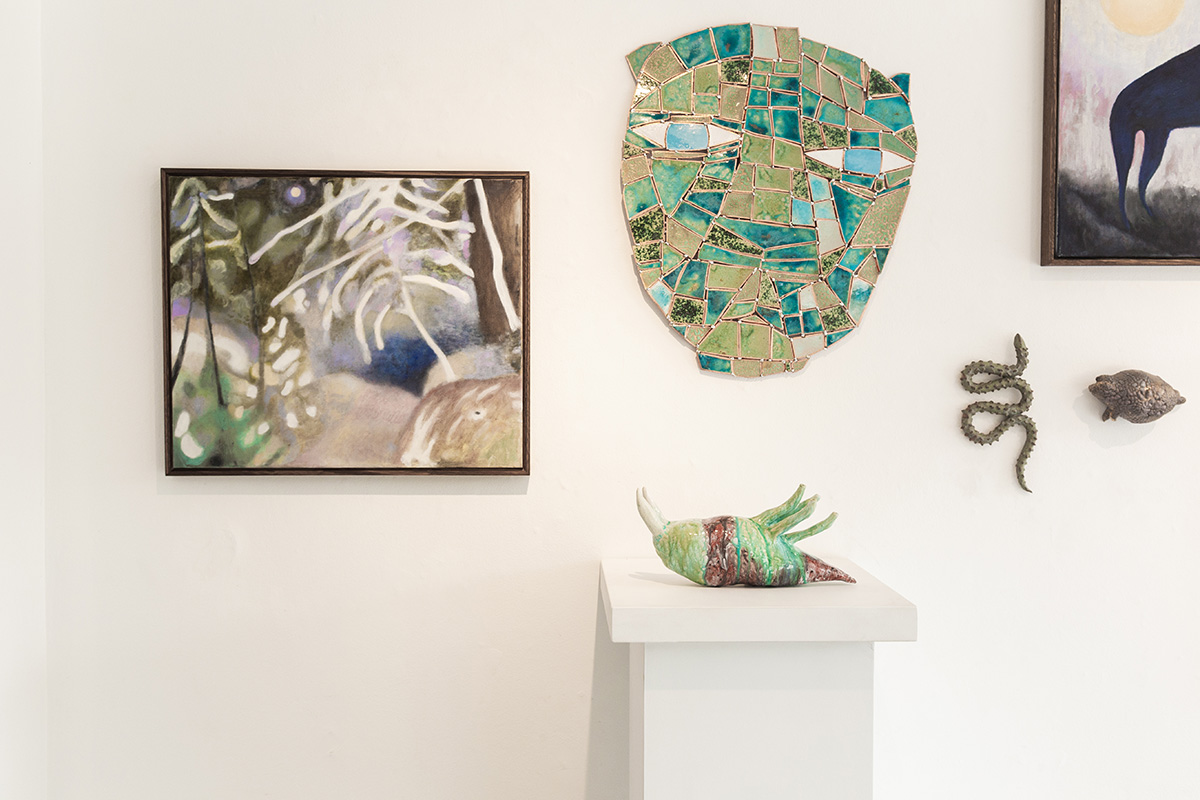 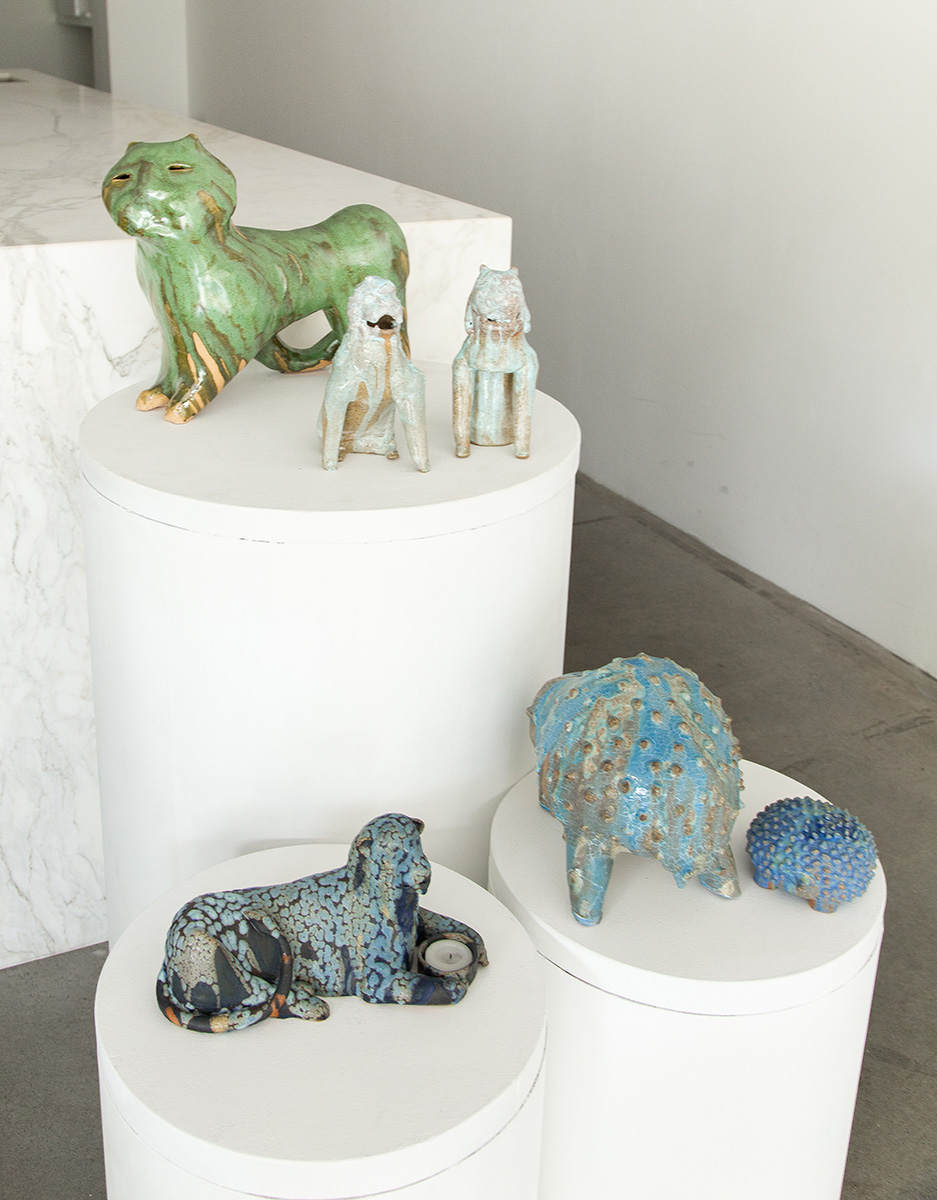 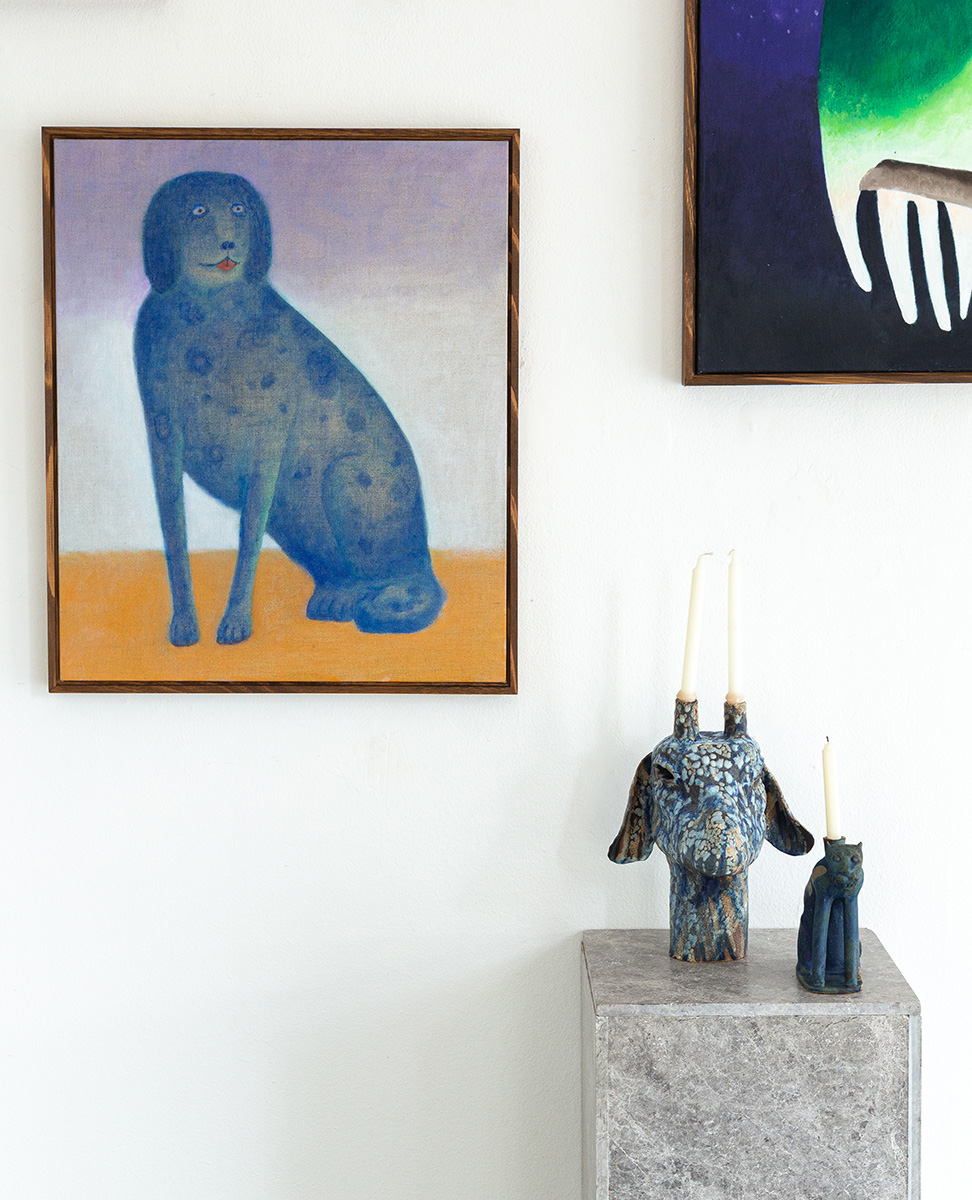 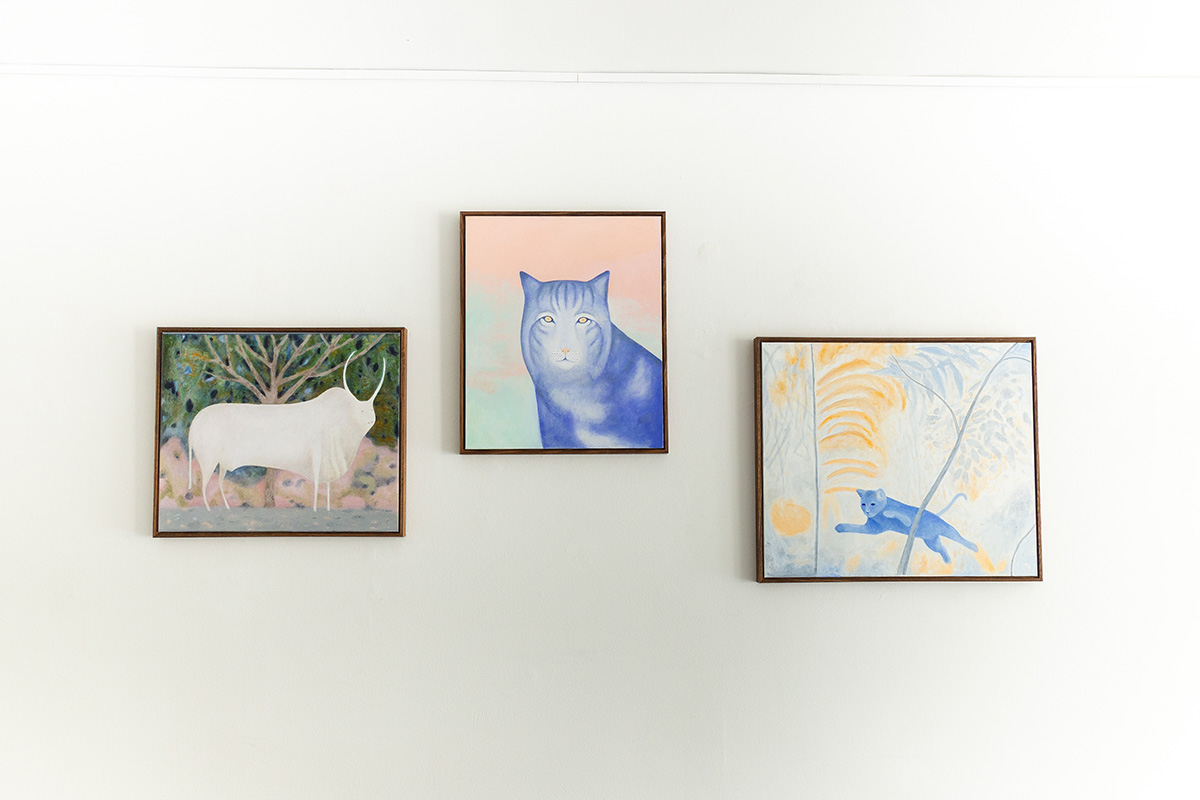 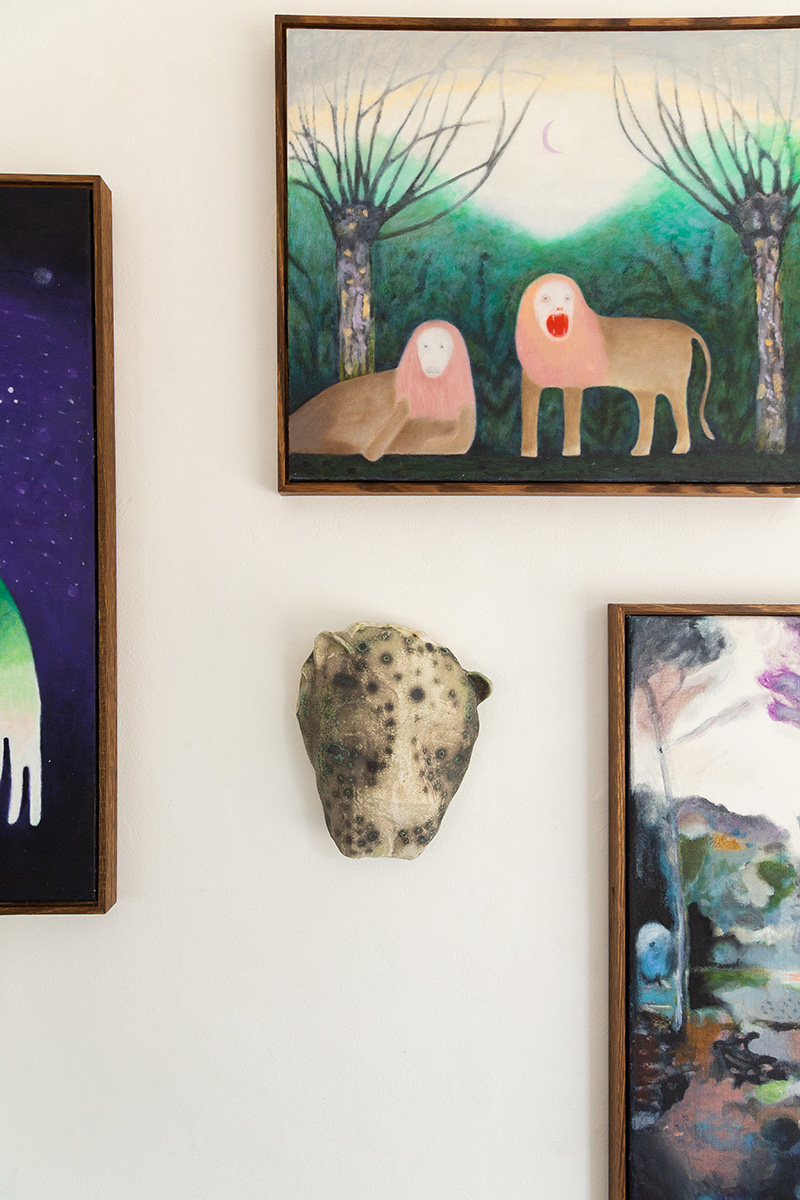 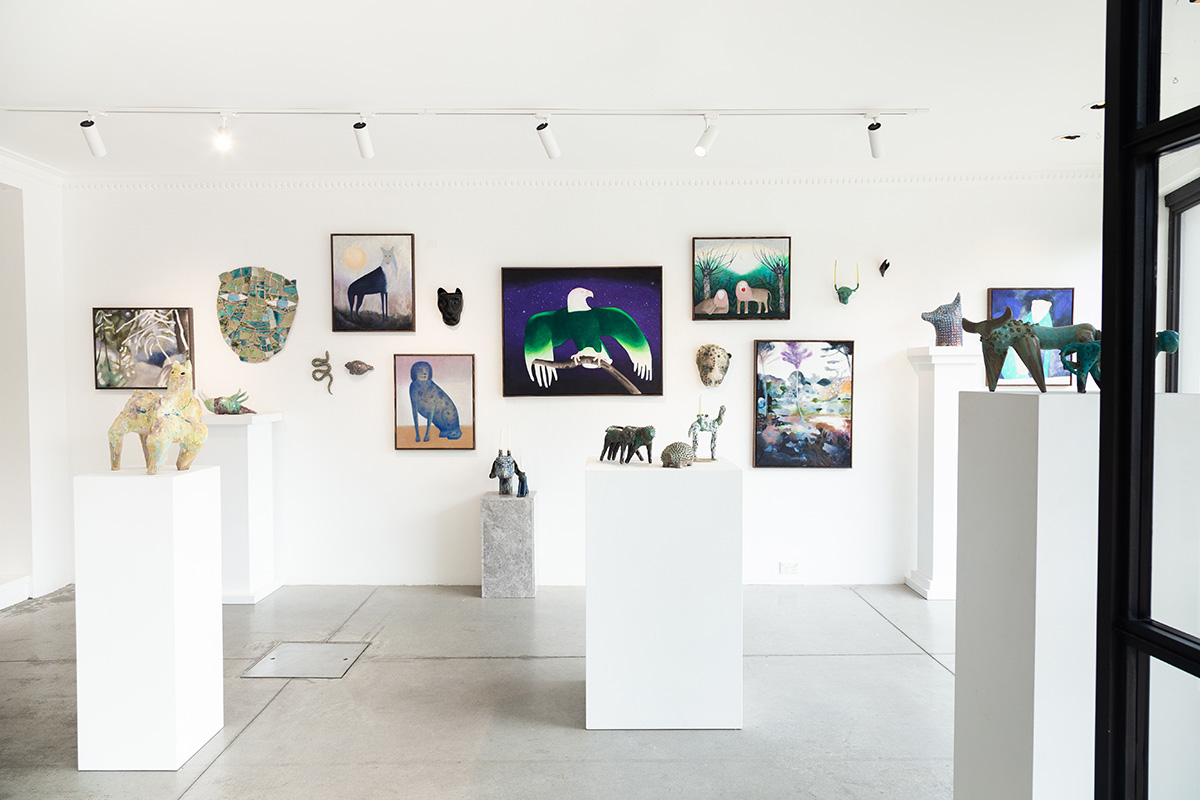 Georgia Harvey is a Melbourne/Naarm-based ceramicist who hand builds small sculptural forms clothed in a variety of textural surfaces. Originally studying painting at RMIT, she went on to become an objects conservator before finding her way to a sculptural practice, heavily inspired by artefacts encountered in her conservation work. She draws on experiences from several years spent living in the desert environment of the United Arab Emirates, and uses materials sourced from walks up mountains, in wadis, or from around the block. Her glazing is based in play and experimentation, and she captures all her studio waste for reformulation into new, unexpected (and often un-reproducible) bodies and surfaces. 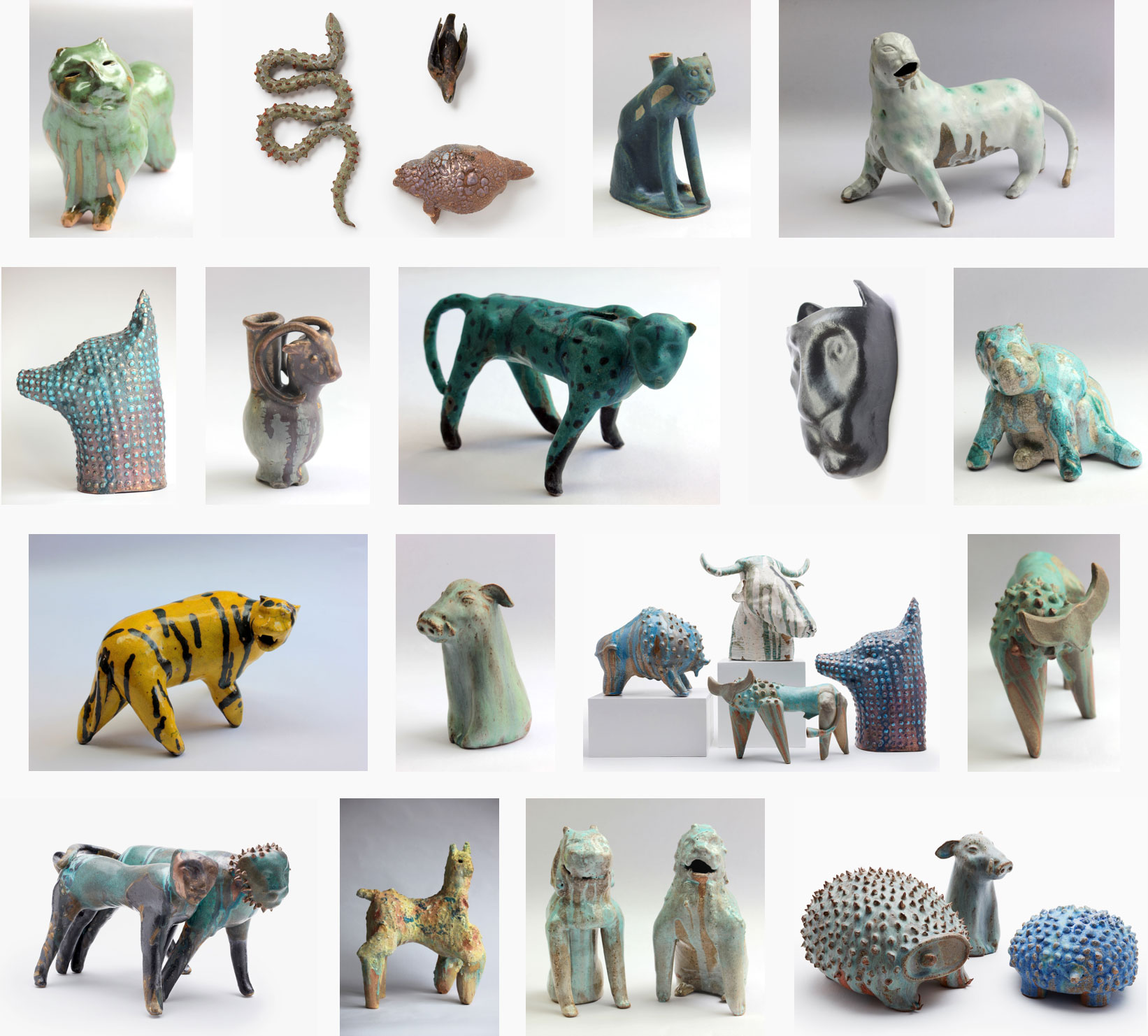 “I frequently turn to animal-based forms in my work. Not only is there the appeal of bringing a lump of clay to life with the simplest of faces, the merest indication of haunch or paunch or animal-ish stance; I am also very much drawn to the small-scale icons of creatures that were produced and used ritually throughout antiquity as a means of manifesting something of the animals’ archetypal powers. However, in my representations, there is always something amiss. In some cases, it is merely that the anatomy is a bit awkward, or the glaze doesn’t quite fit the body. In others, the creatures have become hybridised or distorted beyond any recognisable species. These distortions and ambiguities are not predetermined, it is an organic process, and of course not necessarily viewed in the same way by different people. But it is the energy in the space between familiarity and unexpectedness that I feel brings an object to life.

My work for Peace and disquiet responds to the unsettling paintings of Guy Rubicon but in fact, upon first seeing his work I felt it was almost as if the slightly askew animals I have been making for years had sprung readymade from the worlds that Guy depicts. They are an eclectic congress of fragments, a collection of strange and varied species akin to the way a medieval bestiary collated (and invented) creatures from around the world. And while clearly inspired by treasures and practices of the past, my creatures, with their irregular anatomies and ambiguous expressions, subvert the notion of a conventional ideal.” 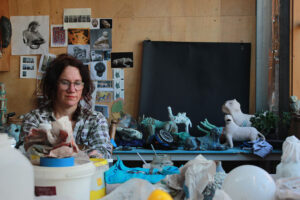 Guy Rubicon is a Belgium based painter and tattoo artist. He graduated as a photographer but was also drawing a lot since childhood. Tattooing became a way of being creative and still being able to make a living. After a few years of professional tattooing, he started experimenting with different media like watercolours and oil paint. When covid struck and tattoo businesses had to close, he started concentrating more on painting and developing his own vocabulary and style, taking influences from art history, popular media, and the natural world. 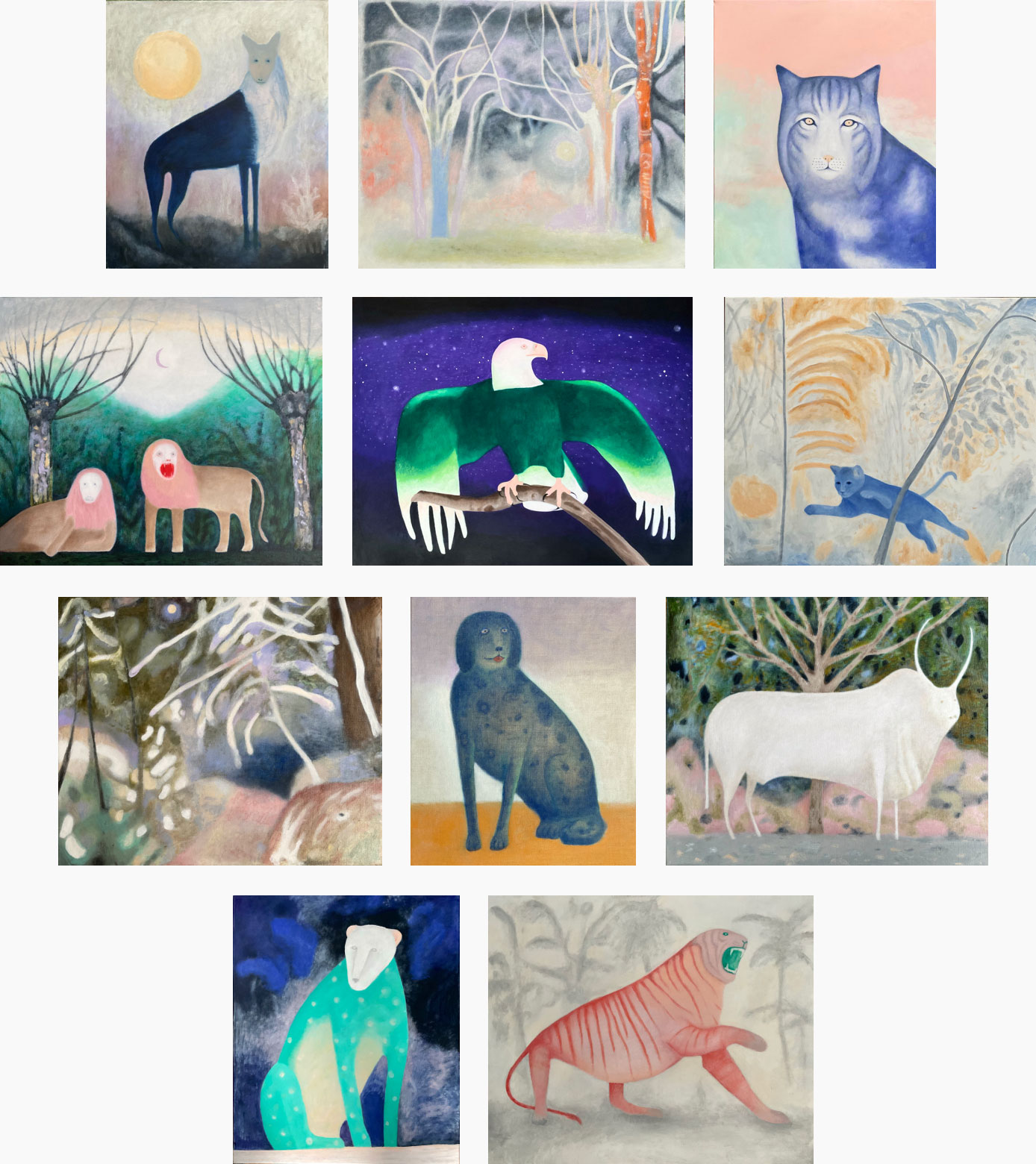 “Man is part of the natural world but is also the only creation of nature that puts itself outside of it, looking at nature from a distance. This distance between mankind and the natural world did not always exist. For thousands of years we lived in balance with the natural world, not understanding it, but respecting it, and because we did not understand nature, it became a place of magic, mythology and wonder but also fear, chaos and confusion.

Since the rise of monotheistic religions, the natural world is no longer a place of mythology, but something mankind wants to rule over and exploit, resulting in the destruction of balance in nature.
Maybe the only way to restore this balance is to make the natural world a place of myths and wonder again. The creatures, figures and landscapes in my paintings try to connect to these mythological and spiritual worlds we have known for thousands of years but have forgotten about, they seem not of our time, bearing the traces of our world, but they are not of our world.

Like Carl Gustav Jung said: “Nature is not matter only, she is also spirit.” 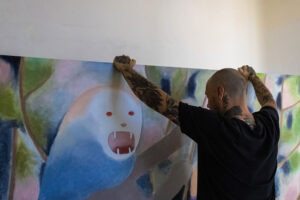