Following on from her sold out body of works in ‘Jet Set’ group show (Saint Cloche, Dec 2017), Eliza Gosse’s new show ‘MISSION BROWN’ is inspired by the project homes of the 50s, 60s and 70s across Australia and the U.S. The era embodied an evolving cultural identity for both countries as their shores opened to the post war European migrants.

The housing crisis of the post war period combined with the excitement towards the new architectural styles arriving from Europe created an environment in which Australia and North America’s best architects turned their attention towards domestic architecture.

In the U.S the Case Study program aimed at bringing modernist principles to the masses. Architects such as Richard Neutra, Pierre Koenig and Craig Ellwood designed and built inexpensive model homes that could be replicated throughout the suburbs to assist the residential housing boom.

Whilst in Australia Robin Boyd began The Small Homes Service that published designs for small houses weekly in The Age, the designs available for purchase for five pounds. Companies like Lend Lease and Pettit & Sevitt were formed where display villages exhibited the latest modernist designs to be sold ‘off the rack.’

“By looking backwards and painting these homes across the two countries I want to undo the impersonal, unflattering suburban stereotype of today and cast our minds back to a generation of young architects and European migrants that breathed a spirit of invention into the suburbs.” 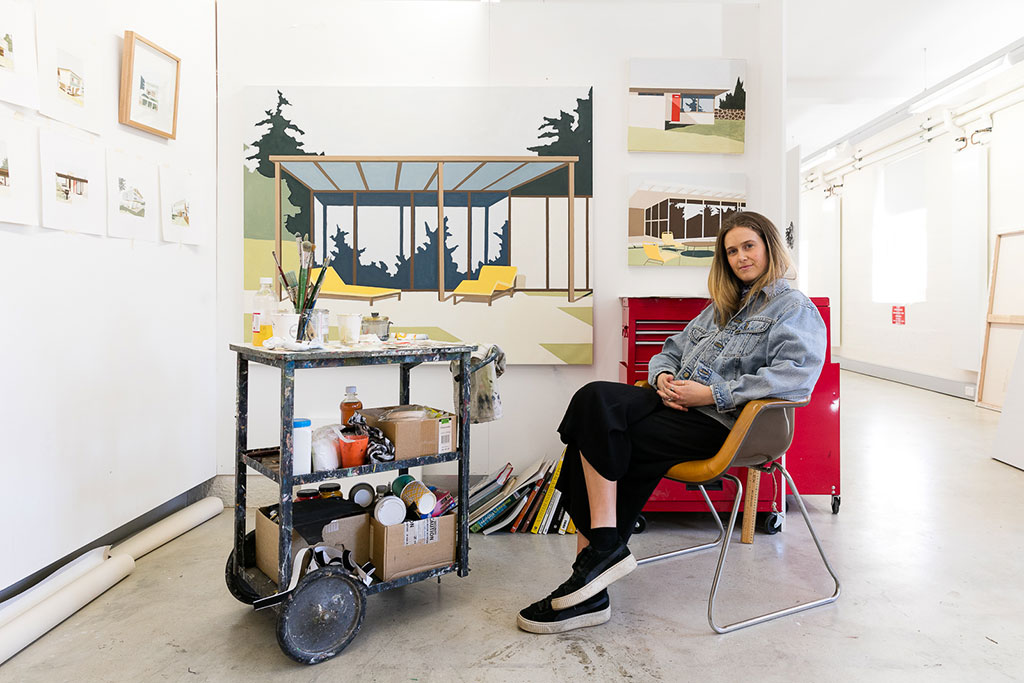 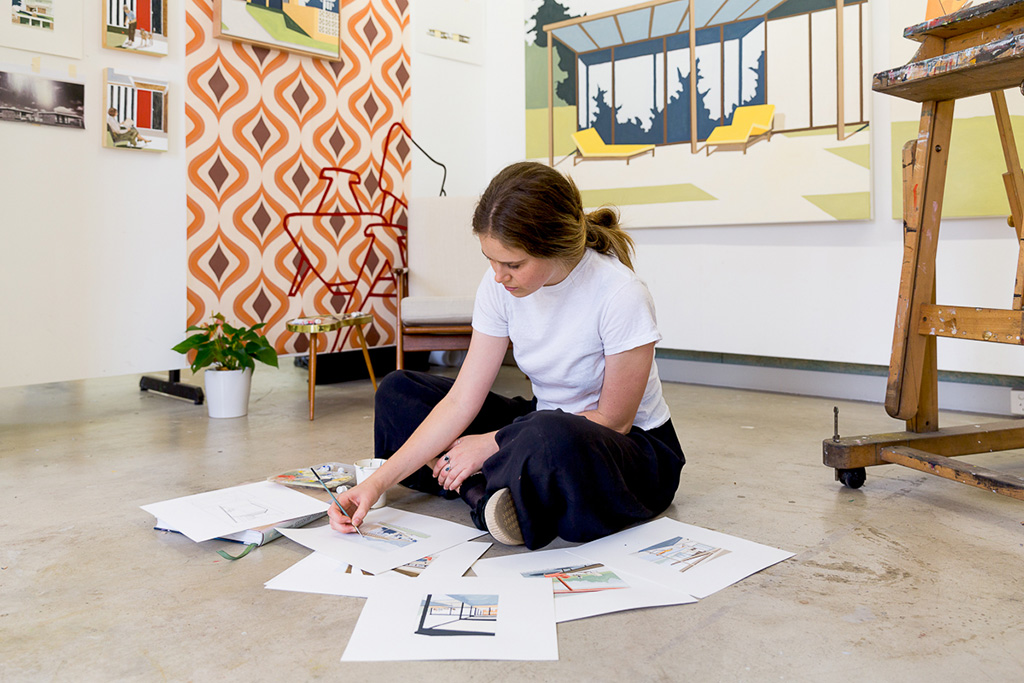 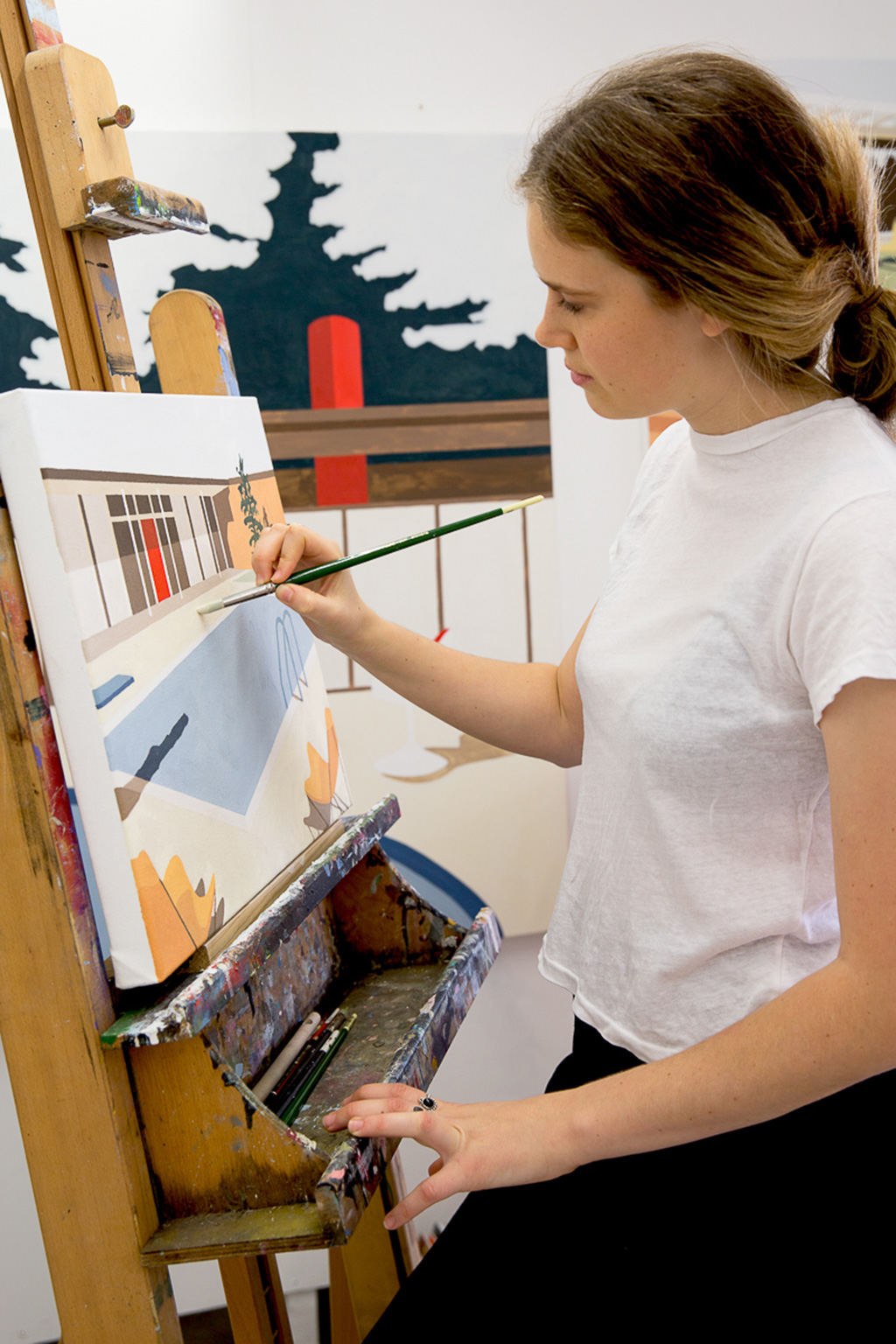 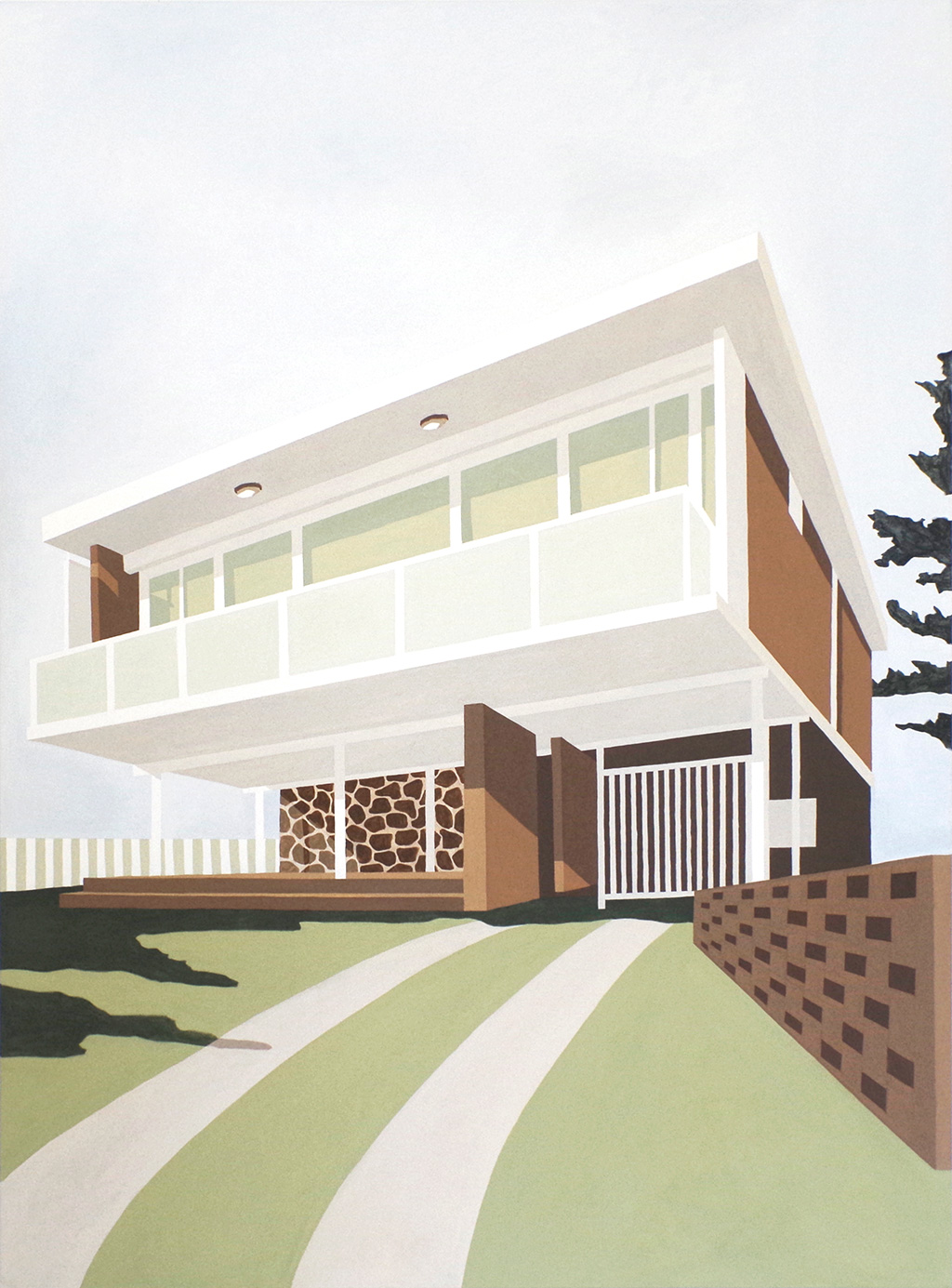 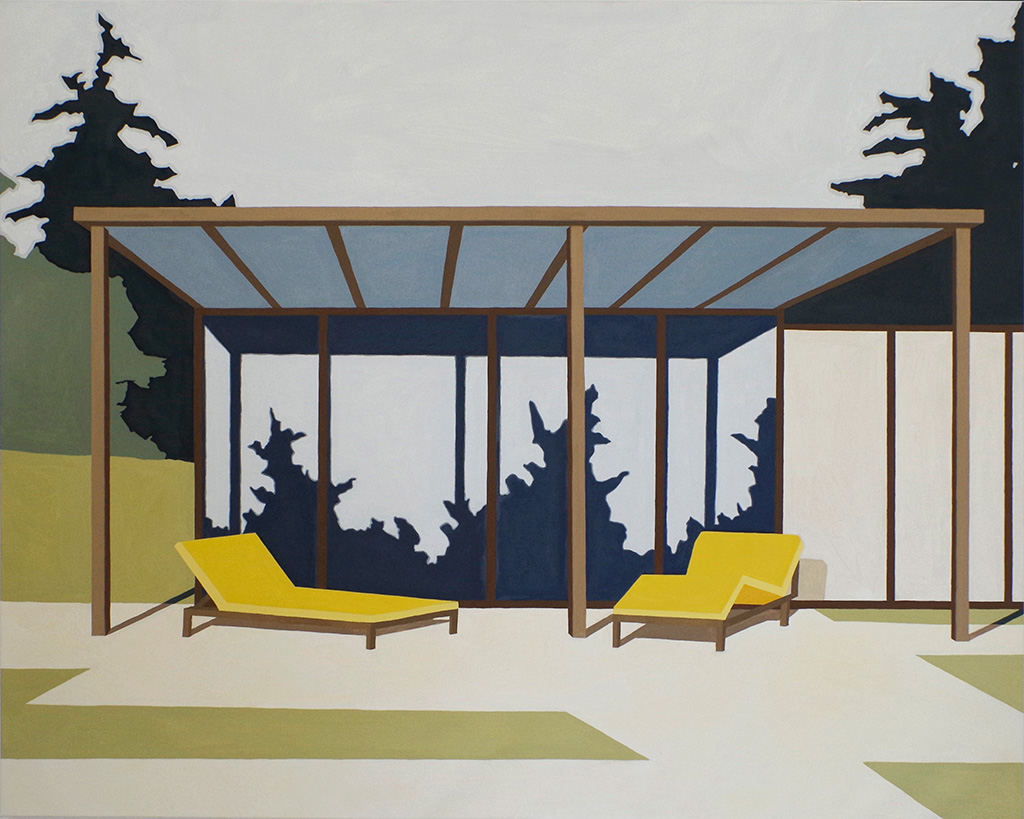 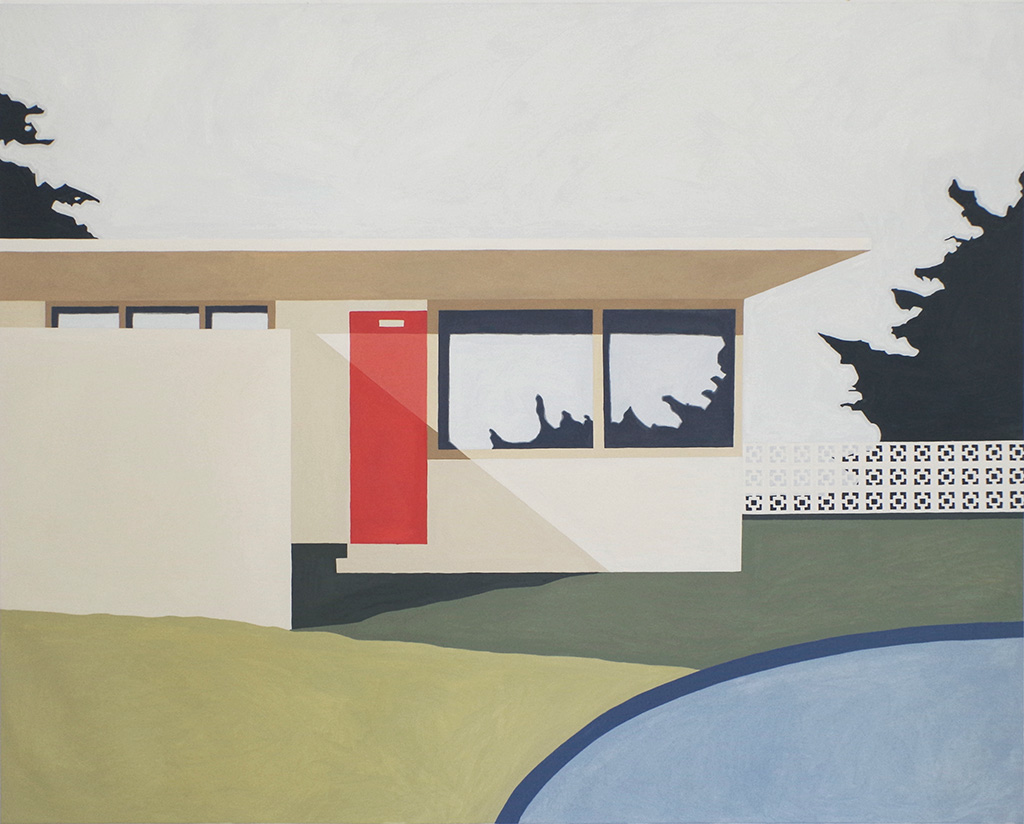 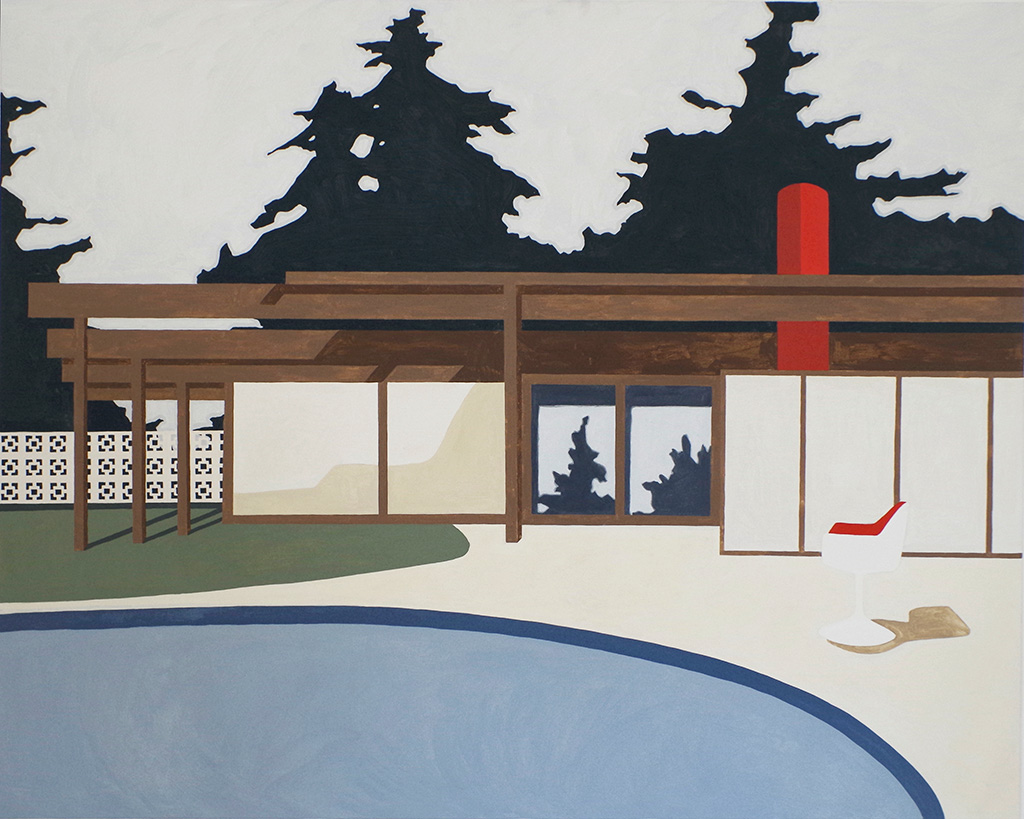 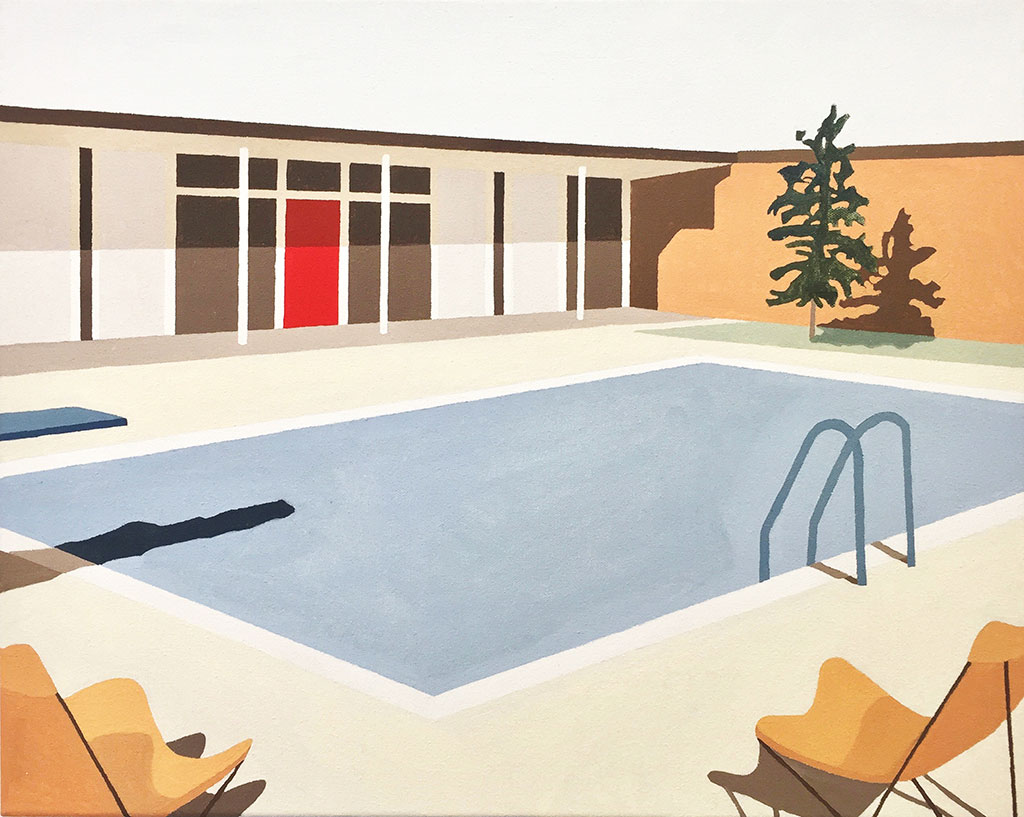 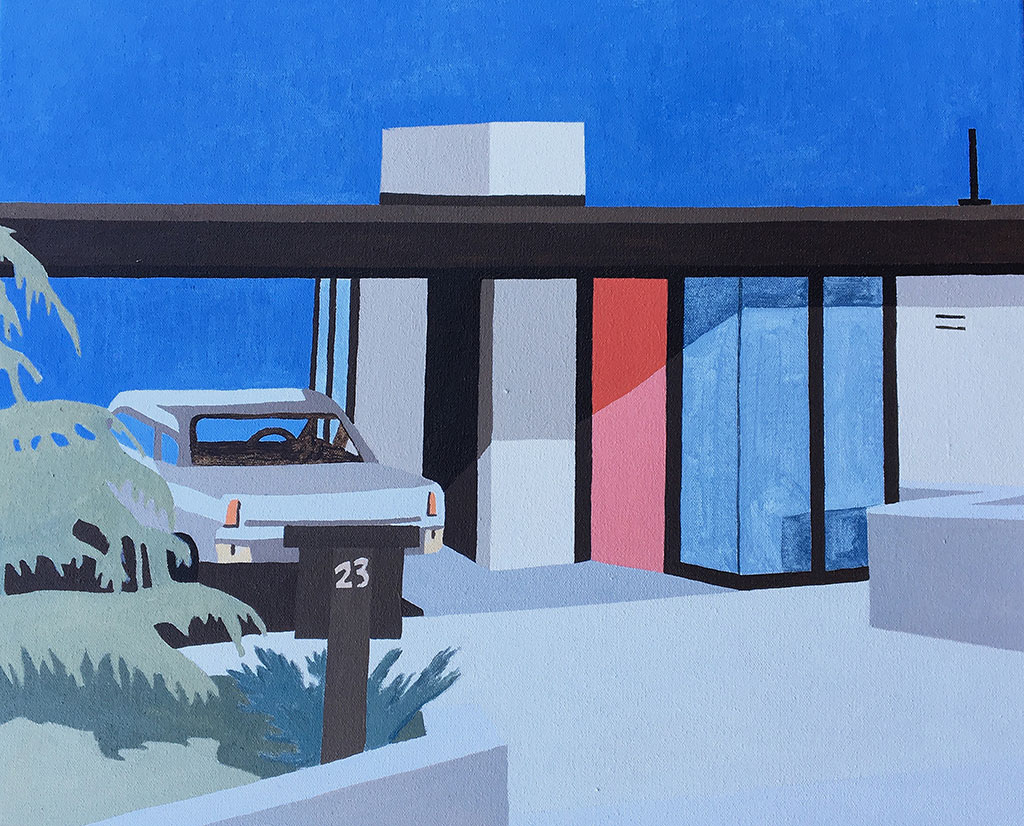 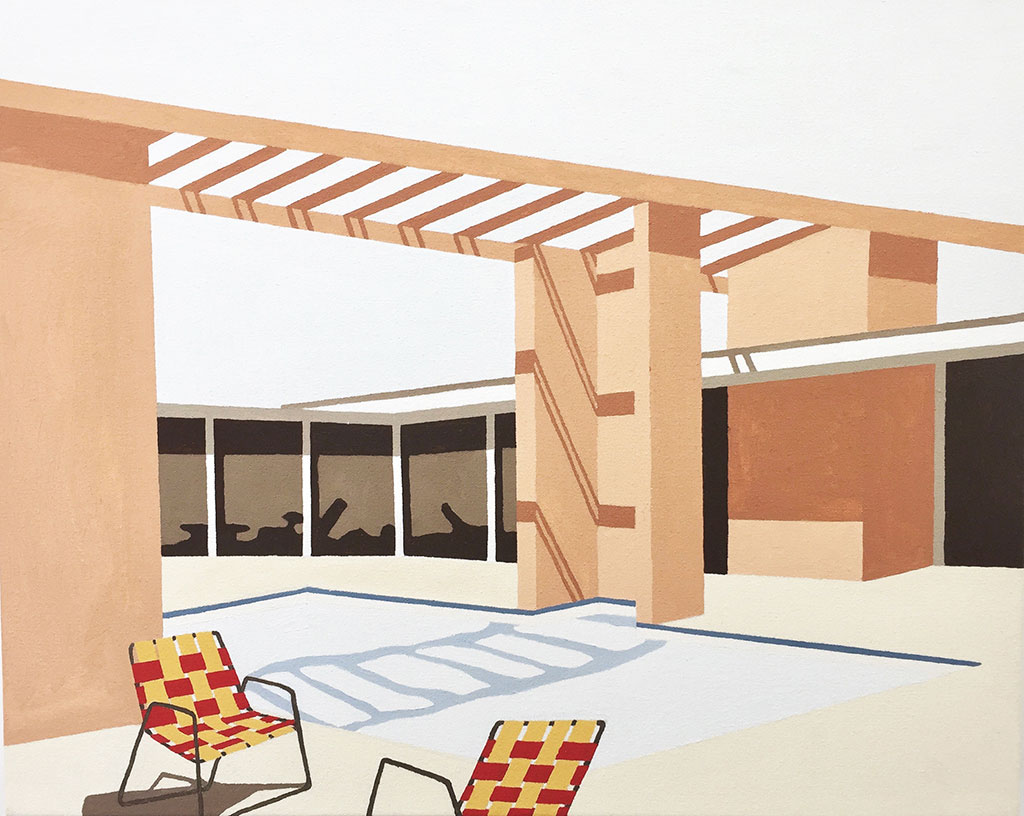 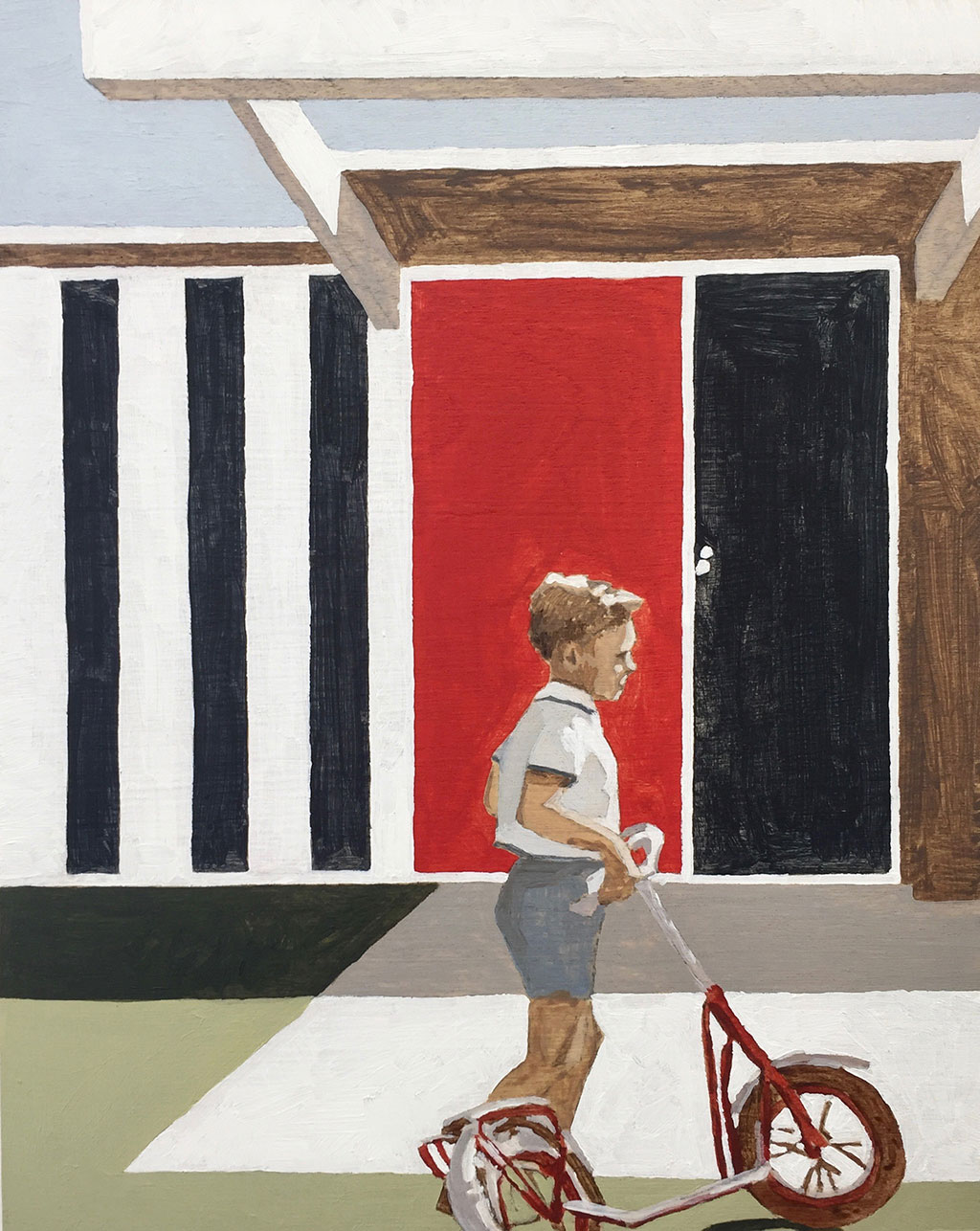 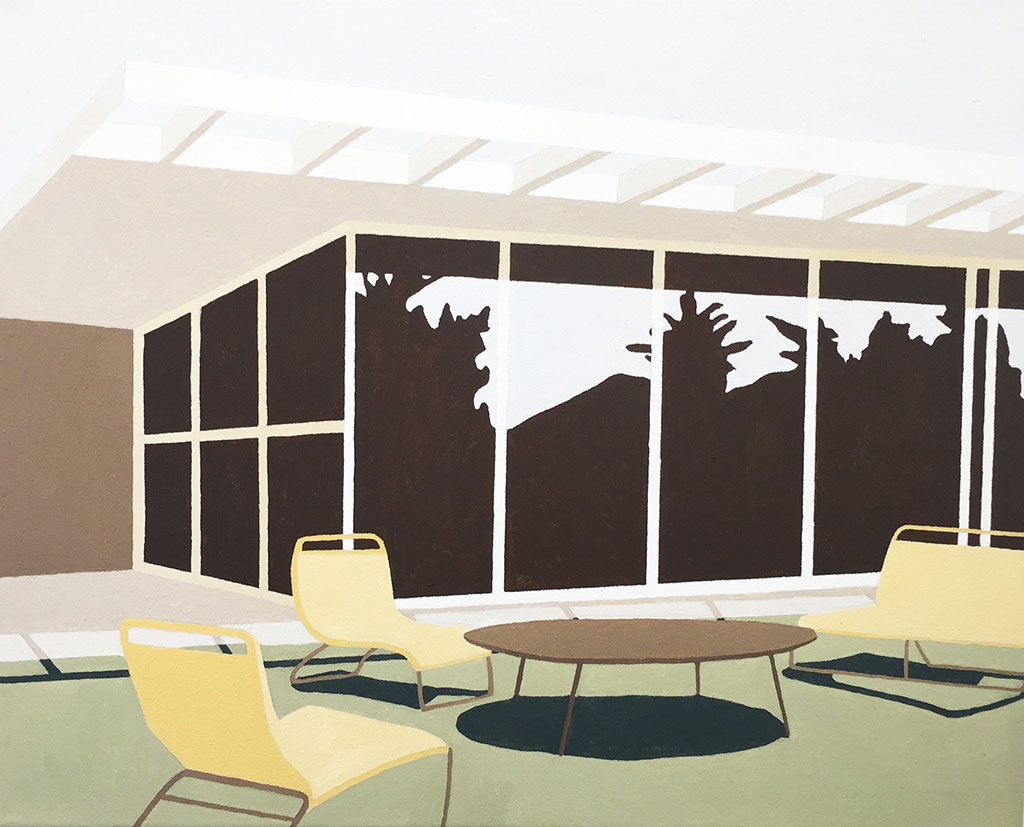 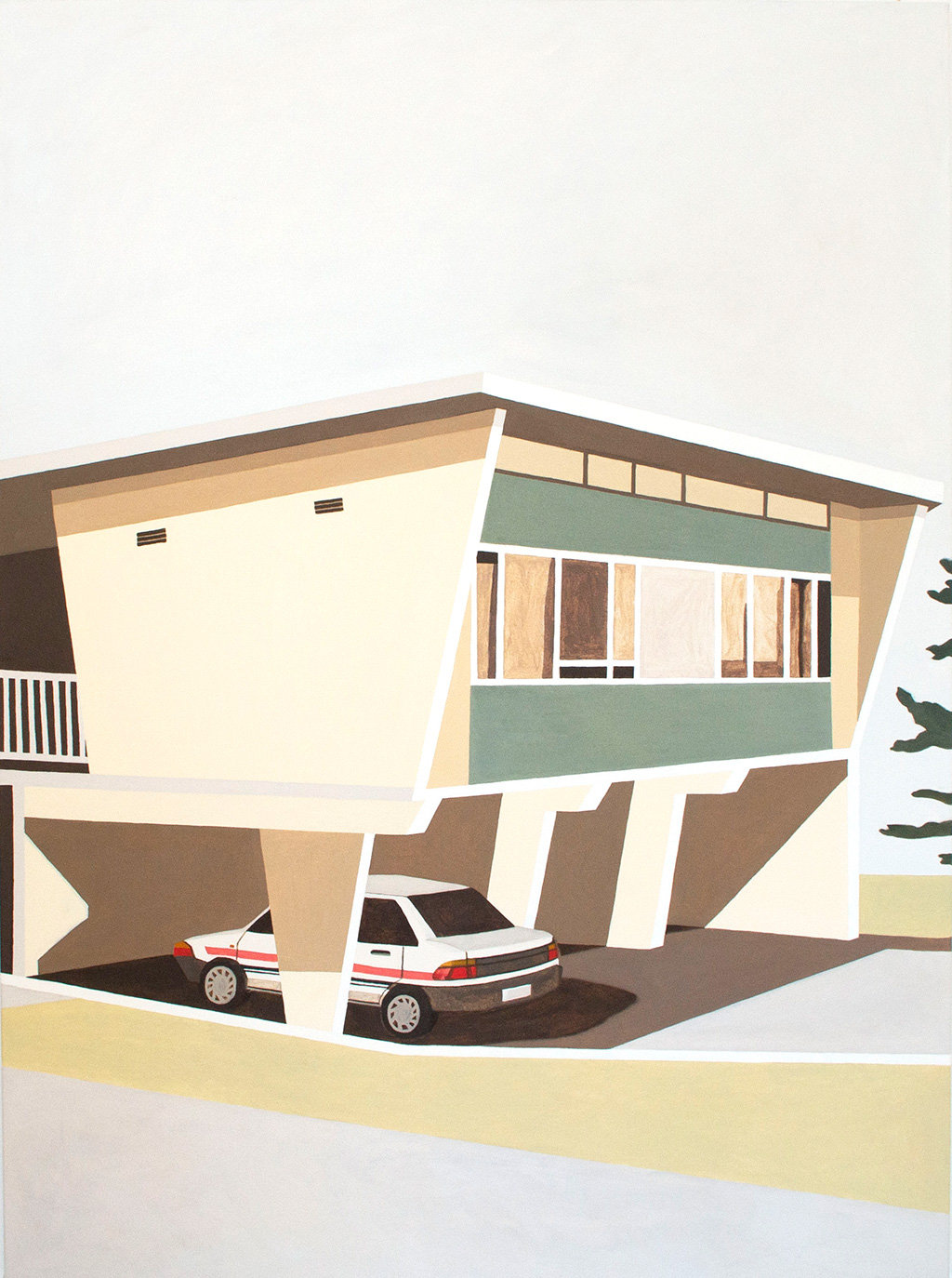 Working out of a lineage of Australian artists who have debunked the stereotypes of suburbia under a “super flat” lens, Gosse rather comes to her painting from a background of architecture. Studying at the University of Sydney before completing a Bachelor of Fine Art at the National Art School (2017), the mantra of “form follows function” finds renewed validity in her paintings.

Most recently, Eliza’s painting ‘Budgie Smuggler ‘(2017) was selected as a Finalist in the 2017 Mosman Art Prize (Sydney), and ‘Pink House’ (2017) was awarded the People’s Choice in the Waverly Art Prize – two paintings that look at Modernist architecture through a lens of classic Australian humour.

Gosse has been a regular finalist in art prizes in recent years and has regularly been included in group exhibitions for her early career.