The land waits patiently for rain and through its absence, water is present.

Saint Cloche is proud and delighted to reveal ‘Ancient River, River Red’, following on from Emily’s previous solo show, ‘Take Me There’ in 2020.

It came as no surprise to us when Emily recently received a Brett Whiteley Travelling Art Scholarship. Driven by the biophilia hypothesis, Emily continuously takes herself into the land exploring ways to translate experience into paintings. Inspired by the resilience found within nature, the landscape has become a metaphor for her own psychology. Her works explore vivifying forces of nature, while also encouraging her audience to reflect on the impact humanity assails upon the world.

‘Ancient River, River Red’ is a story that moves through resilient and dramatic landscapes held within the interior of our Country. ‘Ancient River(s)’ carve their way through the landscape and along these waterways majestically twisted ‘River Red’ gumtrees stand as symbols of wisdom and strength. 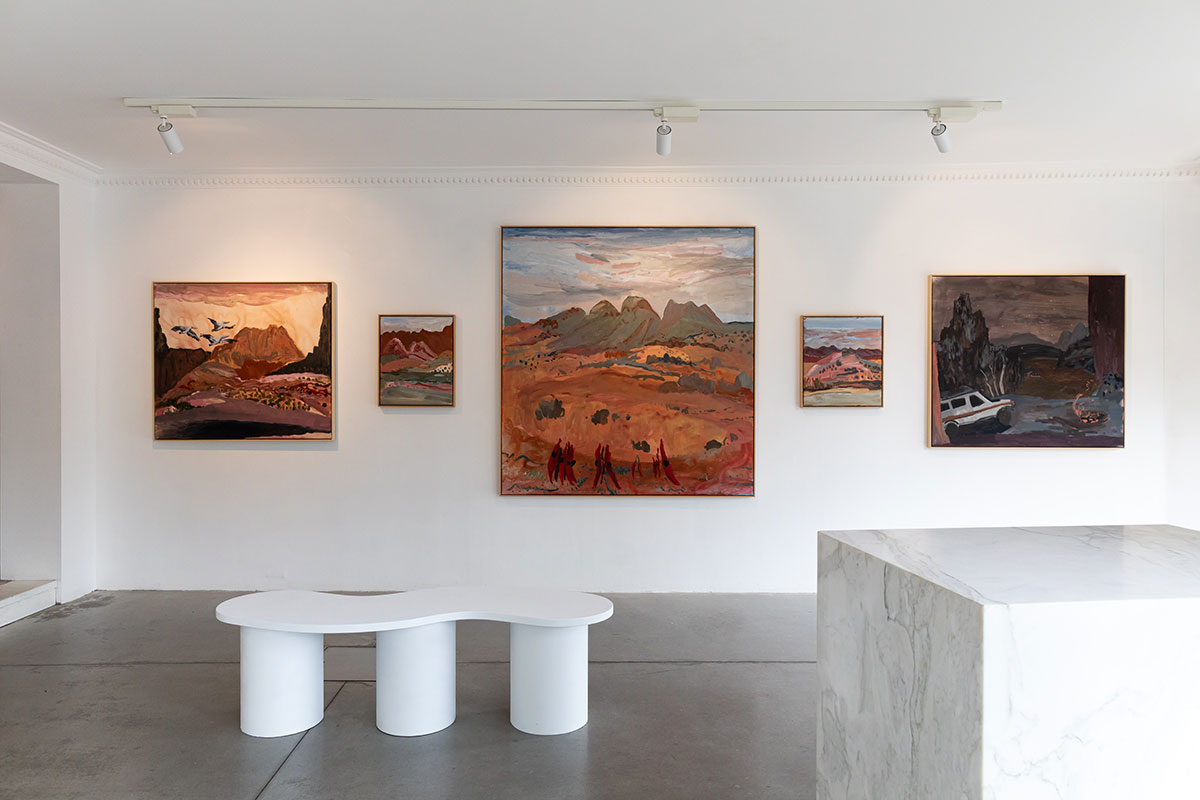 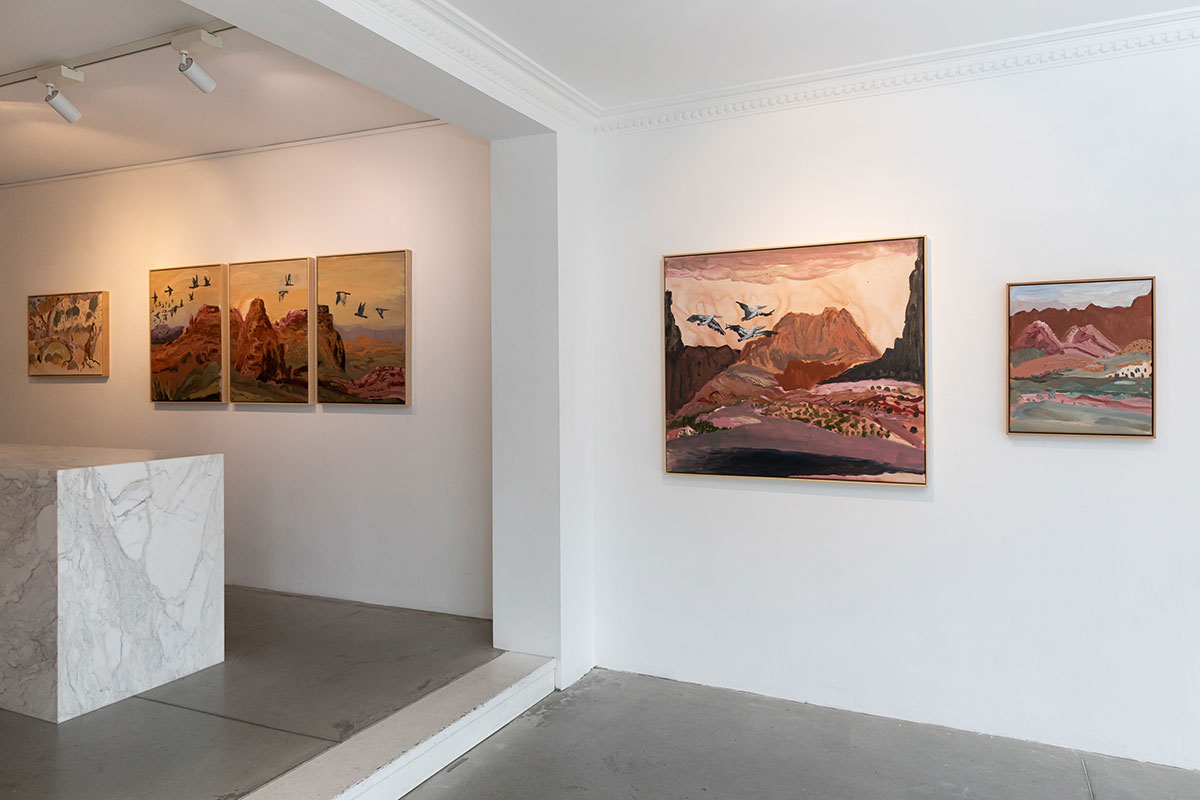 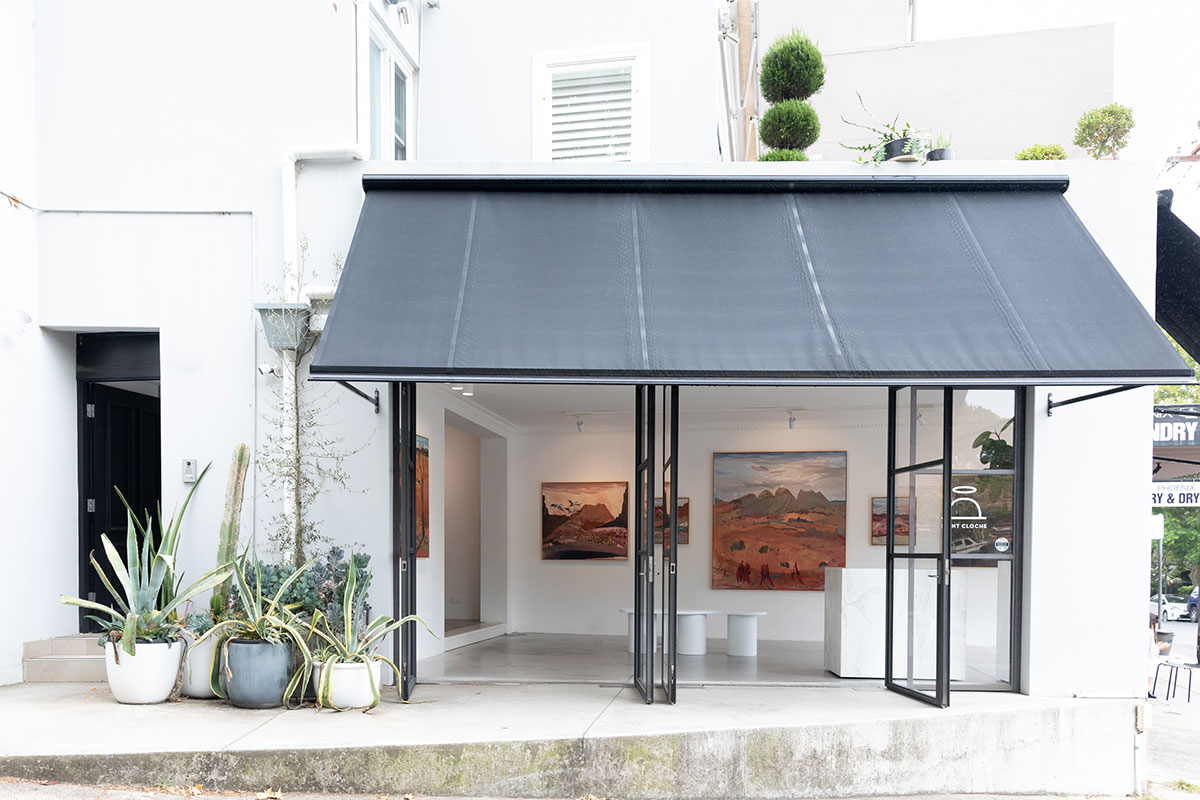 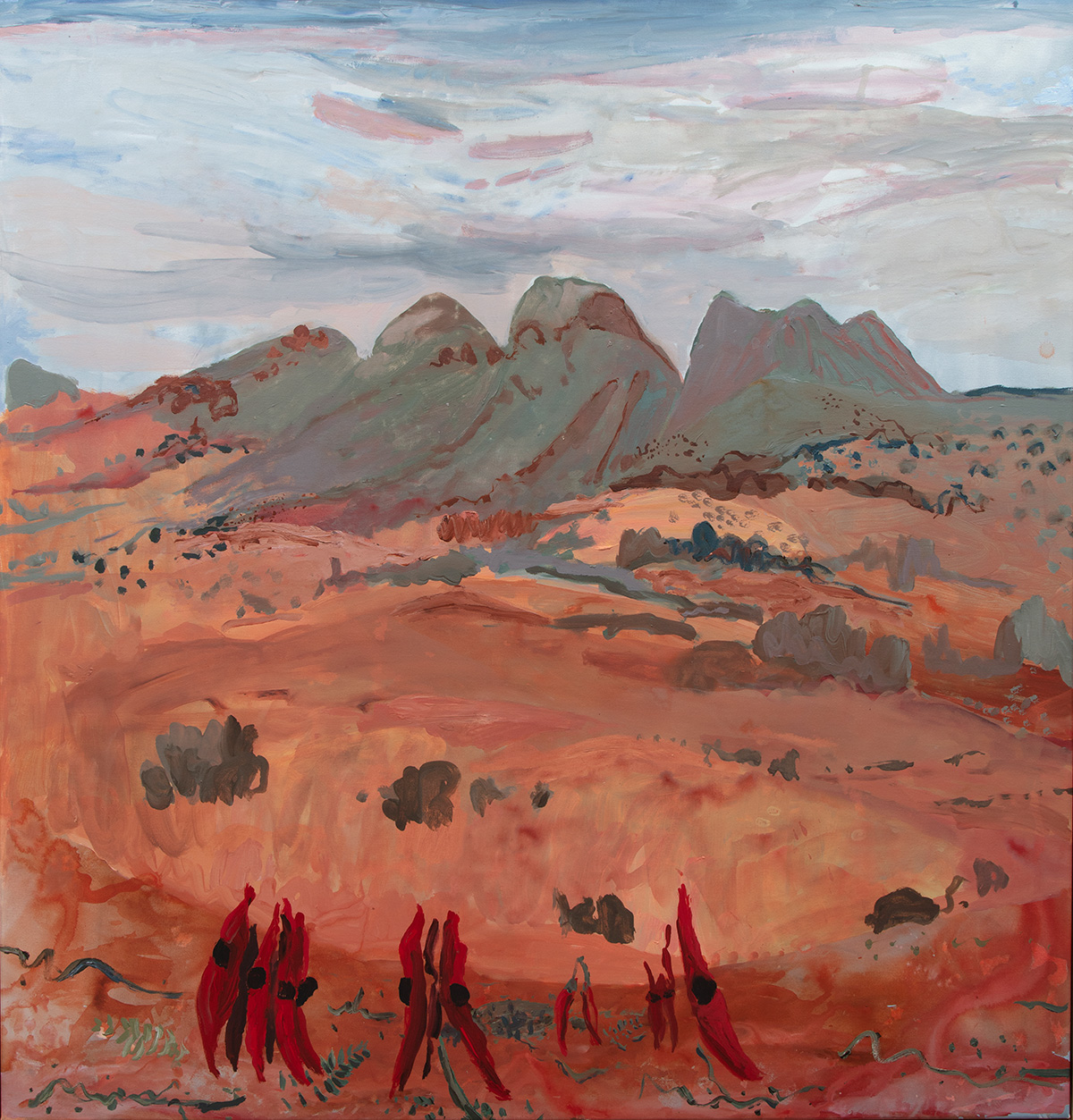 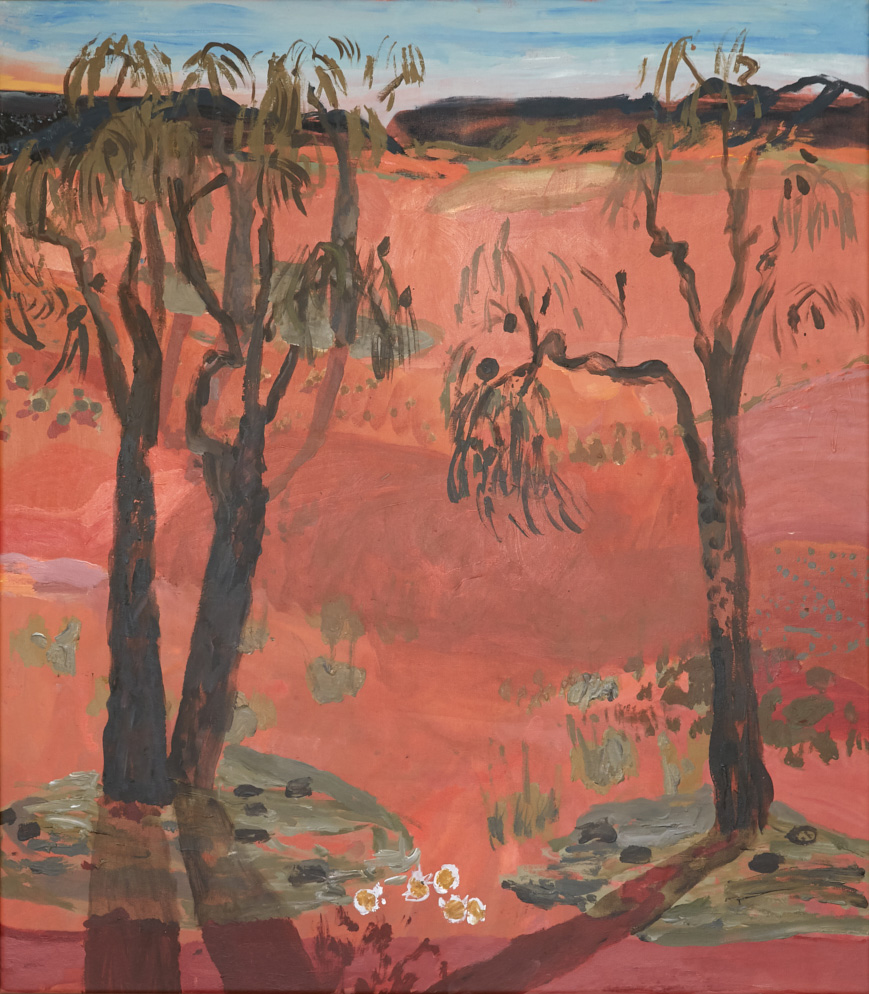 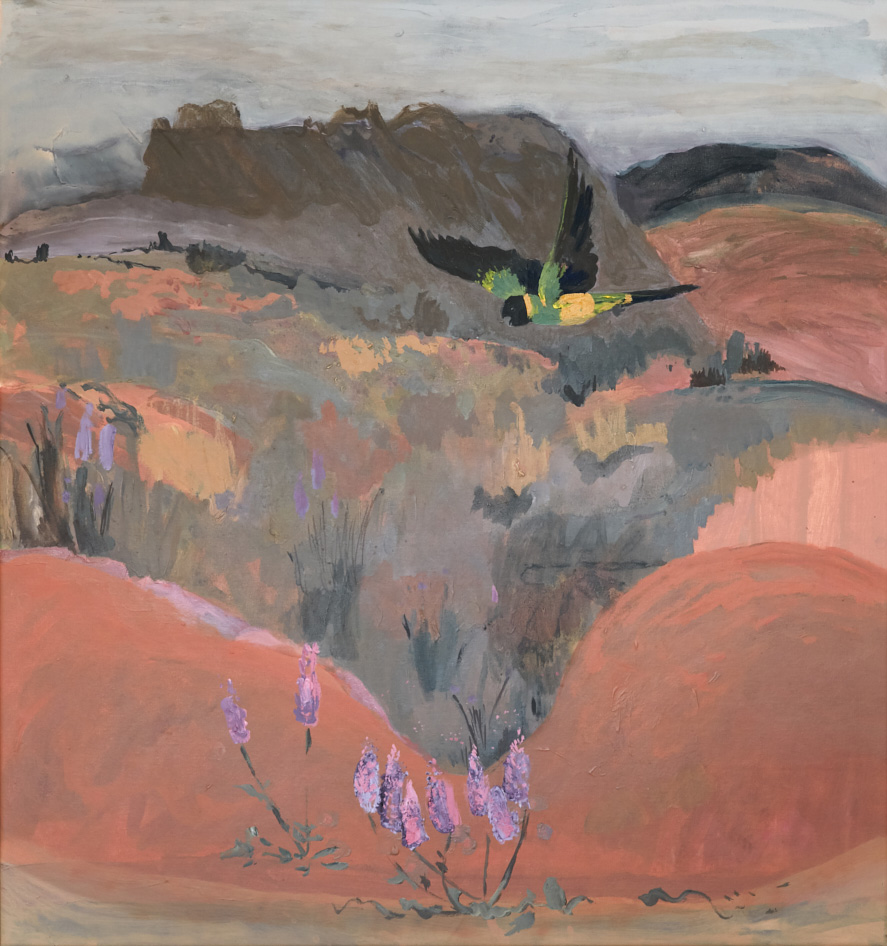 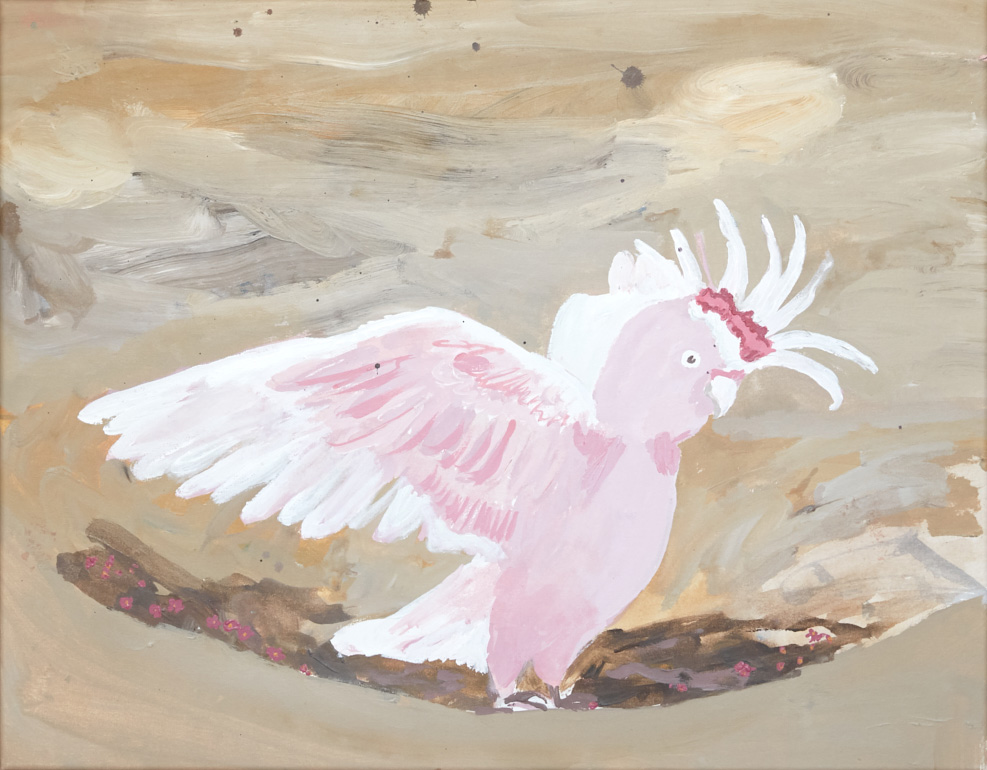 “The unique and overwhelming environments of Central Australia recite poems of water and evolution. Vertical ranges marked with tilted sedimentary lines show the history of an ancient inland sea (850 – 400 million years ago). The compressed layers of ocean deposits were pushed up (300 million years ago), creating kilometers of formidable rock formations that dissect the land. Wind, water, and time have sculpted these ranges to create sanctuaries for life to thrive, deep permanent water holes to fuel healthy and diverse ecosystems….here the world’s oldest surviving culture have lived for millennia.

As I moved through the national parks surrounding Mparntwe (Alice Springs) I reflected on this antiquity, and realised how short humanity’s story is and how big our impact has been.

I developed ‘Ancient River, River Red’ during spring, 2020, in Tyweltherreme (Ruby Gap), Tjoritja (West McDonnell Ranges), Wurre (Rainbow Valley) and Finke Gorge National Park. Dry creek beds guarded by River Reds, and accompanied by rolling orange sand dunes, pink clay pans, colourful, boisterous birds, sunbaked reptiles, humble Desert Oaks, and opportunistic wildflowers, all led me to oasis camps. I worked on days that were too hot to think, contrasted by days of cold winds and constant rain. Painting ‘en plein air’ was guided by the flux of this time-honoured place. I learnt to listen to the land, adopt the patience, humility and adaptability required to yield to nature’s course. 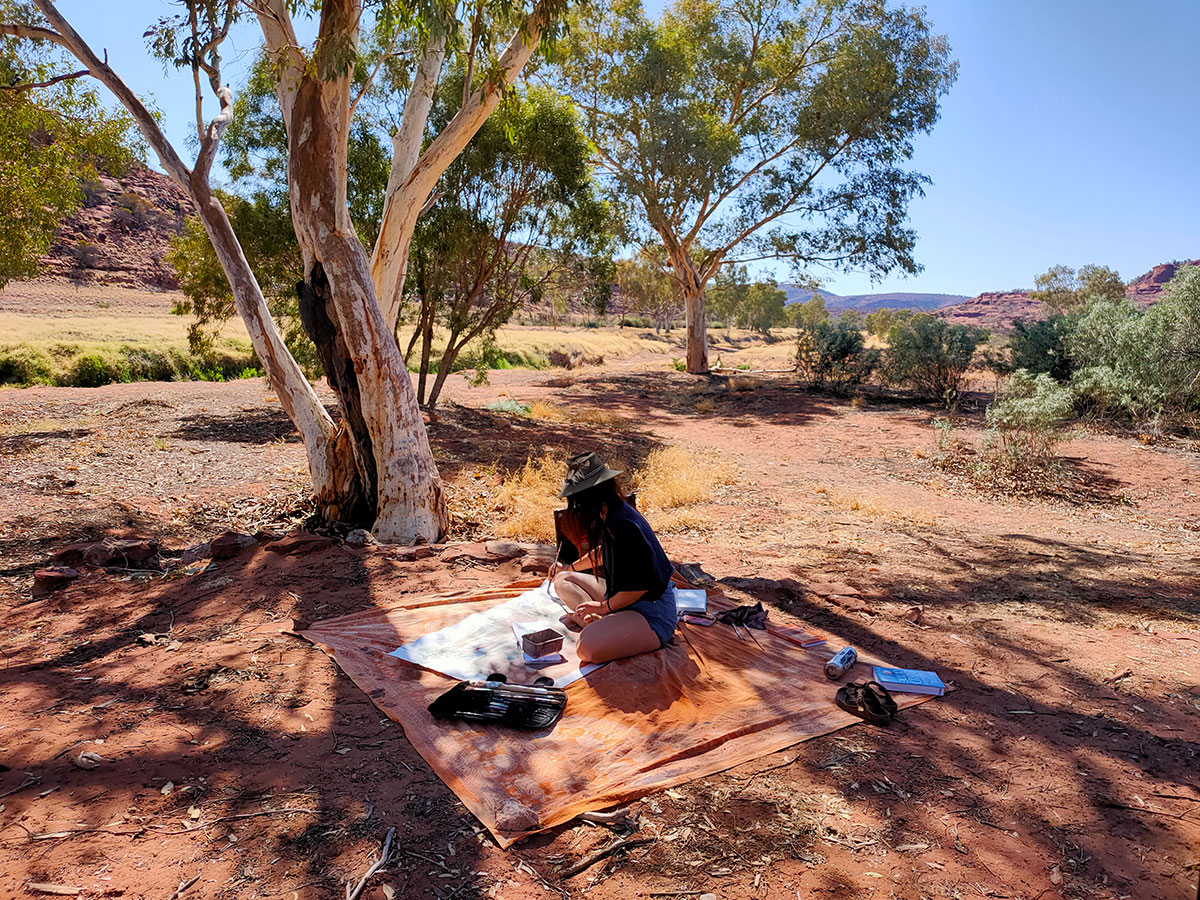 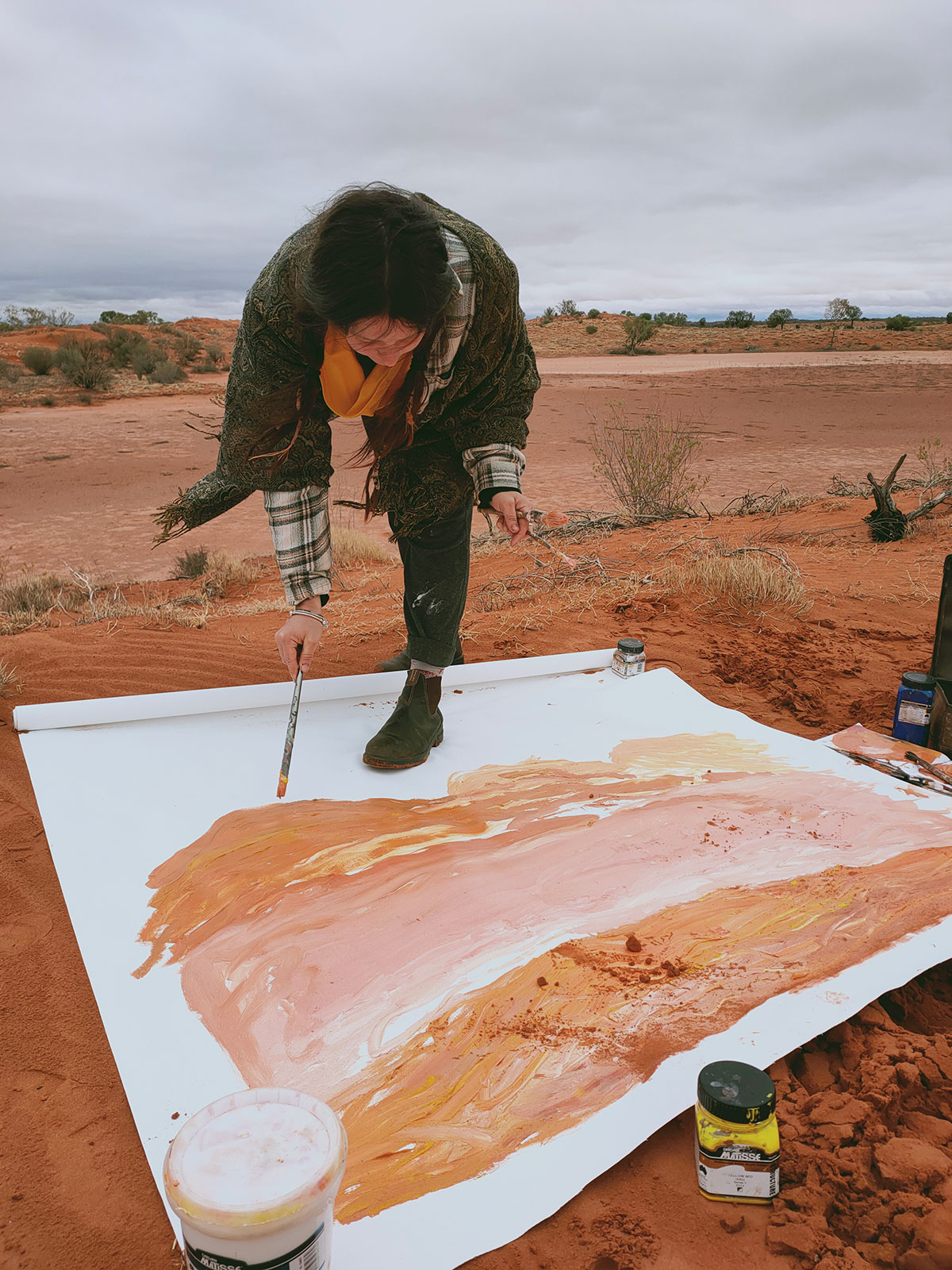 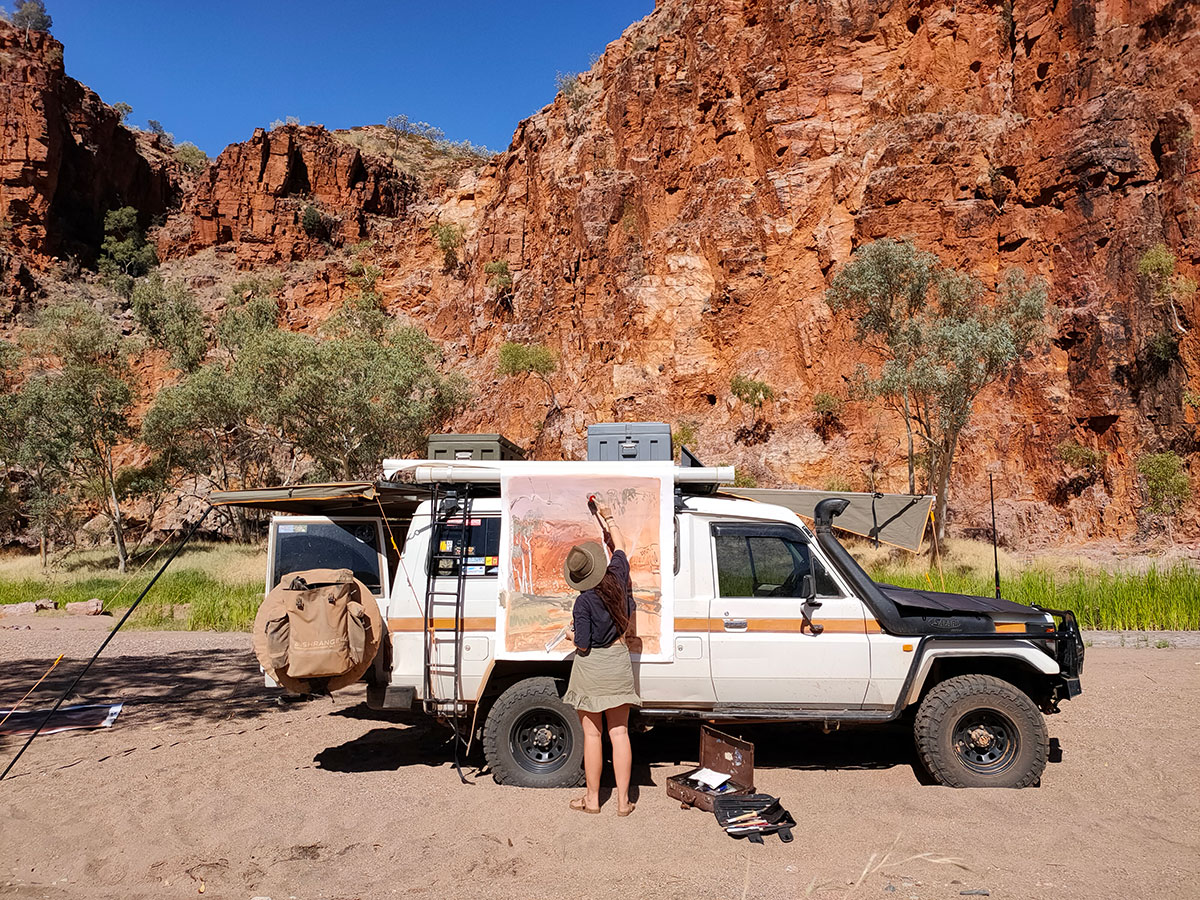 The paintings needed to be emphatic but also provide a weightless relief of peace and calm to my overstimulated mind. I wanted the fluidity of the land to be evident in the works, light washes of acrylic paint autonomously moved across the canvas. Painting fast for escapism in a semi-sun stroked state, thick, unmixed paint became the audacious trees and the familiar ranges of every horizon. Moody skies developed as rain threatened, but mostly the vastsaturated blue overhead gave pause to the weathered and detailed life below. This exhibition is only a glimpse of the inspiration given by this place.

As globalisation develops, beyond the ability of a land that takes millions of years to evolve and adapt, universal concerns grow. The land is what connects all life, but the future of these sensitive environments depend on humanity’s capriciousness.

I acknowledge the long-standing connection First Nations Australians have with the country. With great respect I thank the traditional custodians for permitting me to learn, work and document the landscapes in Central Australia. With particular thanks to the Arrernte, Western, Southern and Eastern Arrernte People, the Luritja People, the Pitantjatjara People, and The Northern Territory Parks and Wildlife Service.” 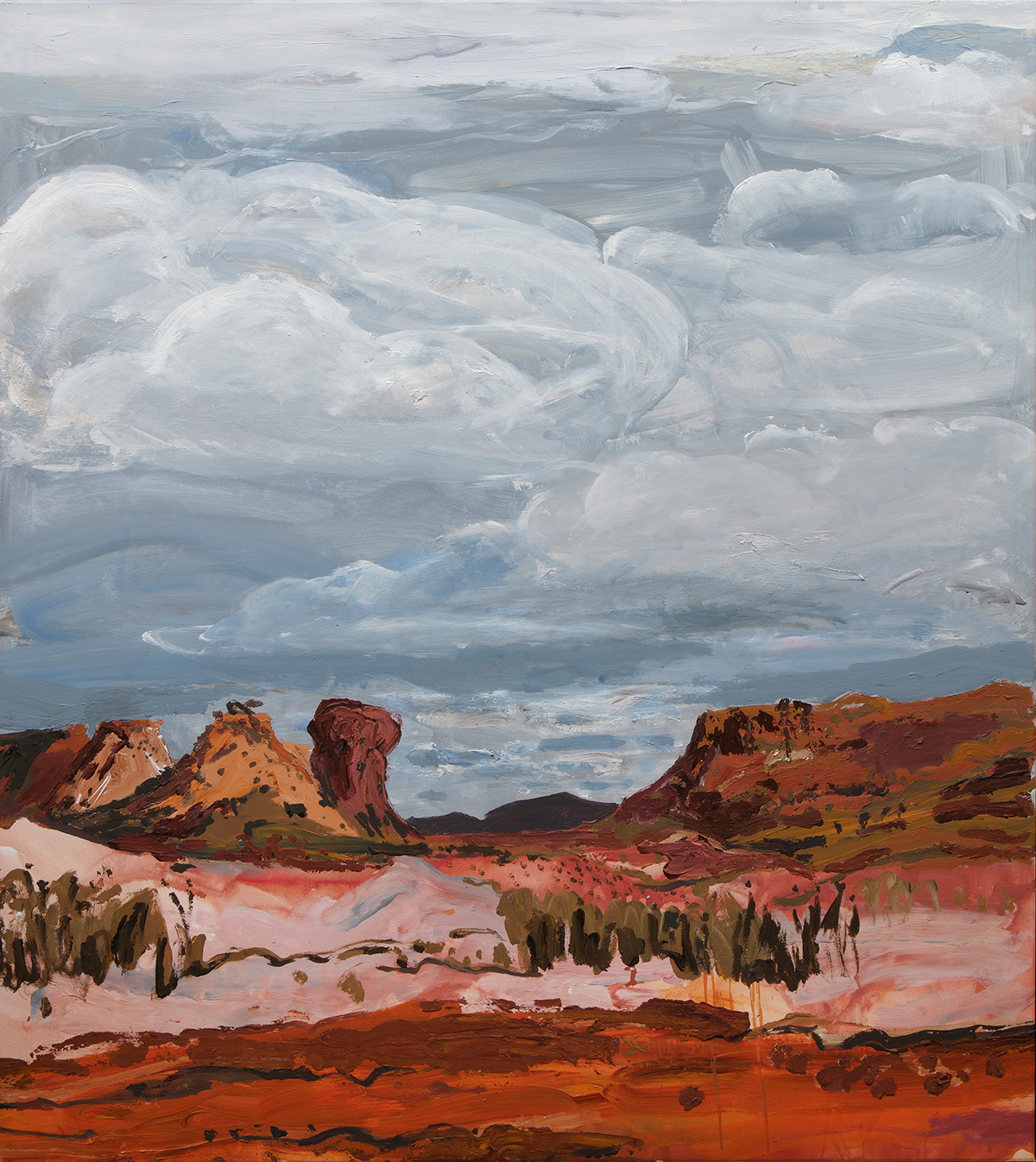 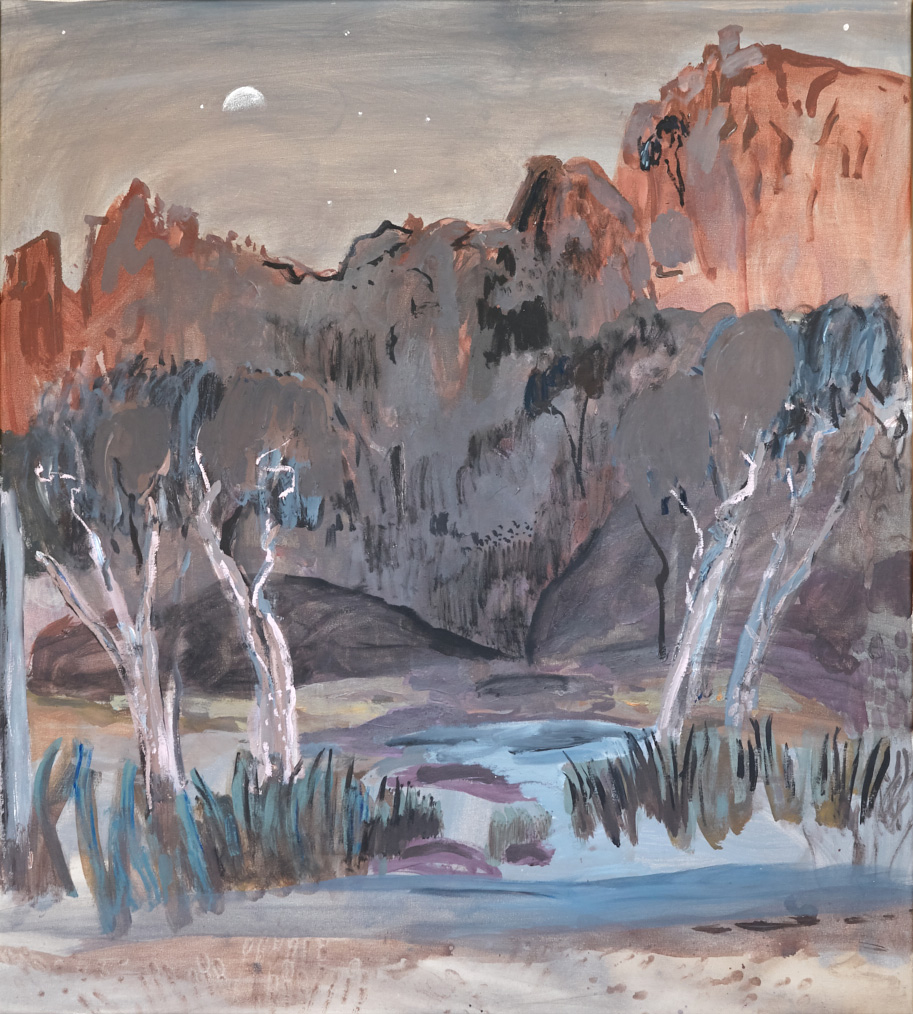 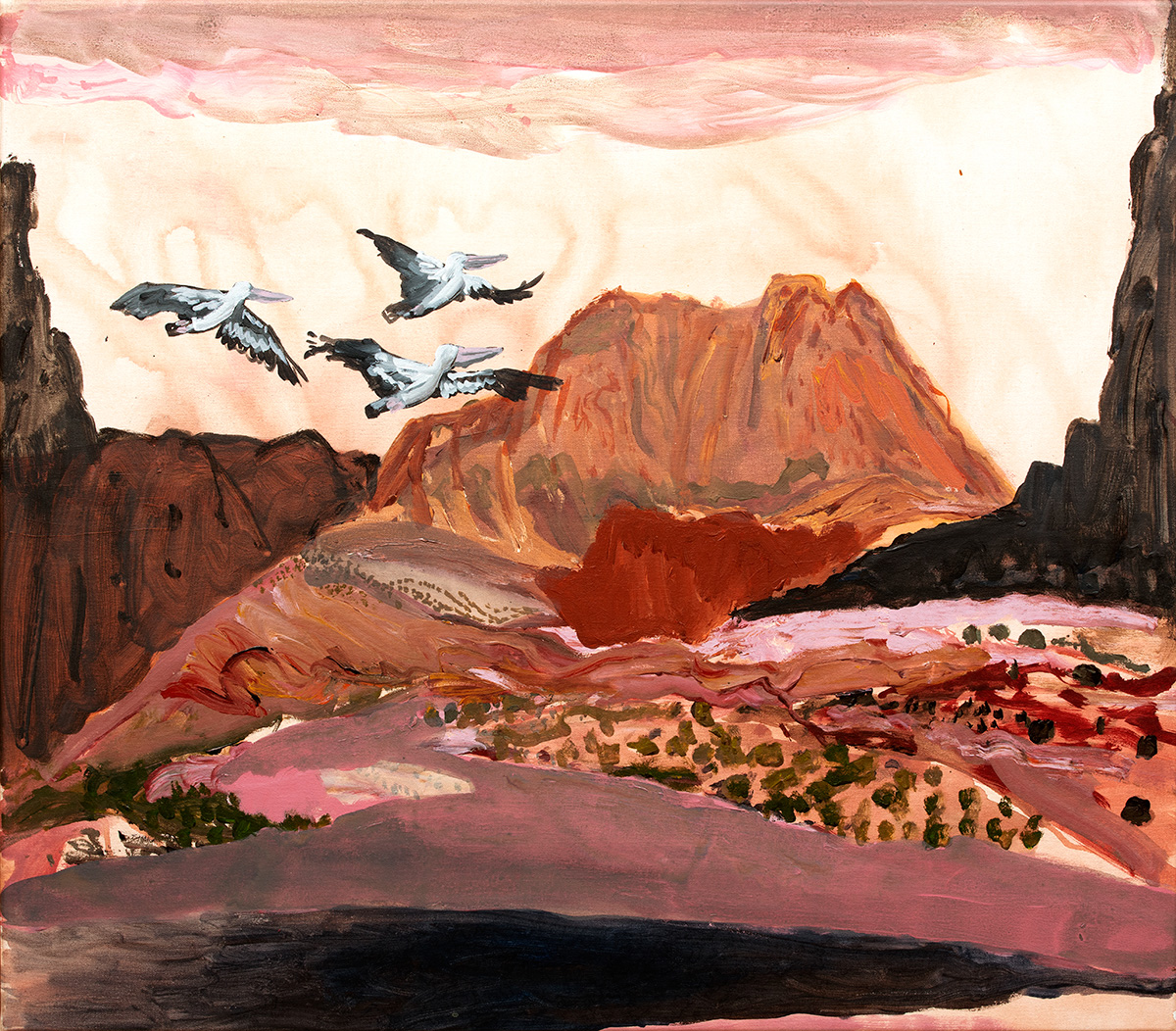 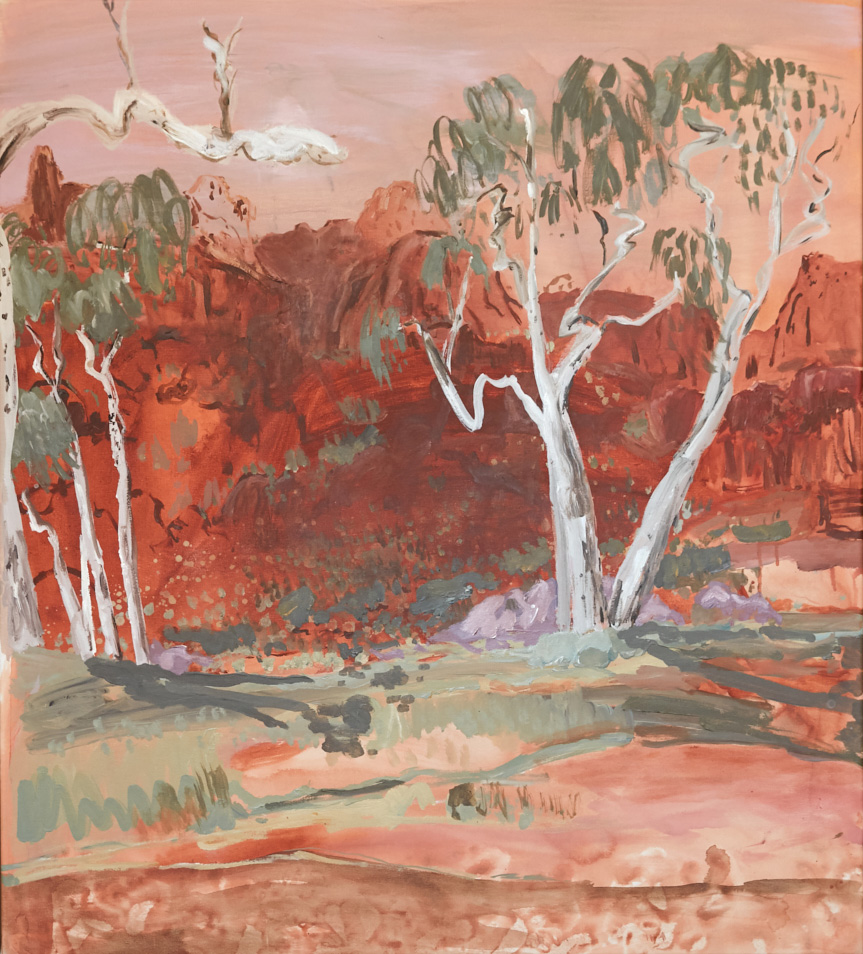 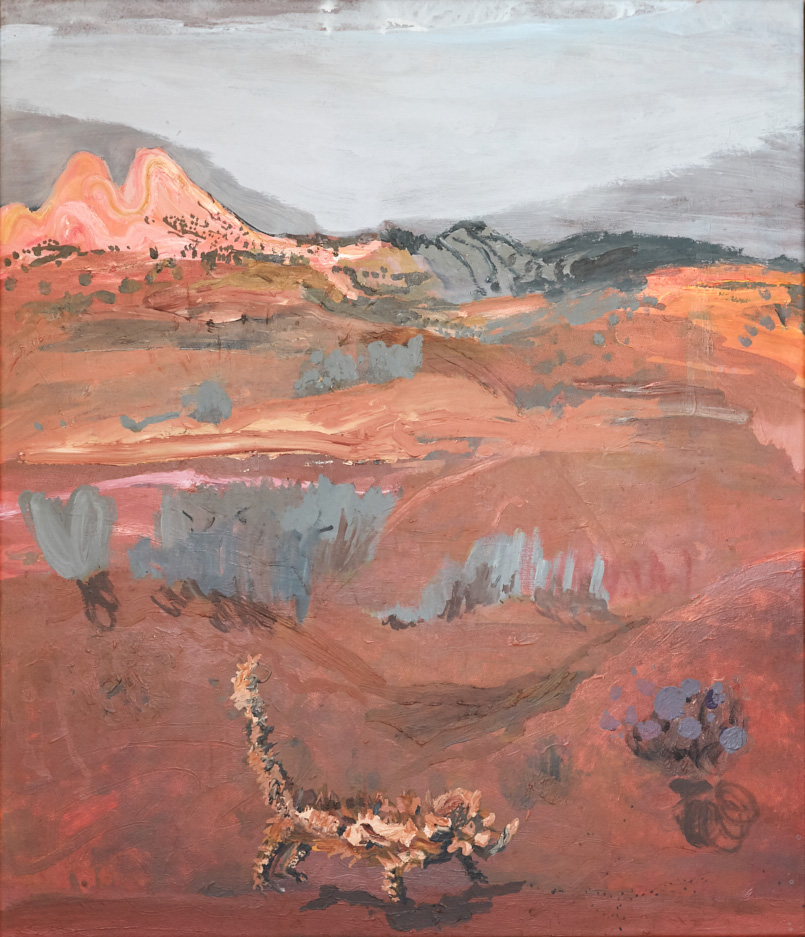 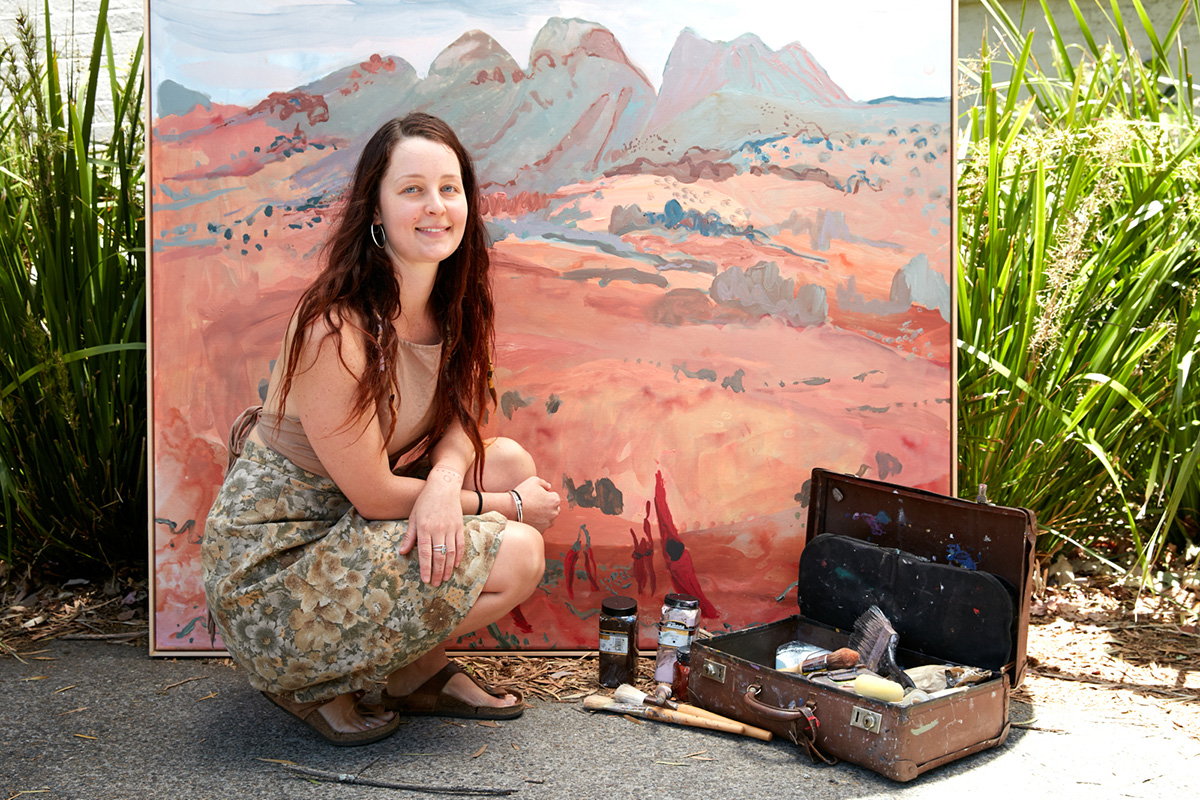 Emily’s practice is a natural inquisition, fulfilling her innate desire to be in the landscape. “Over time I have developed a satisfying fixation of both; the Australian environment, and the process of painting itself.”

Emily holds a Bachelor of Visual Arts from Southern Cross University. Granted a Rising Star Scholarship during her studies, she graduated in June 2016. Between 2016 -18, Emily received a Young Regional Artists Scholarship from Create NSW to continue her investigations of primordial connections between humans and the natural world.

“I find the immediacy of painting from life, and the distortions resulting from processes of remembering, an engaging way to articulate human experience.”

Since June 2018 Emily has been traversing the country, living and working out of her car. A formative experience, her practice is now set in foundations of ‘en plein air’ painting. Documenting the immediate biota, then using ‘outdoor studios’, reflects upon memories, attempting to push beyond exclusively visual stimuli.

Emily was awarded the Macquarie Group Emerging Artist Prize in 2019 for her work ‘Alive in the Dead of Night’. Most recently, she received a Brett Whiteley Travelling Art Scholarship, 2020. Emily’s works have been acquired by the Macquarie Group, Ballina Shire Council, and is represented by Saint Cloche Gallery in Sydney.

Emily Imeson and Ancient River, River Red are featured in: