A CERTAIN SLANT OF LIGHT

A Certain Slant of Light

A Certain Slant of Light is a group exhibition featuring the painted artworks of Anh Nguyen, Anna May Henry, Claudia Greathead and the ceramics of Maryam Riazi.

The notion of light is intrinsically and enduringly tied with our experience of art. The implied light in a painting elevates the work beyond the two dimensions of its physicality. Light creates shadow, dimension, mood, temperature, and is the representation of what and how the artist sees. In ceramics, the shadows formed by the work are often as elemental as the clay structure itself.

This exhibition is so named as it was the unifying and prevailing element that each artist described, separately, when discussing their work for this show.

Anh Nguyen lives and paints from the NSW South Coast, with her partner and 4 children. She has been painting and drawing for more than 20 years (since a young girl!), but only began to make her work available in 2015. Since then, she has been accepting portrait commissions and selling original works and giclee prints via Etsy, local art shows and stores. In 2016 she was a finalist in the St George Art Awards and Little Things Art Prize.

“My work is inspired by life; daily moments, human activity, small observations. Often, I am also inspired by other art – the composition in a photograph, a line of prose or poetry, a still from a film. “A Certain Slant of Light” celebrates this theme, the passing of the day or a period in time, as a moment is illuminated and made beautiful to the observer/painter.” 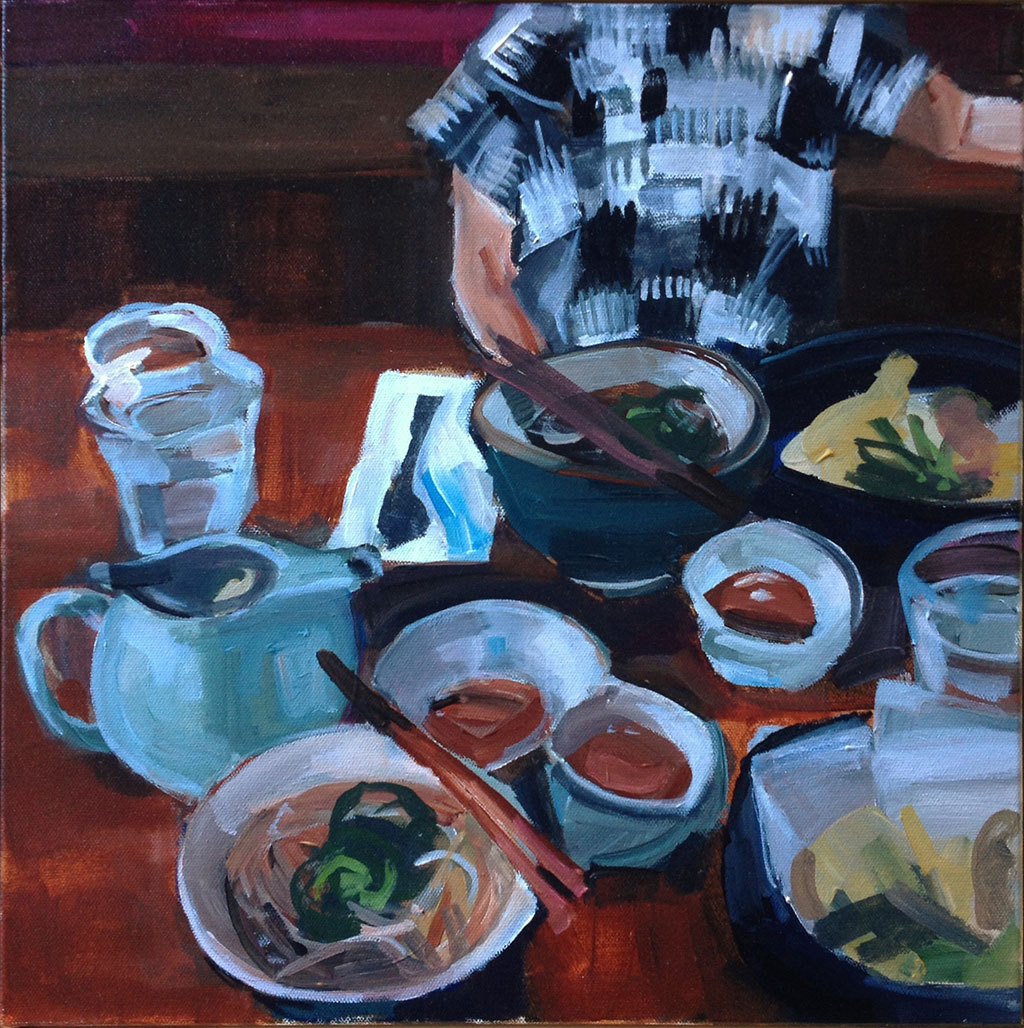 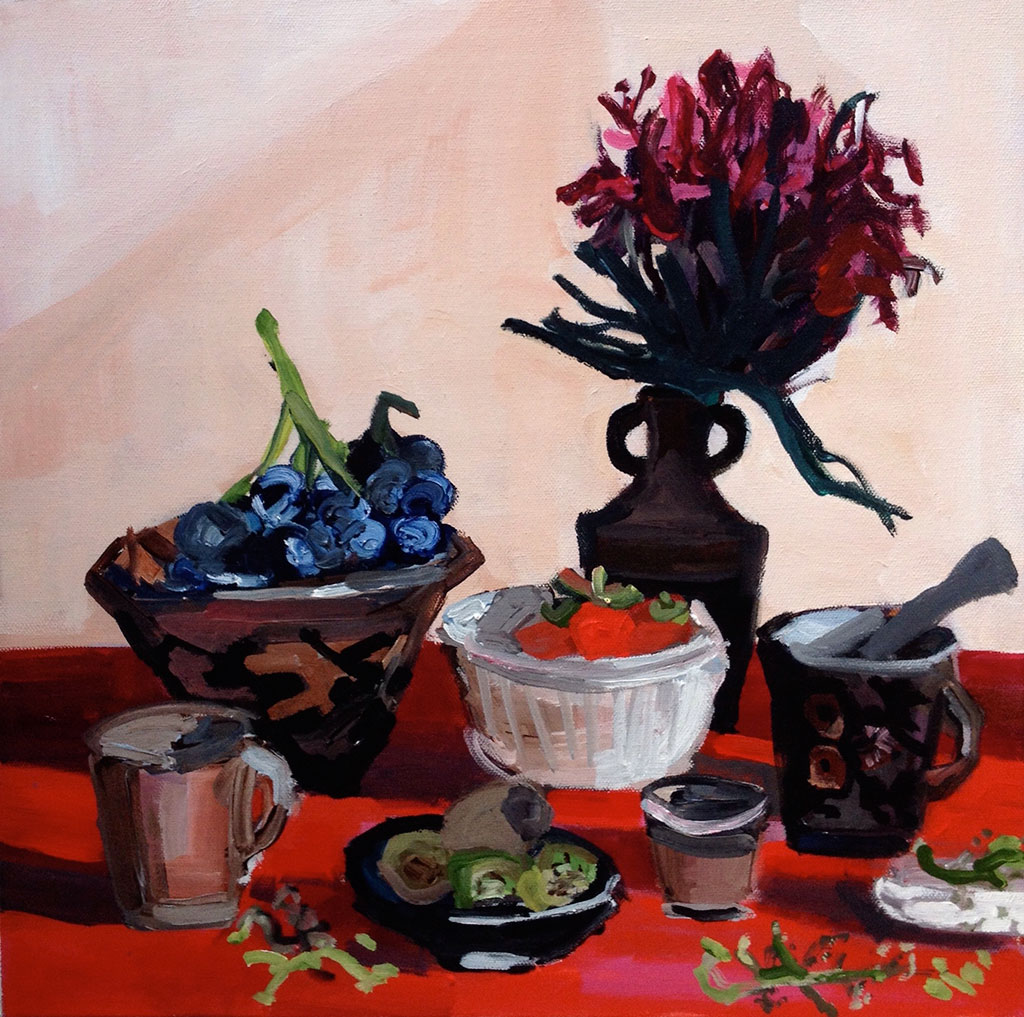 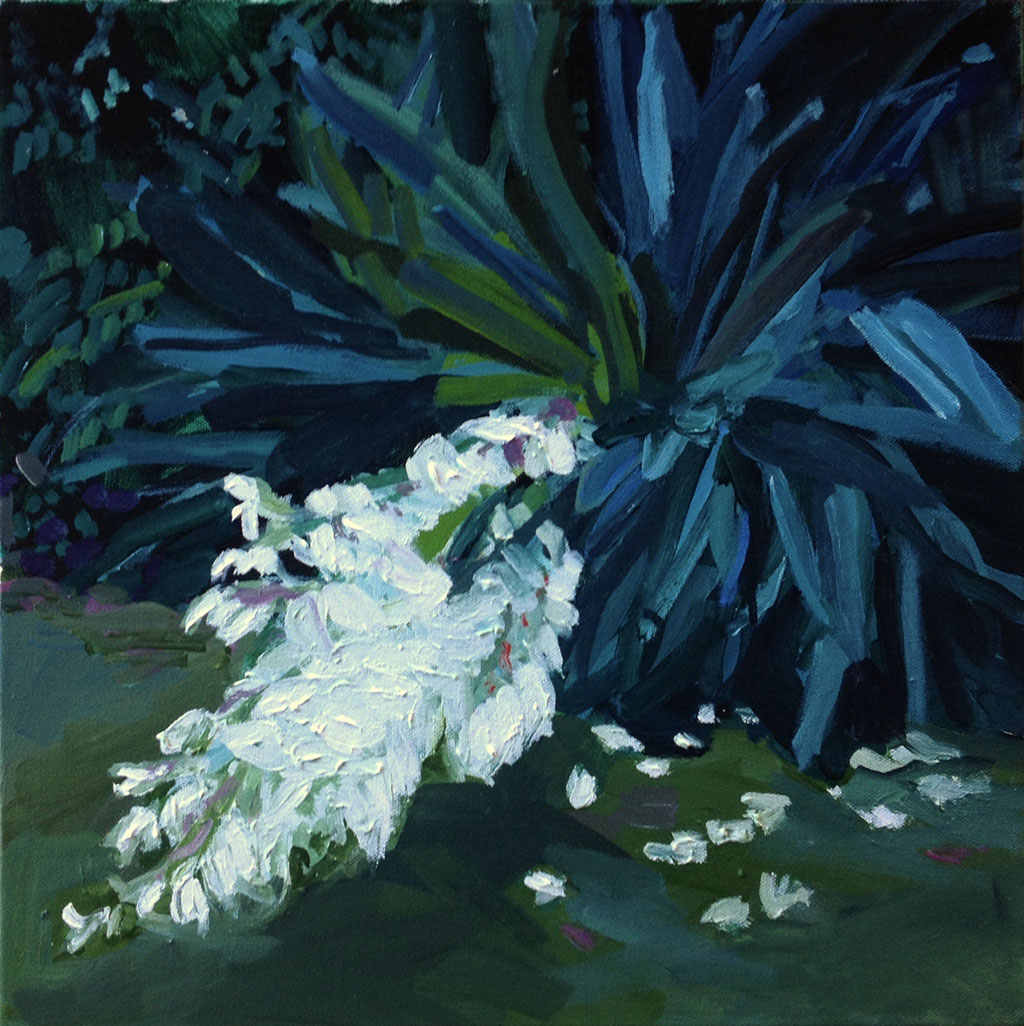 Anna May Henry (b. 1995) is a Sydney-based painter and a talented recent graduate of the National Art School, Sydney, where she attained a Bachelor of Fine Arts (Painting). Anna’s inclusions in the annual NAS graduate exhibition in 2016 were met with acclaim, with all of her pieces sold at the opening. Since then Anna’s work has generated much excitement.

“My practice is centred on still life painting from an observation-based studio practice. I focus on native Australian flora reflecting my interest in their unique aesthetics that also bring a sense of identity to the works. My paintings play with mark making through a diversity of paint application that negotiate the fundamentals of painting. I am inspired by the play of light with shadows, patterns and colour, I surround myself with this and paint what I enjoy.” 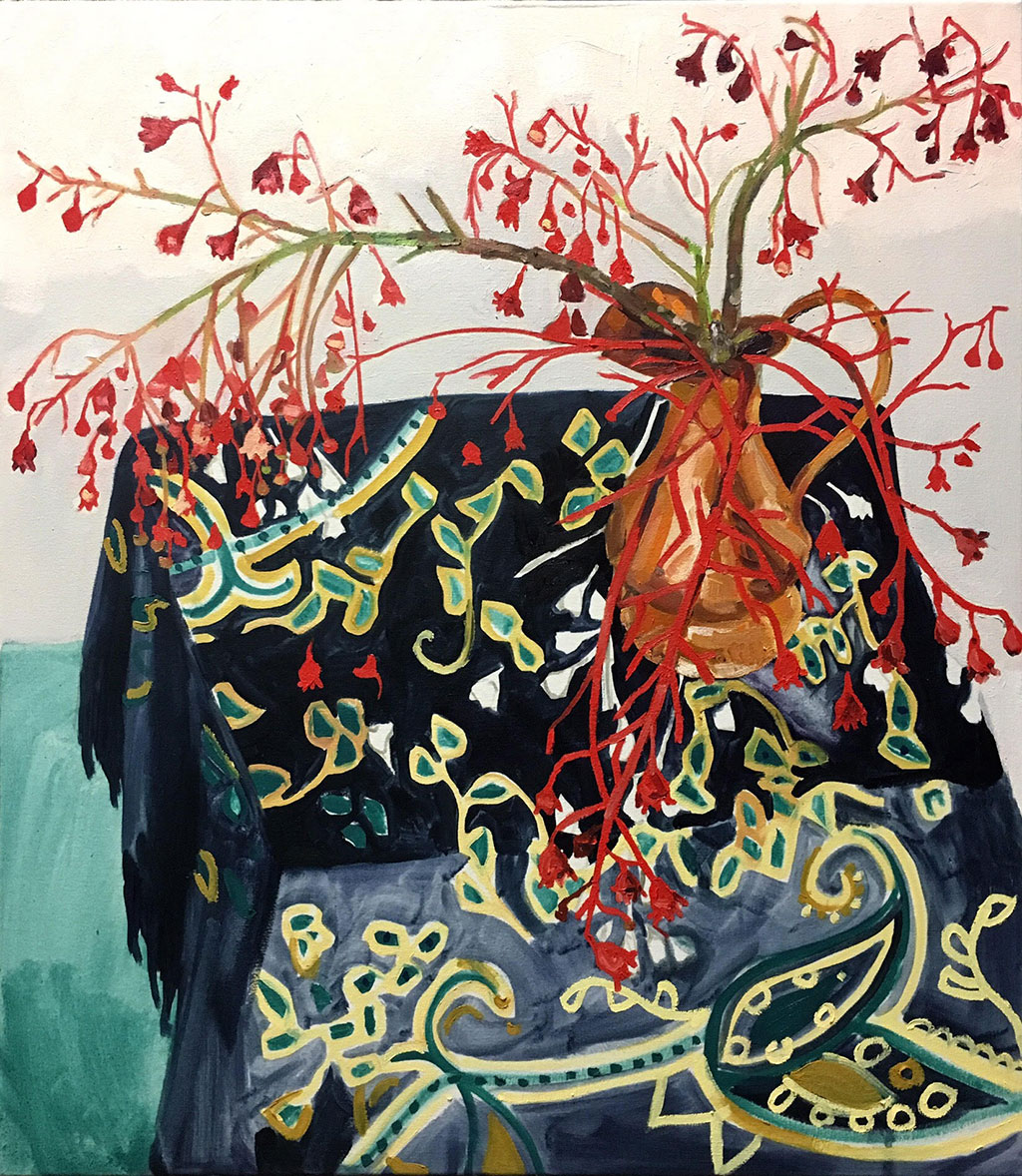 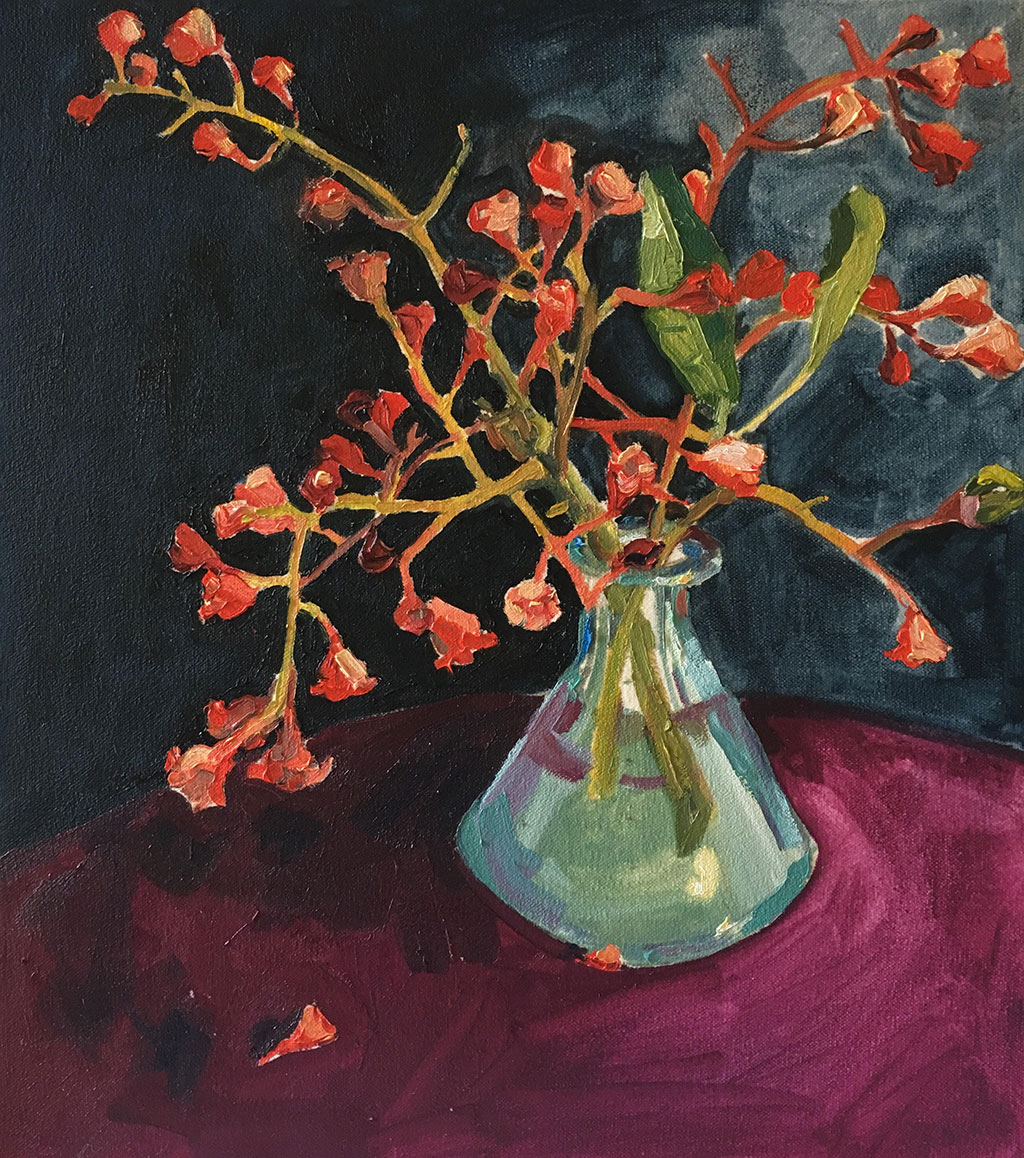 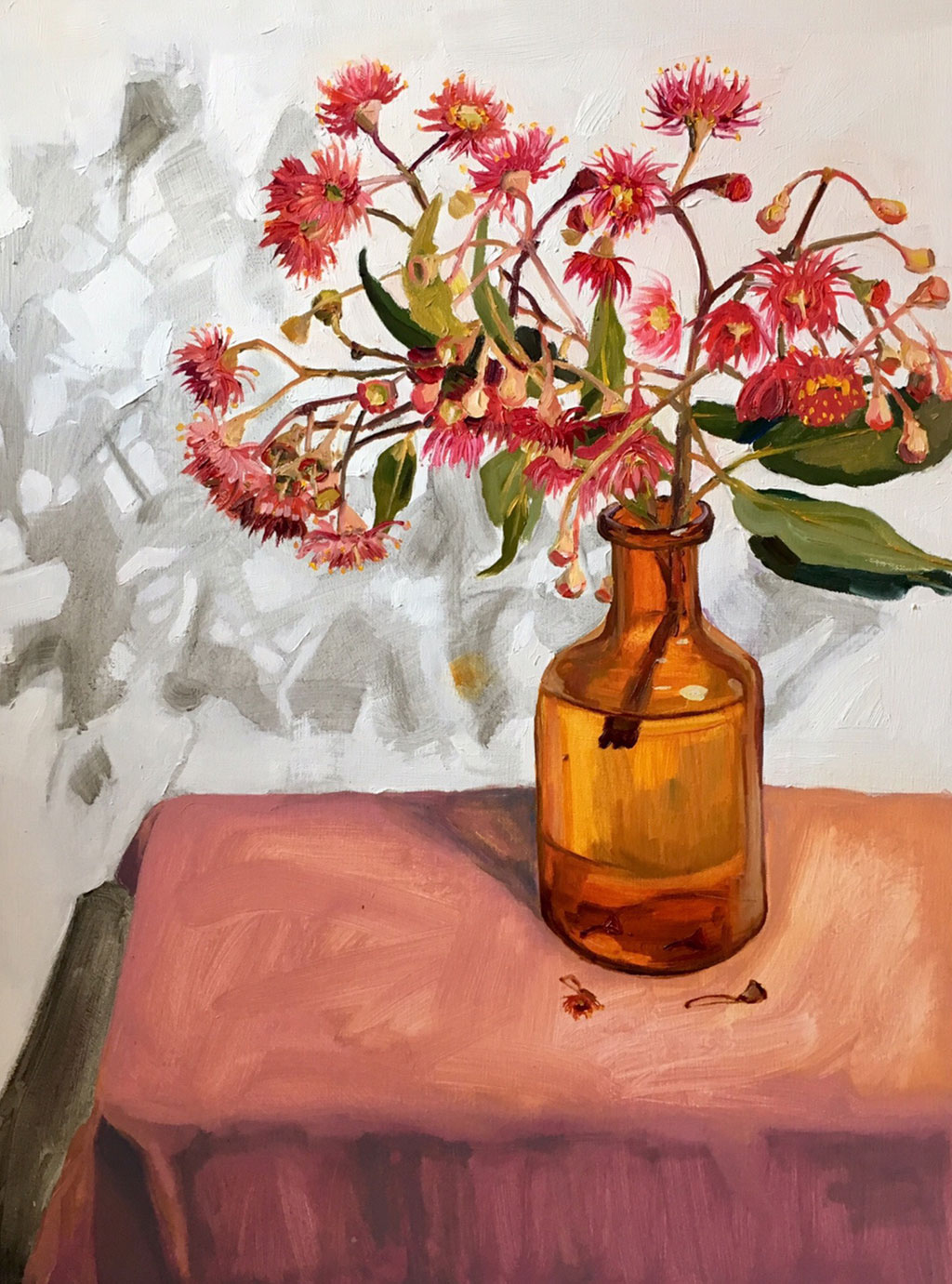 Claudia Greathead is a young Brisbane-based artist who graduated from Queensland College of Art in 2014 with a Bachelor of Fine Art, majoring in painting.

Since graduating, Greathead has been exhibiting in mostly Brisbane and has been a finalist in the National Churchie Art Prize twice and a Semi Finalist in the Doug Moran National Portrait Prize in 2016.

Claudia describes her style as “gestural – and I hope a little bit funny”.

Recently her practice is centered on mourning the past and appreciation of the present. 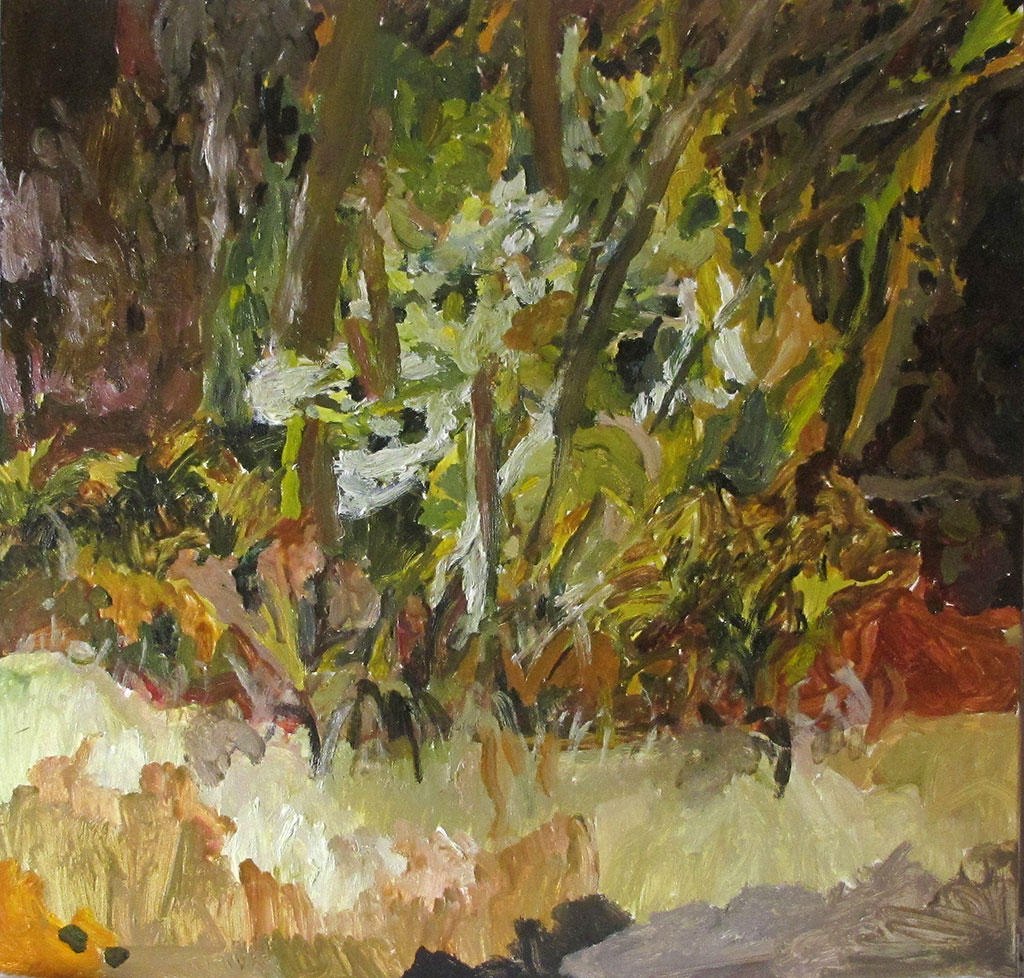 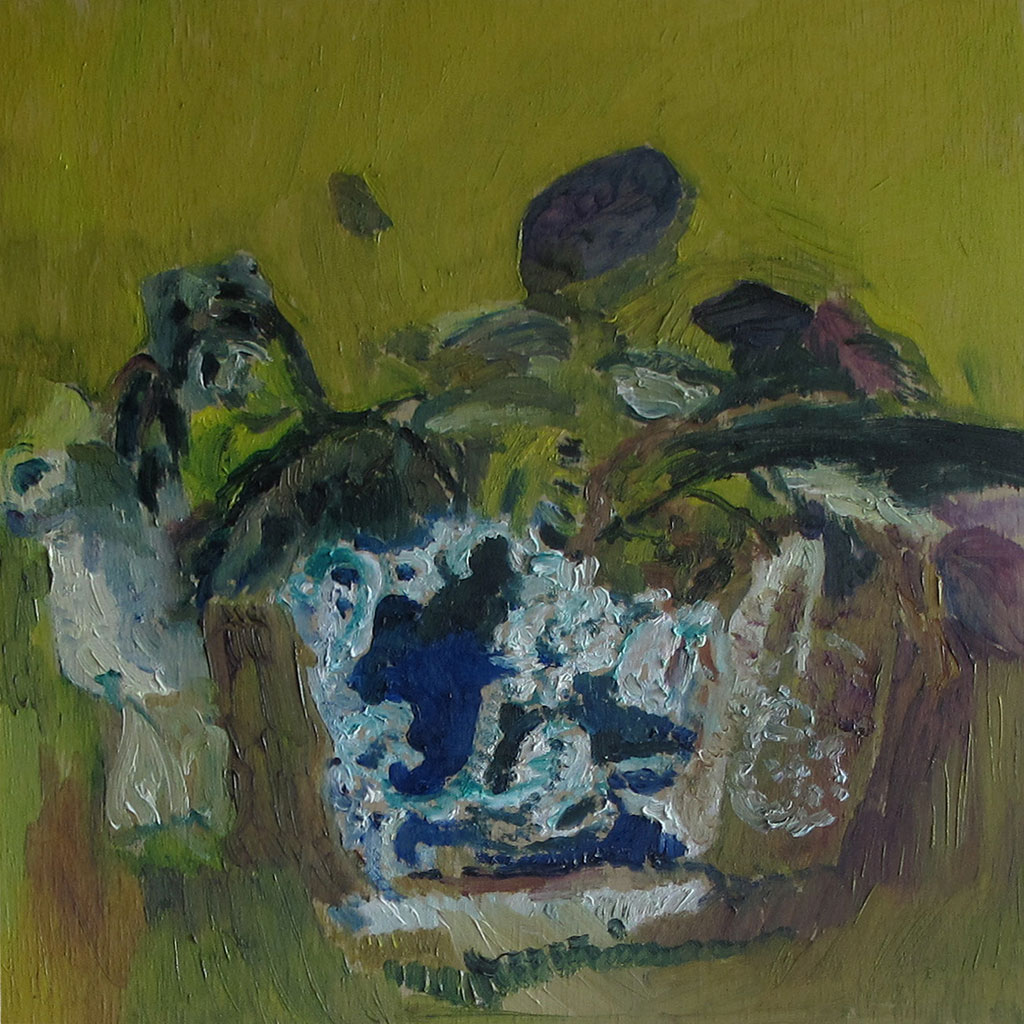 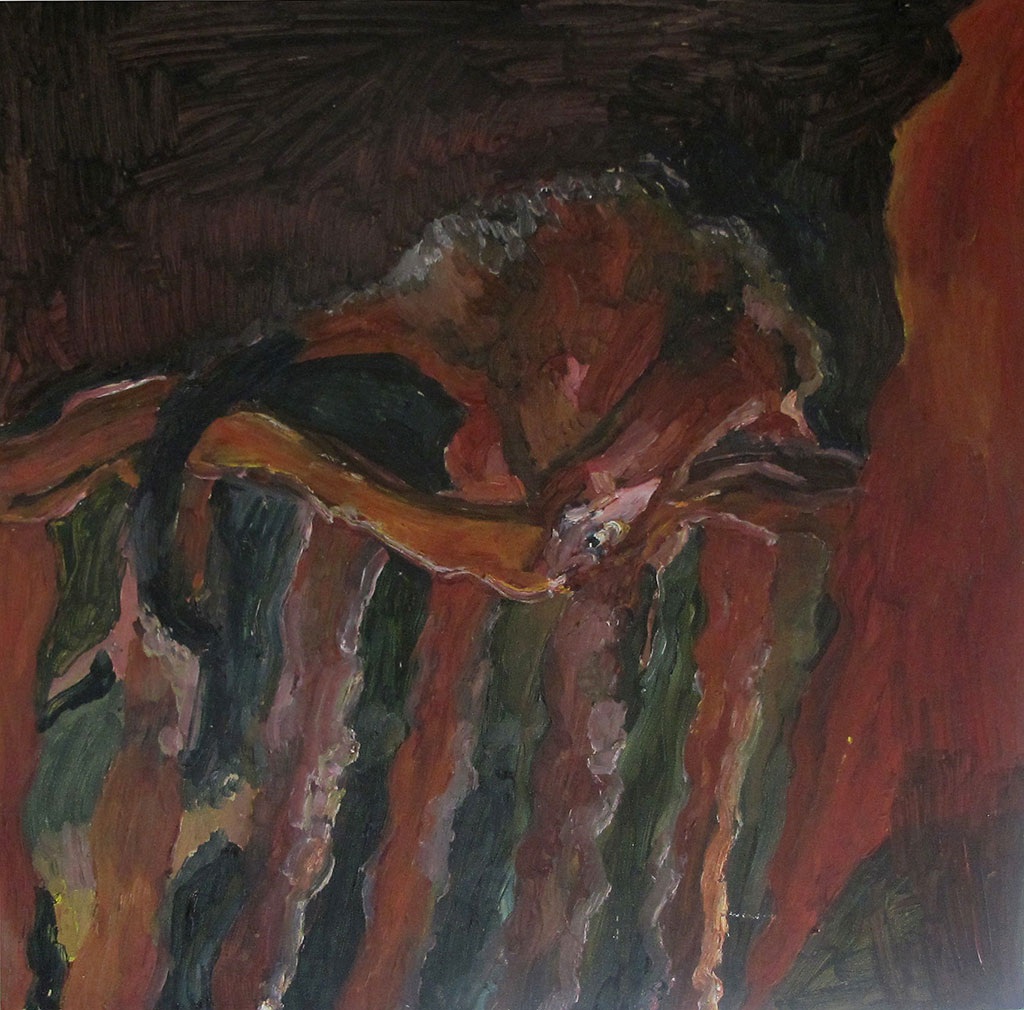 Maryam Riazi spent most her young adult life in the quiet city of Shiraz, known for its poets, philosophers and the sweet smell of orange blossoms. She grew up having nature as an important force, thus, its constant closeness and warmth is what she misses the most in her current life in Los Angeles.

Inspiration from nature and all of its creatures, mountains, and plants is felt throughout her work. Her fingers craft with patience, shaping the cool and earthy material into its next form. Maryam finds a calming satisfaction in embellishing each piece with intricate detail and texture.

Maryam works as a design consultant and stylist. She studied Fashion Design at Otis Parsons School of Design as well as at FIDM in Los Angeles. For the past several years, she has been eagerly learning the art of silversmithing, ceramics, jewelry making and weaving at a local studio. 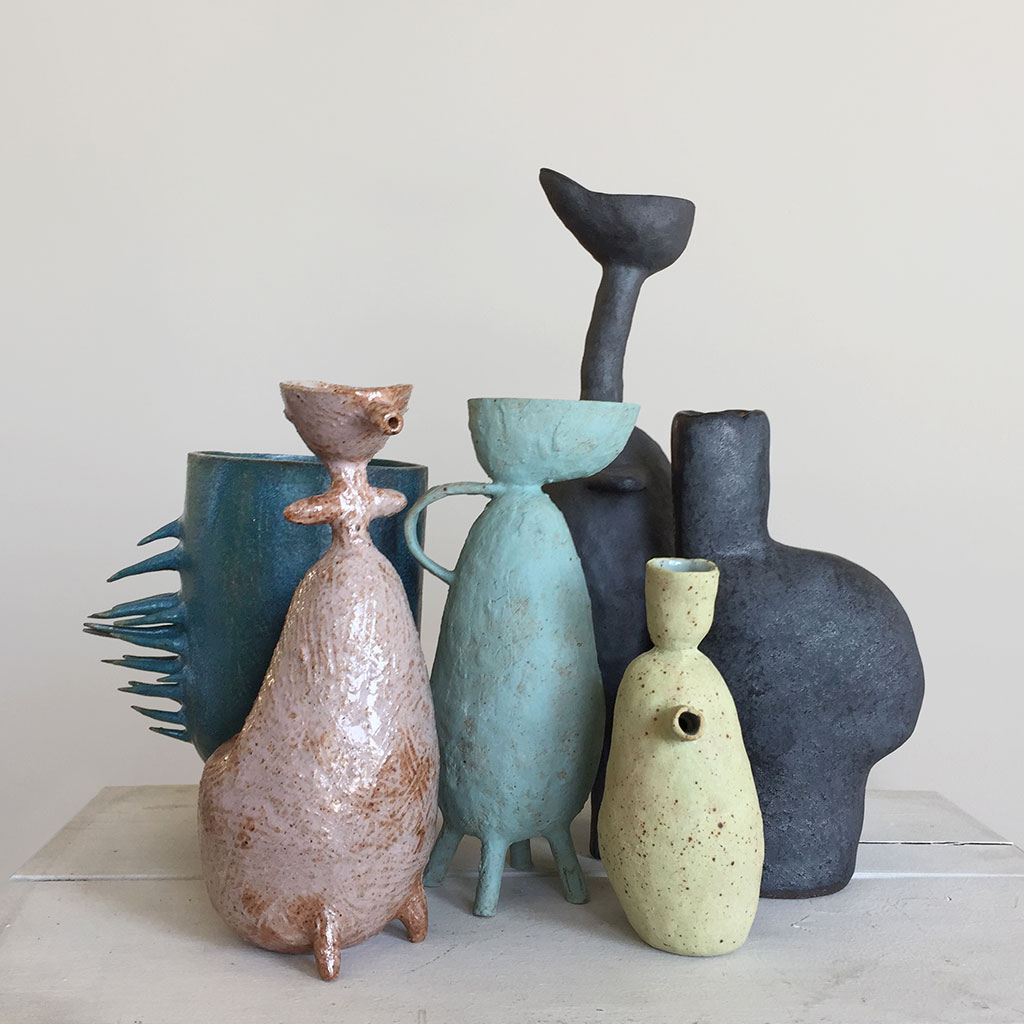 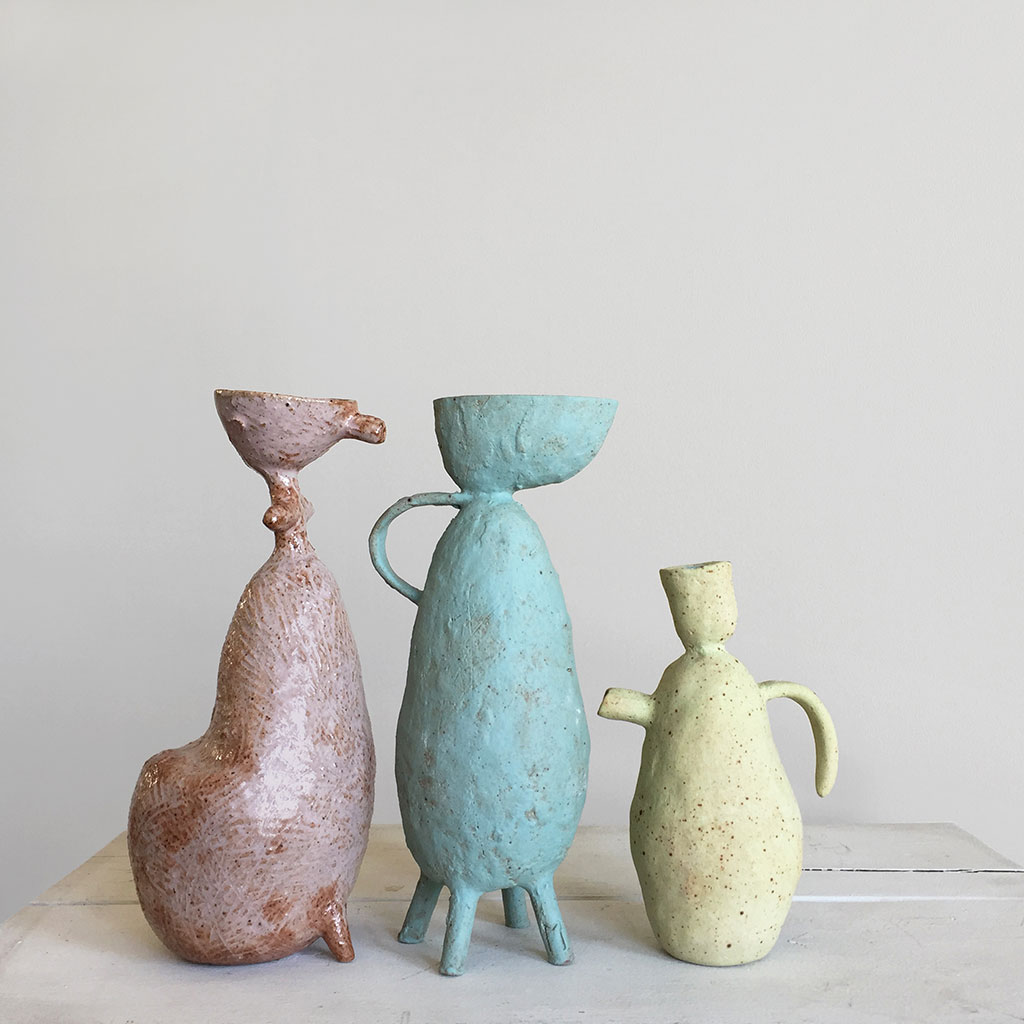 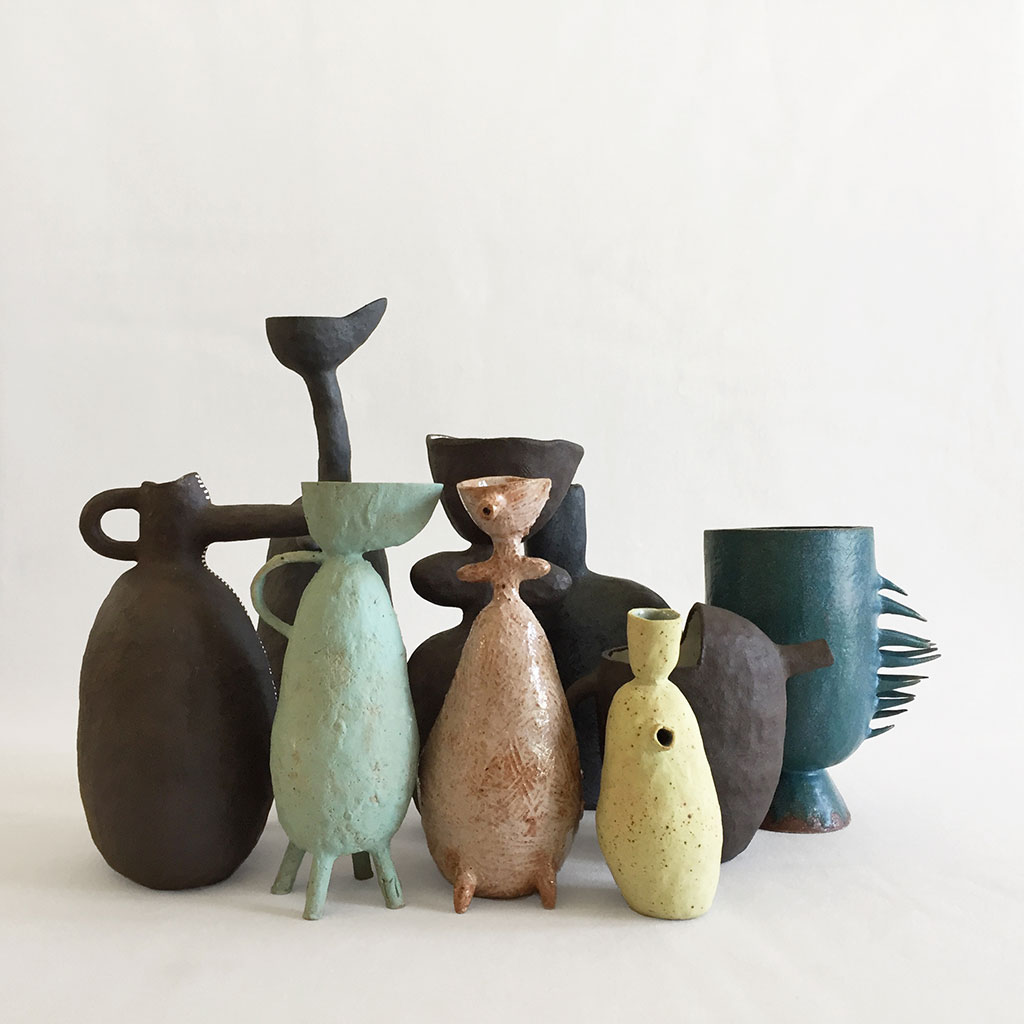 At Saint Cloche we believe that collaboration cult

“In GOLDEN HOUR I am looking through a kaleidosc

“With Tatsiana’s sculptures, I am reminded of