Panel Discussion:
How do Artists help us see things that can’t be seen?

If you missed the live event, watch the discussion here:

When Saint Cloche debuted at Sydney Contemporary 2019 we presented a live panel discussion event on Opening Night at Carriageworks on the topic, Colour Is My Super Power. This year, even with all the postponements and pivoting to Explore Contemporary online, we wanted to do it again. We are very pleased and excited to present another Opening Night panel discussion, this time virtually via Zoom for all to enjoy!

The panel will discuss the unique way each artist views the world – how does their perception differ from non-artists? Everyone sees the same things, but artists see different things in them, and each artist sees in a unique way to other artists. Naturally, you would think that an artist needs to have a anomalous world outlook to create a distinctive work of art….true or false?

Artists are a vehicle for expressing universal emotion. Art is about connecting with people’s emotions and it’s both personal and universal simultaneously. The artist is a Shaman that ‘absorbs’ atmosphere of a place or memory and acts as a conduit of expression in the medium of mark-making that ultimately lead to an emotional response and feeling of connection in the viewer. 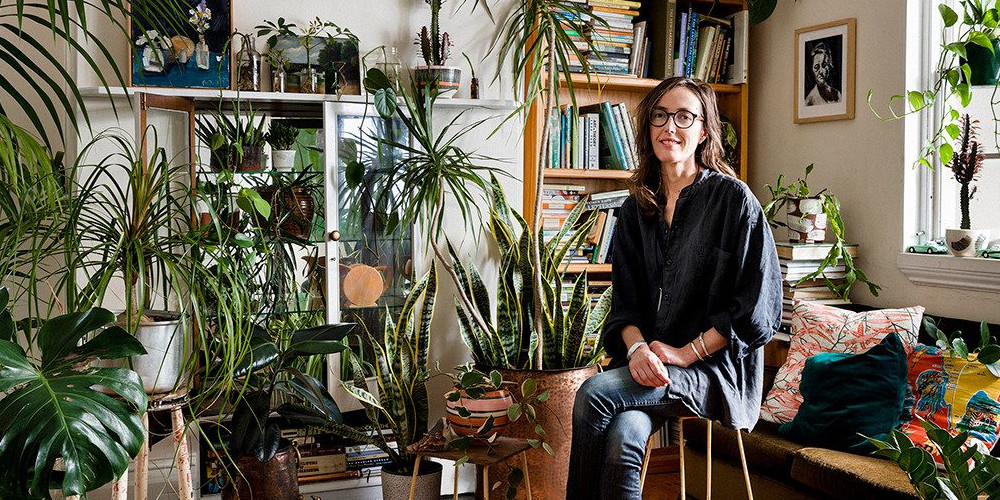 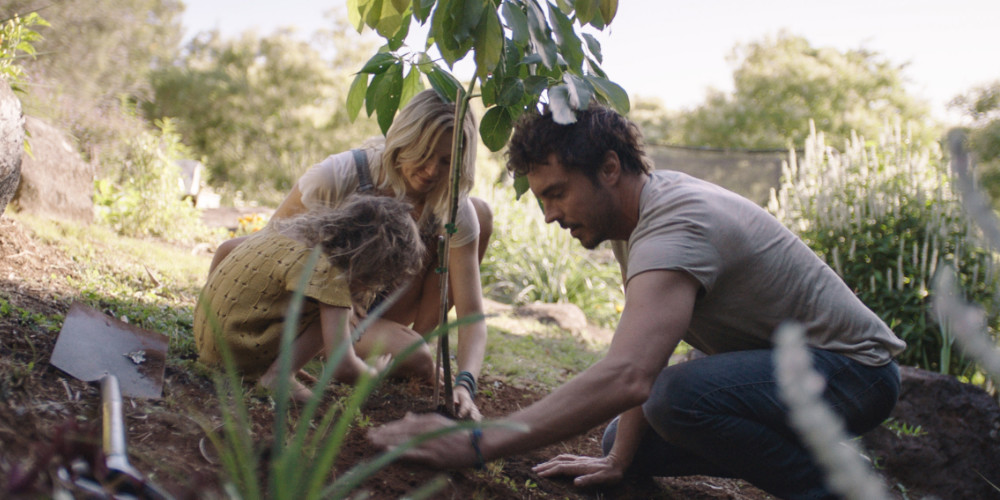 Damon Gameau is a well-known and highly respected Australian film actor and award- winning director (That Sugar Film and 2040). In the 2040 feature documentary film, Damon takes a look at the future, taking a unique approach with solutions-based thinking, researching ideas and operations that are existing and looking to make a positive change right now.

Motivated by concerns for the planet his daughter would inherit, Damon travels the globe meeting innovators and changemakers, creating a template for fixing the future if you like, across climate, economics, technology, society, agriculture and sustainability, Damon helps map out a path towards an ecologically sustainable and equitable future. 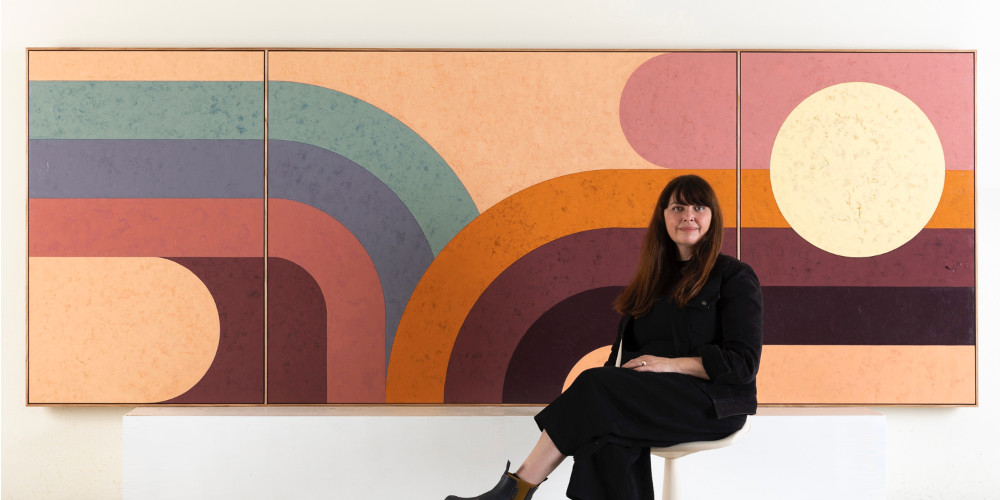 Bec Smith is a Melbourne-based artist who has practiced art and design in both Australia and overseas for over 20 years. In pursuit of her creative practice Bec has studied at The Art Academy in London, the Art Room in Melbourne, RMIT and Swinburne National School of Design where she holds a Bachelor degree.

Bec has always stayed particularly interested in abstract, non- objective, and colourfield paintings from the early part of the last century – a natural extension of a designer’s grounding in the early design language of the Bauhaus, equally with her interest in 20th century postmodernism. Her works are realisations of actual and idealised situations about the dynamics of people translated into static, photograph-like frames. A particular moment in time for what it may be or may become – fiction, non-fiction and multiple truths.

Bec has been selected for the Belle Art Prize, exhibited at the Melbourne Design Festival on multiple occasions, and her work is held in private collections. 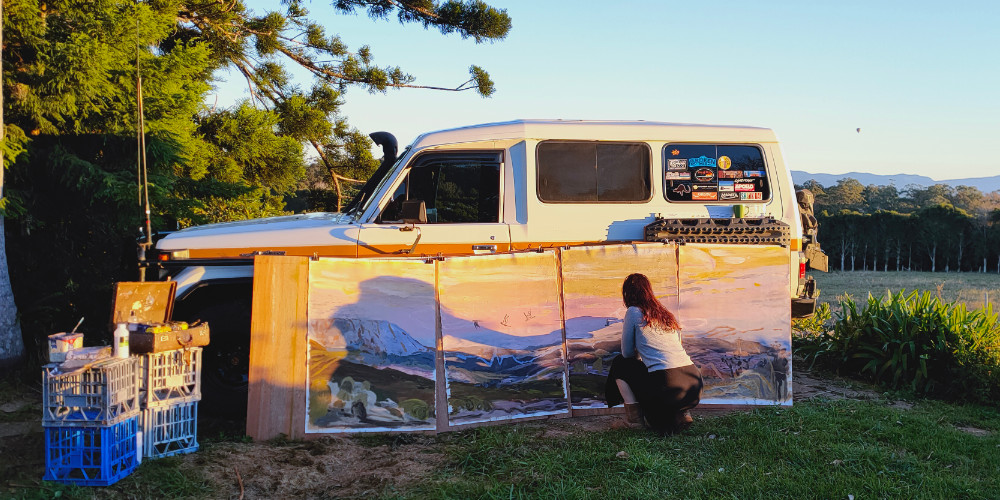 Emily continuously takes herself into the land exploring ways  to translate experience into paintings. Inspired by the resilience found within nature, the landscape has become a metaphor for her own psychology.

Her works explore vivifying forces of nature, whilst also encouraging her audience to reflect on the impact humanity assails upon the world. Set in foundations of ‘en plein air’ painting she attempts to push beyond exclusively visual stimuli by reflecting upon memories.

From 2018 – 2021 Emily traversed the country, living and working out of her trusty Toyota Troopy. A formative experience that highlighted a consciousness of the tensions embedded in landscape traditions and Australia’s sustained colonisation.

Emily was awarded the Macquarie Group Emerging Artist Prize in 2019 for her work ‘Alive in the Dead of Night’. Most recently, she received a Brett Whiteley Travelling Art Scholarship, 202. She has multiple works in private collections, works in the Macquarie Group Collection, Ballina Shire Council’s collection, Law Courts Building at Queen’s Square and is represented by Saint Cloche Gallery.

Justin Maurice Scivetti is a figurative Landscape painter based in Melbourne. His artistic practice is balanced by a career in horticulture and landscaping, as well as nourishing his passion for plants working at a nursery.

Floating somewhere between the real and unreal, his landscapes imbue a type of fantasy; they appear mysterious and other-worldly conjuring a quiet stillness. They are inspired by the natural and built environment, exploring subtleties in colour and light to bring the works to life.

Justin has a Bachelor of Fine Arts – Printmaking, after graduating from the National Art School in 2011, a Diploma of Fine Arts – Painting & Photography, St. George TAFE, Sydney in 2008, and more recently, a Diploma of applied Horticultural Science – Melbourne Polytechnic, 2017. He has been exhibited in numerous exhibitions in Sydney, and Melbourne, and has been a finalist in several art prizes – including receiving the Oil Painting Prize in the Waverly Art Prize 2019.