A beautiful alignment between an artist and designer;  their state of mind expressed through painting and slow fashion.

Returning for her second solo show with Saint Cloche, following a sell-out show last year, Hannah Nowlan is quickly establishing herself as an emerging artist to watch. Meditations on afterlife, death, duality, mythology and spirituality, Hannah’s paintings are offered up in a state of reverence and letting go. Much like the raw, exposed linen she loves to work with, Hannah’s paintings render an introspective view into her often shifting, refracted and sensitive state of being.

With TUNDRA, Hannah continues to process important experiences of her life through her work, unearthing personal shadows as a method of healing. Inspired by an organic, paired-back and exposed set of materials; she saturates personal narratives with ancient symbolism.

The dark themes of the work are cleansed and eased by an understated palette; restraint on colour and instead focussing on the sincerity of material and texture – as well as the ephemeral nature of shadows and spirits.

“Creating paintings for me, is an antidote to the granular states of life. The brevity and unpredictable aspects of the human condition can be broken down in my studio and in my mind. Painting allows me this therapy to dissect emotion in a safe, internal environment, before letting it all go like a temple offering.

TUNDRA feels incredibly stripped back and honest. A refraction of my work that looks closely to archetypal imagery and archaic symbols to find a stable place within the mind’s wilderness. I’m imagining a plane; tundra, field, desert, ocean. There is form and texture along with vastness, and almost no defining features within the landscape. It can be hard to differentiate between symbols. There are moments of clarity followed by hazy clouds of ambiguity.”

My General Store is small considered collections made from natural fibres in simple shapes.  Designed and made in Australia with fabrics sourced ethically from around the globe. Founder Michelle Glew-Ross has spent her career in the fashion industry, working in public relations and brand development.  In 2016 she launched My General Store.

“At My General Store, we focus on quality craftsmanship in simple shapes that can be worn time and time again. We produce limited numbers as waste is not encouraged.  We strive to keep our precious planet at the forefront of mind on everything we do.” 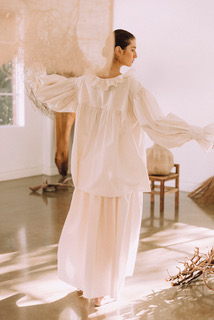